Oxidosqualene cyclases (OSCs) are enzymes that play a key role in control of the biosynthesis of phytosterols and triterpene saponins. In order to uncover OSC genes from Polygala tenuifolia seedlings induced by methyl jasmonate (MeJA), RNA-sequencing analysis was performed using the Illumina sequencing platform. A total of 148,488,632 high-quality reads from two samples (control and the MeJA treated) were generated. We screened genes related to phytosterol and triterpene saponin biosynthesis and analyzed the transcriptional changes of differentially expressed unigene (DEUG) values calculated by fragments per kilobase million (FPKM). In our datasets, two full-length cDNAs of putative OSC genes, PtCAS1, and PtCAS2, were found, in addition to the PtBS (β-amyrin synthase) gene reported in our previous studies and the two cycloartenol synthase genes of P. tenuifolia. All genes were isolated and characterized in yeast cells. The functional expression of the two PtCAS genes in yeast cells showed that the genes all produce a cycloartenol as the sole product. When qRT-PCR analysis from different tissues was performed, the expressions of PtCAS1 and PtCAS2 were highest in flowers and roots, respectively. After MeJA treatment, the transcripts of PtCAS1 and PtCAS2 genes increased by 1.5- and 2-fold, respectively. Given these results, we discuss the potential roles of the two PtCAS genes in relation to triterpenoid biosynthesis. View Full-Text
Keywords: cycloartenol synthase; oxidosqualene cyclase; phytosterols; triterpenoids; Polygala tenuifolia cycloartenol synthase; oxidosqualene cyclase; phytosterols; triterpenoids; Polygala tenuifolia
►▼ Show Figures 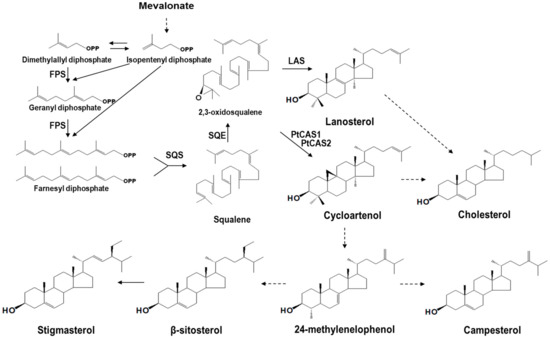