Tunisian Milk Thistle: An Investigation of the Chemical Composition and the Characterization of Its Cold-Pressed Seed Oils
Previous Article in Journal

Argan Oil as an Effective Nutri-Therapeutic Agent in Metabolic Syndrome: A Preclinical Study

The present study aims at examining the effects of argan oil on the three main cardiovascular risk factors associated with metabolic syndrome (hypertension, insulin resistance and obesity) and on one of its main complications, neuropathic pain. Male Sprague-Dawley rats had free access to a drinking solution containing 10% d-glucose or tap water for 12 weeks. The effect of argan oil was compared to that of corn oil given daily by gavage during 12 weeks in glucose-fed rats. Glucose-fed rats showed increases in systolic blood pressure, epididymal fat, plasma levels of triglycerides, leptin, glucose and insulin, insulin resistance, tactile and cold allodynia in association with a rise in superoxide anion production and NADPH oxidase activity in the thoracic aorta, epididymal fat and gastrocnemius muscle. Glucose-fed rats also showed rises in B1 receptor protein expression in aorta and gastrocnemius muscle. Argan oil prevented or significantly reduced all those anomalies with an induction in plasma adiponectin levels. In contrast, the same treatment with corn oil had a positive impact only on triglycerides, leptin, adiponectin and insulin resistance. These data are the first to suggest that argan oil is an effective nutri-therapeutic agent to prevent the cardiovascular risk factors and complications associated with metabolic syndrome. View Full-Text
Keywords: metabolic syndrome; oxidative stress; kinin receptors; argan oil metabolic syndrome; oxidative stress; kinin receptors; argan oil
►▼ Show Figures 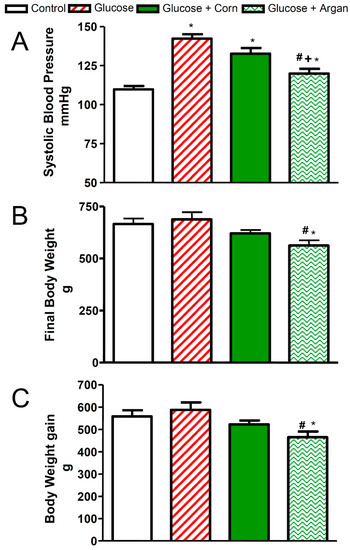