Applications of Alternative Nucleases in the Age of CRISPR/Cas9

The recent advancement in genome editing such a CRISPR/Cas9 system has enabled isolation of cells with knocked multiple alleles through a one-step transfection. Somatic cell nuclear transfer (SCNT) has been frequently employed as one of the efficient tools for the production of genetically modified (GM) animals. To use GM cells as SCNT donor, efficient isolation of transfectants with mutations at multiple target loci is often required. The methods for the isolation of such GM cells largely rely on the use of drug selection-based approach using selectable genes; however, it is often difficult to isolate cells with mutations at multiple target loci. In this study, we used a novel approach for the efficient isolation of porcine cells with at least two target loci mutations by one-step introduction of CRISPR/Cas9-related components. A single guide (sg) RNA targeted to GGTA1 gene, involved in the synthesis of cell-surface α-Gal epitope (known as xenogenic antigen), is always a prerequisite. When the transfected cells were reacted with toxin-labeled BS-I-B4 isolectin for 2 h at 37 °C to eliminate α-Gal epitope-expressing cells, the surviving clones lacked α-Gal epitope expression and were highly expected to exhibit induced mutations at another target loci. Analysis of these α-Gal epitope-negative surviving cells demonstrated a 100% occurrence of genome editing at target loci. SCNT using these cells as donors resulted in the production of cloned blastocysts with the genotype similar to that of the donor cells used. Thus, this novel system will be useful for SCNT-mediated acquisition of GM cloned piglets, in which multiple target loci may be mutated. View Full-Text
Keywords: α-Gal epitope; α-1,3-galactosyltransferase; CRISPR/Cas9; targeted toxin; genome editing; isolectin BS-I-B4; LDLR; PTEN; p53 α-Gal epitope; α-1,3-galactosyltransferase; CRISPR/Cas9; targeted toxin; genome editing; isolectin BS-I-B4; LDLR; PTEN; p53
►▼ Show Figures 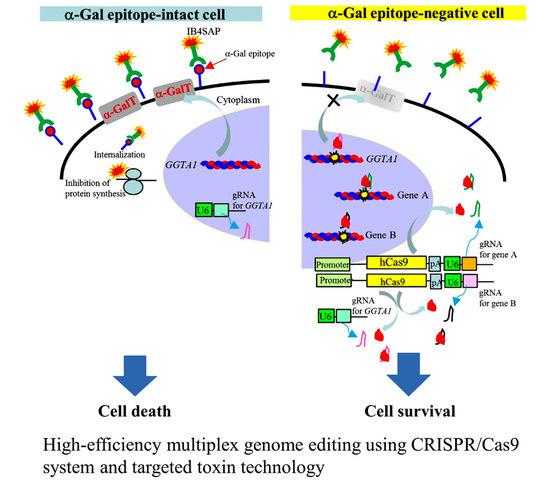