The Venom of the Spine-Bellied Sea Snake (Hydrophis curtus): Proteome, Toxin Diversity and Intraspecific Variation
Next Article in Special Issue

Tongue Sole CD209: A Pattern-Recognition Receptor that Binds a Broad Range of Microbes and Promotes Phagocytosis

The survival and foraging of Coptotermes formosanus Shiraki in a microbe-rich environment reflect the adaptation of an extraordinary, sophisticated defense mechanism by the nest-mates. We aimed to explore the host pathogen interaction by studying caste-specific volatile chemistry and genes encoding the antioxidant defense of winged imagoes, nymphs, soldiers and workers of Formosan subterranean termites. Qualitative analyses of C. formosanus Shiraki performed by HS-SPME/GC-MS showed considerable variations in the chemical composition of volatile organic compounds (VOCs) and their proportions among all the castes. Winged imagoes produced the most important compounds such as naphthalene and n-hexanoic acid. The antifungal activity of these compounds along with nonanal, n-pentadecane, n-tetradecane, n-heptadecane and methyl octanoate against the conidial suspensions of Metarhizium anisopliae and Beauveria bassiana isolates enable us to suggest that the failure of natural fungal infection in the nest is due to the antiseptic environment of the nest, which is mainly controlled by the VOCs of nest-mates. In addition, conidial germination of M. anisopliae and B. bassiana isolates evaluated on the cuticle of each caste showed significant variations among isolates and different castes. Our results showed that the conidia of M. anisopliae 02049 exhibited the highest germination on the cuticle of all the inoculated castes. Moreover, we recorded the lowest germination of the conidia of B. bassiana 200436. Caste-specific germination variations enabled us to report for the first time that the cuticle of winged imagoes was found to be the most resistant cuticle. The analysis of the transcriptome of C. formosanus Shiraki revealed the identification of 17 genes directly involved in antioxidant defense. Expression patterns of the identified antioxidant genes by quantitative real-time PCR (qPCR) revealed the significantly highest upregulation of CAT, GST, PRXSL, Cu/Zn-SOD2, TXN1, TXN2, TXNL1, TXNL2, TXNL4A and TPx genes among winged imagoes upon infection with the most virulent isolate, M. anisopliae 02049. Furthermore, soldiers showed the least expression of genes encoding antioxidant defense. Our findings indicated that the volatile chemistry of nest-mates and genes encoding antioxidant defense greatly contribute to the survival and foraging of Formosan subterranean termites in a microbe-rich habitat. View Full-Text
Keywords: antioxidant defense; castes; disease resistance; HS-SPME; SEM; termites; volatiles antioxidant defense; castes; disease resistance; HS-SPME; SEM; termites; volatiles
►▼ Show Figures 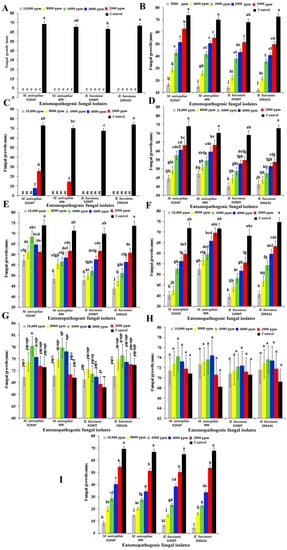