The Glyoxalase System and Methylglyoxal-Derived Carbonyl Stress in Sepsis: Glycotoxic Aspects of Sepsis Pathophysiology
Next Article in Special Issue

Elderberry and Elderflower Extracts, Phenolic Compounds, and Metabolites and Their Effect on Complement, RAW 264.7 Macrophages and Dendritic Cells

Marine invertebrates have been attracting the attention of researchers for their application in nutrition, agriculture, and the pharmaceutical industry, among others. Concerning sea anemones (Cnidaria), little is known regarding their metabolic profiles and potential value as a source of pharmacologically-active agents. In this work, the chemical profiles of two species of sea anemones Actinia equina and Anemonia sulcata, were studied by high-performance liquid chromatography with diode-array detection (HPLC-DAD) and its impact upon immune and gastric cells was evaluated. In both species, the methylpyridinium alkaloid homarine was the major compound in aqueous extracts. The extracts were effective in reducing lipopolysaccharide (LPS)-induced levels of nitric oxide (NO) and intracellular reactive oxygen species (ROS) in a macrophage model of inflammation. Both the extracts and the alkaloid homarine were effective in inhibiting phospholipase A2 (PLA2), a pivotal enzyme in the initial steps of the inflammatory cascade. In order to mimic the oral consumption of these extracts; their effect upon human gastric cells was evaluated. While no caspase-9 activation was detected, the fact that the endoplasmic reticulum-resident caspase-4, and also caspase-3, were activated points to a non-classical mechanism of apoptosis in human gastric cells. This work provides new insights on the toxicity and biological potential of sea anemones increasingly present in human nutrition. View Full-Text
Keywords: inflammation; sea anemones; gastric cells; macrophages; homarine; cytotoxicity inflammation; sea anemones; gastric cells; macrophages; homarine; cytotoxicity
►▼ Show Figures 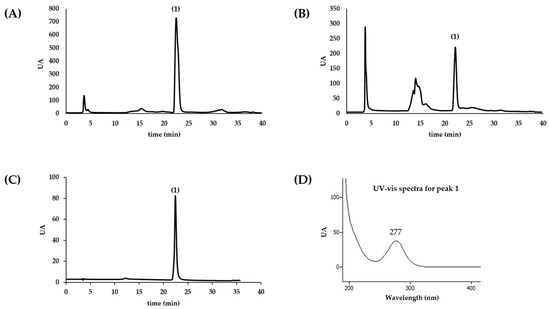