Health Effects of Psidium guajava L. Leaves: An Overview of the Last Decade
Next Article in Special Issue

Perfluorooctane sulfonate (PFOS), a new kind of persistent organic pollutant, is widely distributed in the environment and exists in various organisms, where it is also a neurotoxic compound. However, the potential mechanism of its neurotoxicity is still unclear. To examine the role of epigenetics in the neurotoxicity induced by PFOS, SK-N-SH cells were treated with different concentrations of PFOS or control medium (0.1% DMSO) for 48 h. The mRNA levels of DNA methyltransferases (DNMTs) and Brain-derived neurotrophic factor (BDNF), microRNA-16, microRNA-22, and microRNA-30a-5p were detected by Quantitative PCR (QPCR). Enzyme Linked Immunosorbent Assay (ELISA) was used to measure the protein levels of BDNF, and a western blot was applied to analyze the protein levels of DNMTs. Bisulfite sequencing PCR (BSP) was used to detect the methylation status of the BDNF promoter I and IV. Results of MTT assays indicated that treatment with PFOS could lead to a significant decrease of cell viability, and the treated cells became shrunk. In addition, PFOS exposure decreased the expression of BDNF at mRNA and protein levels, increased the expression of microRNA-16, microRNA-22, microRNA-30a-5p, and decreased the expression of DNMT1 at mRNA and protein levels, but increased the expression of DNMT3b at mRNA and protein levels. Our results also demonstrate that PFOS exposure changes the methylation status of BDNF promoter I and IV. The findings of the present study suggest that methylation regulation of BDNF gene promoter and increases of BDNF-related-microRNA might underlie the mechanisms of PFOS-induced neurotoxicity. View Full-Text
Keywords: PFOS; BDNF; DNMTs; microRNA; DNA methylation PFOS; BDNF; DNMTs; microRNA; DNA methylation
►▼ Show Figures 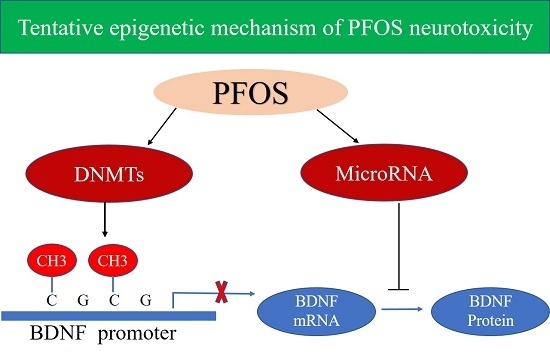