Here, dual-sensitive fluorescent branched alginate-polyethyleneimine copolymer (bAPSC) nanogels were synthesized from thiolated alginate and stearoyl-derivatized branched polyethyleneimine. The formation of bAPSC conjugates was confirmed through proton nuclear magnetic resonance and Fourier transform infrared spectroscopy, whereas dynamic light scattering was used to measure the particle size and ζ potential of the nanogels. The fluorescent properties of the nanogels were confirmed through fluorescent spectroscopy and microscopy. In addition to the excitation-dependent fluorescence behavior, the fluorescence emission intensity of bAPSC was altered by both pH and γ-irradiation. This intensity was higher at a lower pH than at a higher pH, and it slightly decreased after γ-irradiation. The drug loading and encapsulation efficiency of bAPSC were 25.9% and 11.2%, respectively. An in vitro drug release study revealed that the synthesized nanogels release their doxorubicin (Dox) contents in a time-dependent manner, and the drug release was higher after 96 h of incubation. Approximately 43.74% and 88.36% of Dox was released after 96 h of incubation at pH 5.5 in the absence and presence of glutathione (GSH), respectively. However, relatively lower drug release, approximately 21.6% and 16%, was observed in the presence and absence of GSH at pH 7.4, respectively. Fluorescence microscopy confirmed that Dox-loaded bAPSC nanogels were internalized by HeLa cells, and drug distribution was easily tracked using fluorescent materials without additional probing agents. Moreover, cellular cytotoxicity and hemolysis results revealed less cytotoxicity and hemocompatibility of the synthesized nanogels, confirming that they are the most favorable alternative drug carriers for drug delivery systems. View Full-Text
Keywords: redox-sensitive; nanogel; alginate; polyethyleneimine; fluorescent organic nanoparticles redox-sensitive; nanogel; alginate; polyethyleneimine; fluorescent organic nanoparticles
►▼ Show Figures 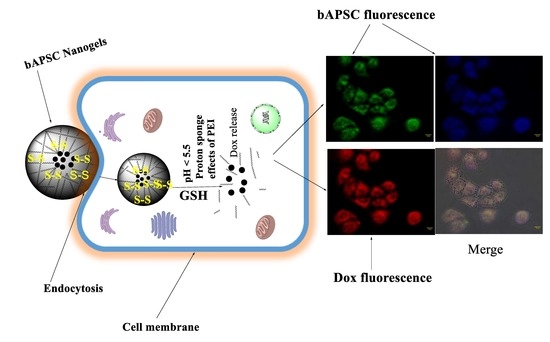