Transposable Elements in Human Cancer: Causes and Consequences of Deregulation

In this review, the sugar portions of glycoproteins, glycolipids, and glycosaminoglycans constitute the glycome, and the genes involved in their biosynthesis, degradation, transport and recognition are referred to as “glycogenes”. The extreme complexity of the glycome requires the regulatory layer to be provided by the epigenetic mechanisms. Almost all types of cancers present glycosylation aberrations, giving rise to phenotypic changes and to the expression of tumor markers. In this review, we discuss how cancer-associated alterations of promoter methylation, histone methylation/acetylation, and miRNAs determine glycomic changes associated with the malignant phenotype. Usually, increased promoter methylation and miRNA expression induce glycogene silencing. However, treatment with demethylating agents sometimes results in silencing, rather than in a reactivation of glycogenes, suggesting the involvement of distant methylation-dependent regulatory elements. From a therapeutic perspective aimed at the normalization of the malignant glycome, it appears that miRNA targeting of cancer-deranged glycogenes can be a more specific and promising approach than the use of drugs, which broad target methylation/acetylation. A very specific type of glycosylation, the addition of GlcNAc to serine or threonine (O-GlcNAc), is not only regulated by epigenetic mechanisms, but is an epigenetic modifier of histones and transcription factors. Thus, glycosylation is both under the control of epigenetic mechanisms and is an integral part of the epigenetic code. View Full-Text
Keywords: glycome; glycosyltransferases; DNA methylation; miRNA targeting glycome; glycosyltransferases; DNA methylation; miRNA targeting
►▼ Show Figures 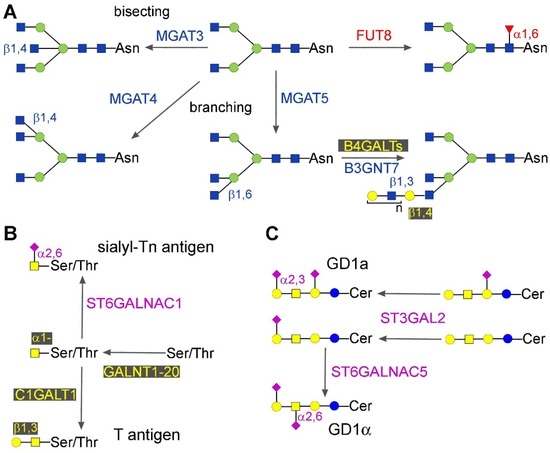