Background. In the last few decades, a better knowledge of the inflammatory pathways involved in the pathogenesis of Inflammatory Bowel Disease (IBD) has promoted biological therapy as an important tool to treat IBD patients. However, in spite of a wider spectrum of biological drugs, a significant proportion of patients is unaffected by or lose their response to these compounds, along with increased risks of infections and malignancies. For these reasons there is an urgent need to look for new pharmacological targets. The novel Phosphodiesterase 4 (PDE4) inhibitors have been recently introduced as new modulators of intracellular signals and gene transcription for the treatment of IBD. Aim. To discuss and describe the state of the art of this new class of compounds in the IBD field, with particular attention to apremilast. Methods. Published articles selected from PubMed were comprehensively reviewed, with key words including apremilast, inflammatory disease, IBD, psoriasis, psoriatic arthritis, pathogenesis, therapies, and treatment. Results. PDE4 inhibitors generate elevated intracellular levels of cyclic Adenosine Monophosphate (cAMP), that consequently down-regulate the release of pro-inflammatory cytokines in the mucosa of IBD patients. The newly developed apremilast is one of these drugs and has already been approved for the treatment of dermatologic/rheumatologic inflammatory conditions; studies in psoriasis and psoriatic arthritis have in fact demonstrated its clinical activity. However, no clinical trials have yet been published on the use of apremilast in IBD. Conclusion. In light of the similarity of pro-inflammatory signaling pathways across the gut, the skin, and joints, apremilast is likely supposed to show its efficacy also in IBD. View Full-Text
Keywords: PDE4; Inflammatory Bowel Disease; apremilast PDE4; Inflammatory Bowel Disease; apremilast
►▼ Show Figures 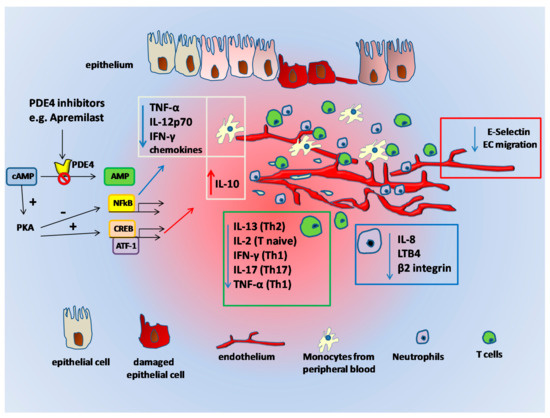