Two Coiled-Coil Proteins, WEB1 and PMI2, Suppress the Signaling Pathway of Chloroplast Accumulation Response that Is Mediated by Two Phototropin-Interacting Proteins, RPT2 and NCH1, in Seed Plants
Next Article in Special Issue

Prevention of Gastric Cancer: Eradication of Helicobacter Pylori and Beyond
Previous Article in Journal

Background: We hypothesized that video-assisted thoracic surgery (VATS) lung metastasectomy under non-intubated anesthesia may have a lesser immunological and inflammatory impact than the same procedure under general anesthesia. Methods: Between December 2005 and October 2015, 55 patients with pulmonary oligometastases (at the first episode) successfully underwent VATS metastasectomy under non-intubated anesthesia. Lymphocytes subpopulation and interleukins 6 and 10 were measured at different intervals and matched with a control group composed of 13 patients with similar clinical features who refused non-intubated surgery. Results: The non-intubated group demonstrated a lesser reduction of natural killer lymphocytes at 7 days from the procedure (p = 0.04) compared to control. Furthermore, the group revealed a lesser spillage of interleukin 6 after 1 (p = 0.03), 7 (p = 0.04), and 14 (p = 0.05) days. There was no mortality in any groups. Major morbidity rate was significantly higher in the general anesthesia group 3 (5%) vs. 3 (23%) (p = 0.04). The median hospital stay was 3.0 vs. 3.7 (p = 0.033) days, the estimated costs with the non-intubated procedure was significantly lower, even excluding the hospital stay. Conclusions: VATS lung metastasectomy in non-intubated anesthesia had significantly lesser impact on both immunological and inflammatory response compared to traditional procedure in intubated general anesthesia. View Full-Text
Keywords: lung metastases; non-intubated surgery; video-assisted thoracic surgery lung metastases; non-intubated surgery; video-assisted thoracic surgery
►▼ Show Figures 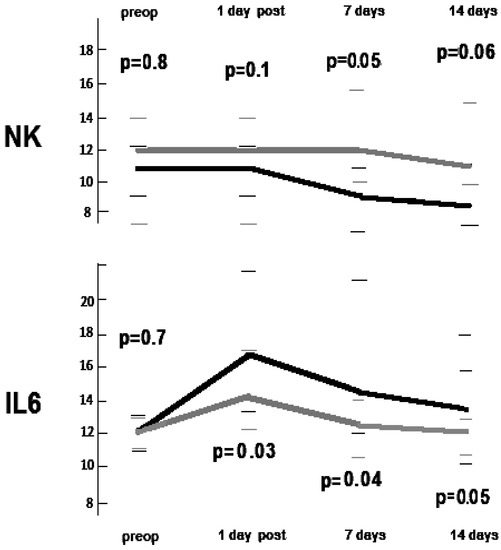