Personalized Medicine: New Perspectives for the Diagnosis and the Treatment of Renal Diseases

The aim of this study was to evaluate the ability of Neutrophil Gelatinase-Associated Lipocalin (NGAL) to predict clinically relevant worsening renal function (WRF) in acute heart failure (AHF). Plasma NGAL and serum creatinine changes during the first 4 days of admission were investigated in 1447 patients hospitalized for AHF and enrolled in the Placebo-Controlled Randomized Study of the Selective A1Adenosine Receptor Antagonist Rolofylline for Patients Hospitalized with Acute Decompensated Heart Failure and Volume Overload to Assess Treatment Effect on Congestion and Renal Function (PROTECT) study. WRF was defined as serum creatinine rise ≥ 0.3 mg/dL through day 4. Biomarker patterns were described using linear mixed models. WRF developed in 325 patients (22%). Plasma NGAL did not rise earlier than creatinine in patients with WRF. After multivariable adjustment, baseline plasma NGAL, but not creatinine, predicted WRF. AUCs for WRF prediction were modest (<0.60) for all models. NGAL did not independently predict death or rehospitalization (p = n.s.). Patients with WRF and high baseline plasma NGAL had a greater risk of death, and renal or cardiovascular rehospitalization by 60 days than patients with WRF and a low baseline plasma NGAL (p for interaction = 0.024). A rise in plasma NGAL after baseline was associated with a worse outcome in patients with WRF, but not in patients without WRF (p = 0.007). On the basis of these results, plasma NGAL does not provide additional, clinically relevant information about the occurrence of WRF in patients with AHF. View Full-Text
Keywords: heart failure; Neutrophil Gelatinase-Associated Lipocalin; NGAL; creatinine; worsening renal function; acute heart failure heart failure; Neutrophil Gelatinase-Associated Lipocalin; NGAL; creatinine; worsening renal function; acute heart failure
►▼ Show Figures 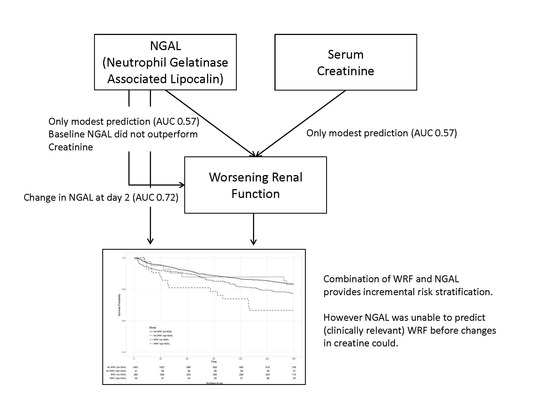