Can We Predict the Efficacy of Anti-TNF-α Agents?
Previous Article in Journal

Vedolizumab, a gut-specific biological treatment for inflammatory bowel disease (IBD), is an antibody that binds to the α4β7 integrin and blocks T-cell migration into intestinal mucosa. We aimed to investigate chemokine levels in serum of IBD-patients treated with vedolizumab. In this pilot study, we included 11 IBD patients (8 Crohn’s disease, 3 ulcerative colitis) previously non-respondent to anti-tumor necrosis factor (TNF)-agents. Patients received vedolizumab at week 0, 2 and 6 and were evaluated for clinical efficacy at week 10. Clinical characteristics and routine laboratory parameters were obtained and patients were classified as responders or non-responders. Expression of 21 chemokines in serum was measured using Proximity Extension Assay and related to clinical outcome. At week 10, 6 out of 11 patients had clinically responded. Overall expression of CCL13 increased after treatment. In non-responders, expression of CCL13 and CXCL8 increased after treatment, and CCL20 and CXCL1 expressions were higher compared to responders. In responders, CCL28 decreased after treatment. C-reactive protein (CRP) correlated negatively with 6 chemokines before therapy, but not after therapy. Systemic CCL13 expression increases in IBD-patients after vedolizumab therapy and several chemokine levels differ between responders and non-responders. An increased CCL13-level when starting vedolizumab treatment, might indicate potential prognostic value of measuring chemokine levels when starting therapy with vedolizumab. This study provides new information on modulation of systemic chemokine levels after vedolizumab treatment.
Keywords: vedolizumab; chemokines; inflammatory bowel disease; biologics vedolizumab; chemokines; inflammatory bowel disease; biologics

Inflammatory bowel disease (IBD) is a group of chronic inflammatory diseases of the intestine and primarily includes ulcerative colitis (UC), Crohn’s disease (CD), and IBD-unclassified. In 2015, it was estimated that around 2.5 million people suffer from IBD in Europe, with the highest prevalence in Scandinavia and Great Britain, and this number is predicted to further increase [1]. Characterized as a multifactorial disease, the full pathogenesis is not completely understood, but includes a genetic predisposition, environmental factors, and impaired epithelial barrier and immune response [2,3,4,5]. Changes in chemokine levels in serum have been reported in IBD [6,7], however, assessment of circulating chemokine levels following biological treatment is poorly investigated.
More than 40 members of the chemokine family are described in humans divided into the C, CC, CXC, and CXC3 subfamily. Functionally, CC chemokines are mainly responsible for the recruitment of lymphocytes, whereas CXC chemokines have the highest ability to attract neutrophils and monocytes [8,9]. Besides the recruitment of effector cells, chemokines are involved in the adhesion and migration of leukocytes across the endothelium [9,10]. To reach the site of inflammation, circulating leukocytes migrate through the endothelium in highly controlled processes, where in the interaction between integrins expressed on effector cells and adhesion molecules expressed on endothelial cells is crucial; in such interactions the effector cells migrate with a high degree of specificity. All integrins are formed by large α and small β chains. In total 14 integrin combinations are described to regulate immune cell traffic in humans [11,12,13]. The specificity of the adhesion molecules differs, whereas vascular cell adhesion molecule 1 (VCAM-1) is expressed in the gut and the brain, mucosal addressin cell adhesion molecule-1 (MAdCAM-1) is only expressed in the intestine [14].
The use of synthesized antibodies, biological agents, targeting specific components of the innate and adaptive immune system has improved the treatment of IBD. Biologics targeting tumor necrosis factor α (TNF-α), such as infliximab, adalimumab, golimumab, and certolizumab, have greatly improved IBD treatment. Anti-TNF agents aim to block cytokine signaling and to initiate inflammatory clearance through induction of apoptosis, thereby dampening the inflammatory response [15].
Up to 40% of patients treated with anti-TNF agents do not initially respond and among those who achieve remission, 30–40% lose response over time [15,16]. Therefore, new therapeutic targets have been investigated. Natalizumab, an antagonist for α4 integrin subunit binds both, the α4β1 and α4β7 molecules expressed on lymphocytes needed for the binding to endothelial cells via VCAM-1 and MAdCAM-1, respectively, to enter the tissue [14]. Vedolizumab (Entyvio™, Takeda, Deerfield, IL, USA), so far the only gut-specific biological treatment approved for IBD-patients, is a humanized monoclonal antibody that binds the α4β7 integrin, and thus blocks the interaction with MAdCAM-1, which is expressed on endothelial cells. In 2013, the results from GEMINI I and II, two large phase III randomized controlled trials in UC and CD, respectively, demonstrated the effectiveness of vedolizumab in inducing and maintaining remission compared to placebo [17,18]. Further, vedolizumab might restore colonic expression of genes involved in leukocyte migration in UC responders after therapy [19]. Any potential modulation of systemic cytokine and chemokine levels following vedolizumab treatment has been poorly investigated.
In this open observational pilot study, we assessed the clinical response and circulating chemokine levels following vedolizumab treatment in IBD-patients previously non-responding to anti-TNF agents.

2.1. Clinical Findings of Inflammatory Bowel Disease-Patients after Treatment with Vedolizumab

Clinical characteristics at baseline (week 0) and follow-up (week 10) after vedolizumab treatment are presented in Table 1. At follow-up, there was an improvement in the HBI scores and decreased fecal calprotectin levels, however, these did not reach significance. Clinical response at week 10 was achieved in 6 of 11 patients (54%). When comparing the clinical parameters between responders and non-responders, there were no significant differences in age, gender, or smoking. Age at diagnosis tended to be higher in non-responders (16.8 ± 10.3 vs. 31.2 ± 14.4 years; p = 0.085). Baseline fecal calprotectin levels tended to be higher, whereas C-reactive protein (CRP) levels tended to be lower in responders compared to non-responders, however, this did not reach statistical significance.

2.2. Systemic Chemokine Levels in Inflammatory Bowel Disease-Patients before and after Treatment with Vedolizumab

We next analyzed serum levels in a total of 21 chemokines. In the whole group of patients, an increase in CCL13 (MCP-4) expression was seen after treatment (week 10) with vedolizumab (Figure 1A). The levels of all the other analyzed chemokines remained similar. When exploring chemokine levels with respect to clinical response, only non-responders presented increased expression of CCL13 (MCP-4) and CXCL8 (IL-8) after treatment compared to baseline (Figure 1B,C). At follow-up, levels of CCL20 (LARC) and CXCL1 (GRO-α) were higher in non-responders compared to responders (Figure 1D,E), these differences were not detected at baseline. Expression of CCL23 (MPIF-1) was higher in non-responders compared to responders both at baseline and after therapy (Figure 1F). The expression of CCL28 (MEC) decreased in the responders after treatment compared to baseline (Figure 1G).
We next performed a receiver operating characteristic (ROC) analysis to test whether CCL13 expression at baseline was predictive for clinical response. The area under the curve (AUC) was 0.833 (95% CI 0.58–1.00; p = 0.068), indicating that the CCL13 level at baseline might be of prognostic value for response when starting therapy with vedolizumab.

2.3. Correlations between Systemic Chemokine Levels and Clinical and Laboratory Parameters in Inflammatory Bowel Disease-Patients before and after Treatment with Vedolizumab

2.4. Chemokine Networks in Inflammatory Bowel Disease-Patients before and after Treatment with Vedolizumab

11 consecutive IBD-patients with active Crohn’s disease (CD) (n = 8) or ulcerative colitis (UC) (n = 3) with an insufficient initial response, loss of response, or intolerance to anti-TNF-antibodies were included. The mean age of the study group was 31.0 ± 16.9 years; there were 3 women and 8 men, and 2 were smokers. Patients were diagnosed according to standard clinical, endoscopic, and histopathological criteria. Exclusion criteria were pregnancy and/or breastfeeding, suspicion or confirmed tuberculosis, active hepatitis B or C, any malignancy in the 5 preceding years, ongoing severe infection, or opportunistic infections. Body mass index (BMI) was calculated as the weight divided by the square of the height. Disease activity was evaluated using the Harvey-Bradshaw index (HBI) for CD and Mayo index for UC. Patients were evaluated at baseline (week 0), they received three doses (300 mg each) of vedolizumab (Entyvio®) intravenously at week 0, 2 and 6, and were assessed for clinical efficacy at week 10. Response or not was determined by an experienced gastroenterologist at week 10 by using all available clinical information such as patient symptoms, serum-C-reactive protein (CRP), fecal calprotectin, and endoscopic picture. Clinical symptoms were scored by using Harvey-Bradshaw index (HBI) for CD patients and Partial Mayo Score (PMS) for UC patients. Endoscopic inflammation was graded using Simple Endoscopic Score of Crohn’s disease (SES-CD) for CD and Ulcerative Colitis Endoscopic Index of Severity (UCEIS) for UC. Concomitant treatment was glucocorticosteroids in 5 patients, mesalazine (n = 2), azathioprine (n = 1) while 3 patients were taking no other drug.
Routine blood laboratory tests were obtained at baseline and at week 10, and included albumin, hemoglobin, high sensitivity CRP, and leukocyte count. Fecal calprotectin was also determined. This study was approved by the Research Ethics Committee at Linköping University (2011/201-31) and at Karolinska University Hospital Stockholm (2012/1900-31/1). The study was approved 20 July 2011 with an amendment to include Karolinska University Hospital 22 May 2013. All patients gave their informed written consent.

Data were analyzed using Statistical Package for the Social Sciences (IBM, SPSS Inc., Chicago, IL, USA), version 20 and GraphPad Prism 6 (GraphPad Software Inc., San Diego, CA, USA). Quantitative variables are presented as mean ± standard-deviation (SD), and qualitative variables are presented as frequencies. Laboratory parameters are presented as median and interquartile range. Chemokines levels are presented as mean + standard error of the mean (SEM). The significance of differences of each parameter before and after treatment was determined by paired Student’s t test or Wilcoxon signed rank test. For the comparisons between responder and non-responder, unpaired Student’s t test or Mann-Whitney test was used according to data normality. For categorical variables, we used Fisher’s exact test. Correlations between chemokines and clinical and laboratory parameters were assessed by Pearson correlation coefficient. Chemokine networks before and after treatment were built using the significant correlation coefficients between them. Network was developed using the nwcommands (available online: http://nwcommands.org). Significance level was determined at p < 0.05. 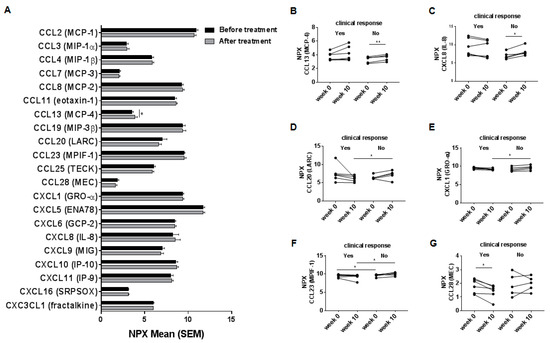 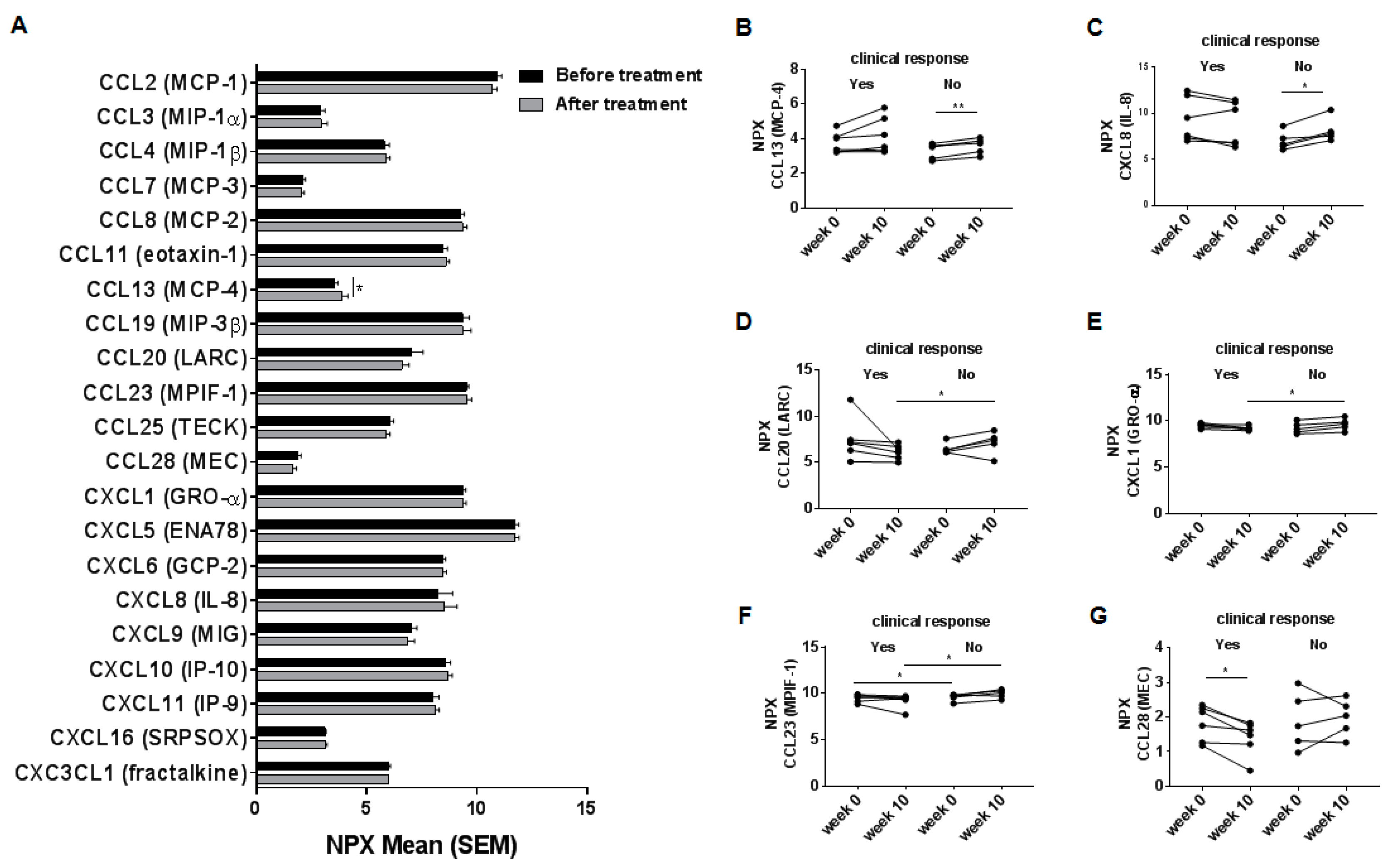