Can We Predict the Efficacy of Anti-TNF-α Agents?
Next Article in Special Issue

Compound 8-C-rhamnosyl apigenin (8CR) induced a moderate reduction in the enzymatic activity of secretory phospholipase A2 (sPLA2) from Crotalus durissus terrificus and cytosolic phospholipase A2 (cPLA2), but the compound also significantly inhibited the enzymatic activity of the enzyme cyclooxygenase. In vitro assays showed that the compound induced a slight change in the secondary structure of sPLA2 from Crotalus durissus terrificus snake venom. In vivo assays were divided into two steps. In the first step, the 8CR compound was administered by intraperitoneal injections 30 min prior to administration of sPLA2. In this condition, 8CR inhibited edema and myonecrosis induced by the sPLA2 activity of Crotalus durissus terrificus in a dose-dependent manner by decreasing interleukin-1β (IL-1β), tumor necrosis factor α (TNF-α), prostaglandin E2 (PGE2), and lipid peroxidation. This has been demonstrated by monitoring the levels of malondialdehyde (MDA) in rat paws after the course of edema induced by sPLA2. These results, for the first time, show that sPLA2 of Crotalus durissus terrificus venom induces massive muscle damage, as well as significant edema by mobilization of cyclooxygenase enzymes. Additionally, its pharmacological activity involves increased lipid peroxidation as well as TNF-α and IL-1β production. Previous administration by the peritoneal route has shown that dose-dependent 8CR significantly decreases the enzymatic activity of cyclooxygenase enzymes. This resulted in a decrease of the amount of bioactive lipids involved in inflammation; it also promoted a significant cellular protection against lipid peroxidation. In vivo experiments performed with 8CR at a concentration adjusted to 200 μg (8 mg/kg) of intraperitoneal injection 15 min after sPLA2 injection significantly reduced sPLA2 edema and the myotoxic effect induced by sPLA2 through the decrease in the enzymatic activity of cPLA2, cyclooxygenase, and a massive reduction of lipid peroxidation. These results clearly show that 8CR is a potent anti-inflammatory that inhibits cyclooxygenase-2 (COX-2), and it may modulate the enzymatic activity of sPLA2 and cPLA2. In addition, it was shown that Crotalus durissus terrificus sPLA2 increases cell oxidative stress during edema and myonecrosis, and the antioxidant properties of the polyphenolic compound may be significant in mitigating the pharmacological effect induced by sPLA2 and other snake venom toxins. View Full-Text
Keywords: Peperomia obtusifolia; Piperaceae; flavonoid; snake venom phospholipase A2; myonecrosis; edema Peperomia obtusifolia; Piperaceae; flavonoid; snake venom phospholipase A2; myonecrosis; edema
►▼ Show Figures 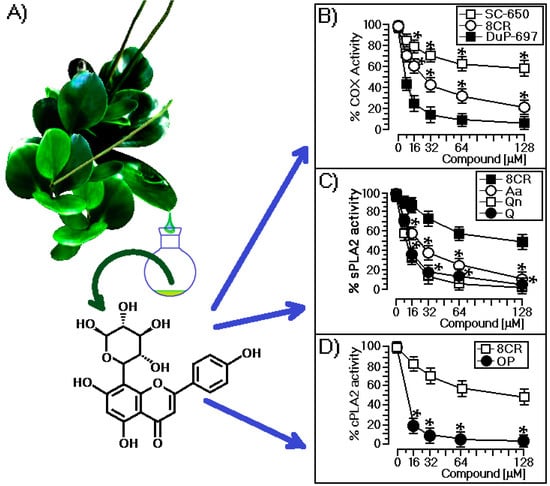