Lactoferrin: A Natural Glycoprotein Involved in Iron and Inflammatory Homeostasis

Premature leaf senescence occurs in the ultimate phase of the plant, and it occurs through a complex series of actions regulated by stress, hormones and genes. In this study, a proteomic analysis was performed to analyze the factors that could induce premature leaf senescence in two cotton cultivars. We successfully identified 443 differential abundant proteins (DAPs) from 7388 high-confidence proteins at four stages between non-premature senescence (NS) and premature senescence (PS), among which 158 proteins were over-accumulated, 238 proteins were down-accumulated at four stages, and 47 proteins displayed overlapped accumulation. All the DAPs were mapped onto 21 different categories on the basis of a Clusters of Orthologous Groups (COG) analysis, and 9 clusters were based on accumulation. Gene Ontology (GO) enrichment results show that processes related to stress responses, including responses to cold temperatures and responses to hormones, are significantly differentially accumulated. More importantly, the enriched proteins were mapped in The Arabidopsis Information Resource (TAIR), showing that 58 proteins play an active role in abiotic stress, hormone signaling and leaf senescence. Among these proteins, 26 cold-responsive proteins (CRPs) are significantly differentially accumulated. The meteorological data showed that the median temperatures declined at approximately 15 days before the onset of aging, suggesting that a decrease in temperature is tightly linked to an onset of cotton leaf senescence. Because accumulations of H2O2 and increased jasmonic acid (JA) were detected during PS, we speculate that two pathways associated with JA and H2O2 are closely related to premature leaf senescence in cotton. View Full-Text
Keywords: premature leaf senescence; iTRAQ; cold-responsive proteins; proteomic; jasmonic acid premature leaf senescence; iTRAQ; cold-responsive proteins; proteomic; jasmonic acid
►▼ Show Figures 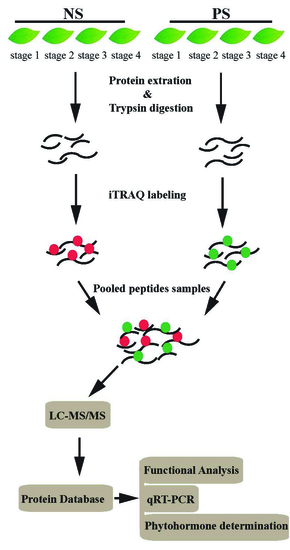