The Consequences of Being in an Infectious Biofilm: Microenvironmental Conditions Governing Antibiotic Tolerance
Previous Article in Journal

Why Ubiquitin Has Not Evolved
Previous Article in Special Issue

Pseudomonas aeruginosa is a major cause of chronic lung infections in cystic fibrosis (CF) patients. The ability of the bacterium to form biofilms and the presence of a thick and stagnant mucus in the airways of CF patients largely contribute to antibiotic therapy failure and demand for new antimicrobial agents able to act in the CF environment. The present study investigated the anti-P. aeruginosa activity of lin-SB056-1, a recently described semi-synthetic antimicrobial peptide, used alone and in combination with the cation chelator ethylenediaminetetraacetic acid (EDTA). Bactericidal assays were carried out in standard culture conditions and in an artificial sputum medium (ASM) closely resembling the CF environment. Peptide’s structure and interaction with large unilamellar vesicles in media with different ionic strengths were also investigated through infrared spectroscopy. Lin-SB056-1 demonstrated fast and strong bactericidal activity against both mucoid and non-mucoid strains of P. aeruginosa in planktonic form and, in combination with EDTA, caused significant reduction of the biomass of P. aeruginosa mature biofilms. In ASM, the peptide/EDTA combination exerted a strong bactericidal effect and inhibited the formation of biofilm-like structures of P. aeruginosa. Overall, the results obtained highlight the potential of the lin-SB056-1/EDTA combination for the treatment of P. aeruginosa lung infections in CF patients. View Full-Text
Keywords: Pseudomonas aeruginosa; cystic fibrosis; antimicrobial peptide; artificial sputum medium; biofilm; infrared spectroscopy Pseudomonas aeruginosa; cystic fibrosis; antimicrobial peptide; artificial sputum medium; biofilm; infrared spectroscopy
►▼ Show Figures 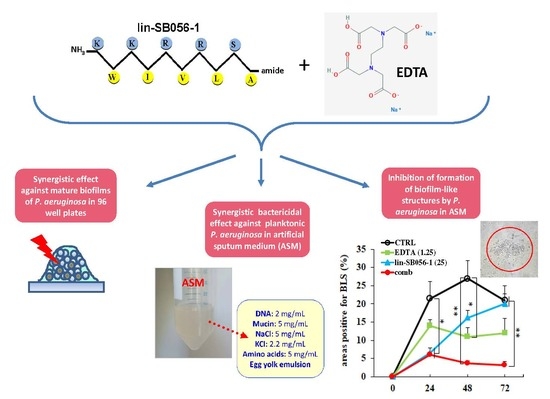