In recent years, a wide range of studies have pointed out the importance of nutraceuticals as reservoirs of therapeutic compounds for several diseases, including cancer. This study is centered on the role of some nutraceuticals as anticancer agents and on their efficiency in the oncological gynecological field. Gynecological cancers include cervical, ovarian, and breast neoplasia and these are the major causes of morbidity and mortality in the female population. Cervical neoplasia affects sexually active women aged between 30 and 40 years and is considered the second leading cause of death for women worldwide. Epidemiological studies have shown a strong association of this cancer with human papilloma virus (HPV) infection, independent of any others risk factors. Ovarian cancer represents about 4% of all women’s cancers and breast neoplasia registers 52.8 new cases per 100,000 women annually. Since ancient times, herbal therapies have shown a wide range of beneficial effects and a high potential for safeguarding human health. Azadirachta indica (Neem) is a medicinal plant of Indian origin, a tree with more of 140 isolated compounds and at least 35 biologically active principles that have shown an important influence as tumor suppressors by interfering with the carcinogenesis process. Used for centuries in Asia as a natural remedy for cancer, neem compounds present in bark, leaves, flowers, and seed oil have been shown to possess properties such as chemopreventive capacity, apoptotic activities, immunomodulatory effects, and induction of p53-independent apoptosis. The current study is a systematic literature review based on the anticarcinogenic potential of neem compounds in gynecological cancers. View Full-Text
Keywords: Azadirachta indica; carcinogenesis; cervical cancer; ovarian cancer; breast cancer Azadirachta indica; carcinogenesis; cervical cancer; ovarian cancer; breast cancer
►▼ Show Figures 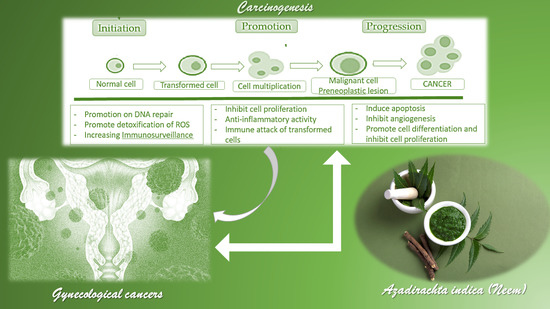