This study aimed to investigate the effect of melatonin on the cell cycle of parthenogenetic embryos derived from vitrified mouse metaphase II (MII) oocytes. Fresh oocytes were randomly allocated into three groups: untreated (control), or vitrified by the open-pulled straw method without (Vitrification group) or with melatonin (MT) supplementation (Vitrification + MT group). After warming, oocytes were parthenogenetically activated and cultured in vitro, then the percentage of embryos in the G1/S phase, the levels of reactive oxygen species (ROS) and glutathione (GSH), and the mRNA expression of cell cycle-related genes (P53, P21 and E2F1) in zygotes and their subsequent developmental potential in vitro were evaluated. The results showed that the vitrification/warming procedures significantly decreased the frequency of the S phase, markedly increased ROS and GSH levels and the expression of P53 and P21 genes, and decreased E2F1 expression in zygotes at the G1 stage and their subsequent development into 2-cell and blastocyst stage embryos. However, when 10−9 mol/L MT was administered for the whole duration of the experiment, the frequency of the S phase in zygotes was significantly increased, while the other indicators were also significantly improved and almost recovered to the normal levels shown in the control. Thus, MT might promote G1-to-S progression via regulation of ROS, GSH and cell cycle-related genes, potentially increasing the parthenogenetic development ability of vitrified–warmed mouse oocytes. View Full-Text
Keywords: melatonin; oocyte vitrification; redox homeostasis; cell cycle; developmental potential; mouse melatonin; oocyte vitrification; redox homeostasis; cell cycle; developmental potential; mouse
►▼ Show Figures 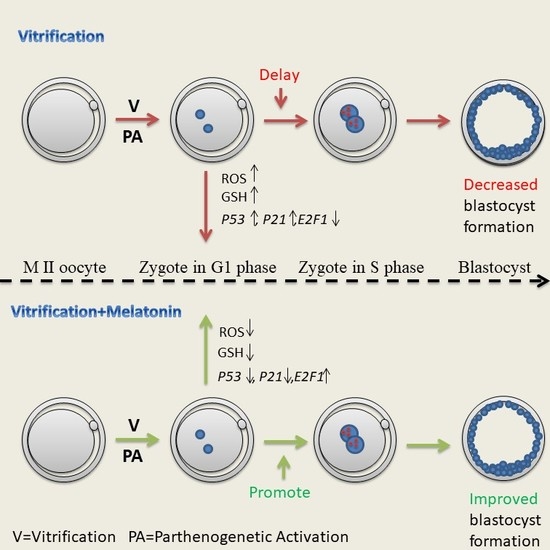