We Are What We Eat: A Stoichiometric and Ecometabolomic Study of Caterpillars Feeding on Two Pine Subspecies of Pinus sylvestris
Previous Article in Journal

The conserved mitogen-activated protein kinase (MAPK) cascades play vital roles in plant defense responses against pathogens and insects. In the current study, the expression profiles of 17 OsMPKs were determined in the TN1 and IR56 rice varieties under the infestation of brown planthopper (BPH), one of the most destructive hemimetabolous rice pests. The virulent IR56 BPH population (IR56-BPH) and the avirulent TN1 BPH population (TN-BPH) were used to reveal the roles of OsMPKs in the compatible (IR56-BPH infested on the TN1 and IR56 rice varieties, and TN1-BPH infested on the TN1 rice variety) and the incompatible (TN1-BPH infested on the IR56 rice variety) interaction. The statistical analysis revealed that rice variety, BPH population type, and infestation period have significant effects on the transcription of OsMPKs. Out of these genes, five OsMPKs (OsMPK1, OsMPK3, OsMPK7, OsMPK14, and OsMPK16) were found to exhibit upregulated expression only during incompatible interaction. Six OsMPKs (OsMPK4, OsMPK5, OsMPK8, OsMPK9, OsMPK12, and OsMPK13) were associated with both incompatible and compatible interactions. The transcription analysis of salicylic acid, jasmonic acid, and ethylene phytohormone signaling genes revealed their roles during the rice–BPH interactions. The upregulated expression of OsC4H, OsCHS, and OsCHI in the incompatible interaction implied the potential defense regulatory roles of phenylpropanoids. In both varieties, the elevated transcript accumulations of OsGST and OsSOD, and the increased enzyme activities of POD, SOD, and GST at 1 day post-infestation (dpi), but not at 3 dpi, indicated that reactive oxygen species (ROS) signaling might be an early event in rice–BPH interactions. Furthermore, upregulated transcription of OsLecRK3 and OsLecRK4 was found only during an incompatible interaction, suggesting their involvement in the BPH resistance response in the IR56 rice variety. Lastly, based on the findings of this study, we have proposed a model of interactions of IR56 rice with TN1-BPH and IR56-BPH that depicts the resistance and susceptibility reactions, respectively. View Full-Text
Keywords: Nilaparvata lugens; MAPKs; rice–BPH interaction; IR56 rice; phytohormones Nilaparvata lugens; MAPKs; rice–BPH interaction; IR56 rice; phytohormones
►▼ Show Figures 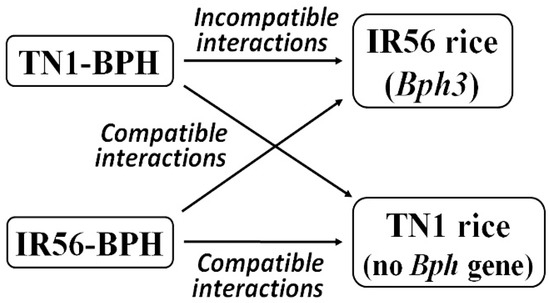