A comparative study of the effects of exposure to high Cd2+ (50 µM) and excess Zn2+ (600 µM) on photosynthetic performance of hydroponically-grown durum wheat seedlings was performed. At day 8, Cd and Zn were added to the nutrient solution. After 7-days exposure, the chosen concentrations of both metals resulted in similar relative growth rate (RGR) inhibitions of about 50% and comparable retardations of the CO2 assimilation rates (about 30%) in the second developed leaf of wheat seedlings. Analysis of chlorophyll a fluorescence indicated that both metals disturbed photosynthetic electron transport processes which led to a 4- to 5-fold suppression of the efficiency of energy transformation in Photosystem II. Non-specific toxic effects of Cd and Zn, which prevailed, were an inactivation of part of Photosystem II reaction centres and their transformation into excitation quenching forms as well as disturbed electron transport in the oxygen-evolving complex. The specificity of the Cd and Zn modes of action was mainly expressed in the intensity of the toxicity effects: despite the similar inhibitions of the CO2 assimilation rates, the wheat photochemistry showed much more sensitivity to Cd than to Zn exposure. View Full-Text
Keywords: photosynthesis; chlorophyll fluorescence; cadmium; zinc photosynthesis; chlorophyll fluorescence; cadmium; zinc
►▼ Show Figures 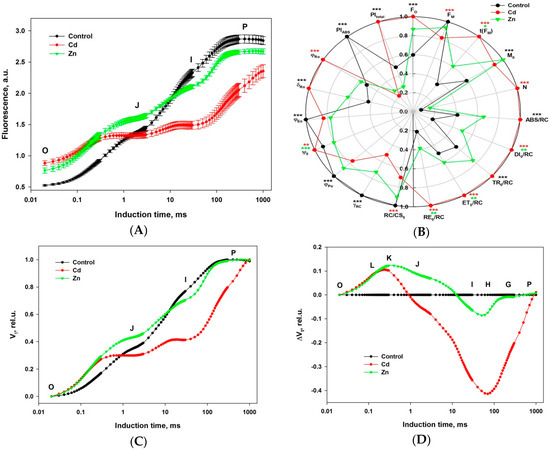