Listeria monocytogenes (L. monocytogenes) is the causative agent of the systemic infections called listeriosis [1]. These are a foodborne infections caused by food contamination by bacteria [2]. Listeriosis affects newborns, pregnant women, older adults, and adults with weakened immune systems [3]. L. monocytogenes can cross the intestinal, blood-brain, and feto-placental barriers, leading to gastroenteritis, meningoencephalitis, and maternofetal infections [4]. L. monocytogenes has been used as a model organism to study host-pathogen interactions [5].
MicroRNAs (miRNAs) are endogenous, small non-coding RNAs that regulate most important cellular processes by regulating target gene expression at the post-transcriptional level by targeting mRNAs for translational repression or degradation [6]. MiRNAs have emerged as key regulators of host immune responses [7]. Recent studies have shown that miRNAs play important roles in the defense against bacterial infections [8,9,10]. Regulation of miRNA expression has become increasingly recognized as a novel molecular strategy exploited by intracellular bacterial pathogens to manipulate host cellular pathways to survive in host cells [11]. Previous studies have revealed that microRNA-146a (miR-146a) is involved in inflammation and bacterial infections. MiR-146a negative regulates LPS-activated TLR and NFκB signaling pathway by targeting TRAF6 and IRAK1 [12,13]. Following Helicobacter pylori infection, the increased miR-146a inhibits bacteria-induced inflammation by targeting IRAK1 and TRAF6 [14]. MiR-146a also promotes mycobacterial survival by repressing NO production via targeting TRAF6 [15]. These data suggest that miR-146a plays an important role in health and disease [16], but it remains elusive whether miR-146a can regulate infection with L. monocytogenes.
The gut microbiota has a major impact on a range of metabolism, nutrition, nervous, endocrine, and immune functions [17,18,19,20,21]. It plays a critical protective role in host defense against infection, both by mediating colonization resistance and by modulating potent innate immune responses [18]. Changes in the gut microbiota can promote or confer resistance to bacterial infection. The gut microbiota is regulated by multiple factors, including diet, disease states, host genetics, age, and environmental factors [22]. Since miRNAs play important roles in defense against bacterial infections, it is important to understand the interaction between gut bacteria and miRNAs. However, it remains unclear whether miRNA can regulate the gut microbiota.
In this study, we describe our new discovery about the regulatory role of miR-146a during L. monocytogenes infection. We aimed to determine whether miR-146a controls L. monocytogenes infection by regulating the gut microbiota.

2.1. MiR-146a Expression Is Induced by L. monocytogenes Infection both In Vitro and In Vivo

To characterize the role of miR-146a during L. monocytogenes infection, wild-type (WT) and miR-146a knockout (miR-146a KO) mice were infected intraperitoneally (i.p.) with a lethal dose of 106 CFU of L. monocytogenes. Whereas, all of WT mice succumbed to infection within 5–6 days, 90.00% of miR-146a KO mice survived the infection and were still alive at day 14 post-infection (Figure 2A). WT mice lost, on average, 24.61% of their initial body weight before succumbing to infection, whereas weight loss in miR-146a KO mice was initially limited (<8% by day 3), and body weight gradually returned to normal after day 4 (Figure 2B).
L. monocytogenes infection triggers histopathological lesions and the formation of inflammatory cell foci, the size of which correlates with disease severity [23]. To examine the extent of immune cell infiltration, hematoxylin and eosin (H&E)-stained liver sections of L. monocytogenes-infected WT and miR-146a KO mice were compared. In agreement with our results above, the inflammatory cell foci in miR-146a KO livers were significantly smaller than those found in WT mice at day 3 post-infection (Figure 2C). These results indicate that miR-146a plays an important role in host defense against L. monocytogenes infection.

MicroRNA-146a knockout (miR-146a KO) and wild-type (WT) C57BL/6J mice were purchased from The Jackson Laboratory (Bar Harbor, ME, USA). All mice were 6–8 weeks old at the time of experimentation. The mice were maintained on a 12-h dark-light cycle and allowed for free access to food and tap water under controlled temperatures. For co-housing experiments, equal numbers of female WT and miR-146a KO mice were housed in the same cage for four weeks [38]. All of the animal studies were conducted according to the Institutional Animal Care and Use Committee of Jilin University (approved on 30 September 2016, Protocol No. 20160930).

RAW264.7 cells were cultured in Dulbecco’s modified Eagle’s medium (DMEM) (Gibco, Thermo Fisher Scientific, Waltham, MA, USA) without antibiotics at 37 °C under a 5% CO2 atmosphere. BMDMs were prepared and cultured as previously described [39]. Briefly, BMDMs were isolated from the femurs and tibias of 8- to 10-week-old mice and were cultured in RPMI-1640 medium containing 10% heat-inactivated FBS and 25% L929 conditioned medium. The cells were harvested for assays after seven days of differentiation.

L. monocytogenes 10403S was a gift from Wei-Huan Fang (Microbiology Institute of Preventive Veterinary Medicine, Zhejiang University, Hangzhou, China). Lethal L. monocytogenes infection was established by infecting 6–8-week-old female mice with 1 × 106 CFU bacteria administered intraperitoneally (i.p.). Animals were weighed and monitored daily for mortality for up to 14 days. Differences in survival were analyzed by Mantel-Cox test. To study bacterial clearance, mice were infected with L. monocytogenes at a dose of 1 × 106 CFU (i.p.). Mice were sacrificed at days 1 and 3 post-infection, liver and spleen tissue were homogenized, and bacterial burdens were enumerated by serial dilution on Brain-Heart-Infusion agar or plates, as described previously [40]. Mice were sacrificed at day 3 post-infection, and different organs (liver, spleen, kidney, and lung) were collected for RNA isolation.

Total RNA was extracted from cells and tissue samples using the TRIzol® Reagent (Invitrogen, Carlsbad, CA, USA) according to the manufacturer’s protocol. MiR-146a was quantified by RT-PCR using specific Taqman assays for miRNA (Applied Biosystems, Foster City, CA, USA) and specific primers for miR-146a (Applied Biosystems, primer identification numbers: 000468 for mmu-miR-146a and 001973 for snRU6). MiR-146a was quantified with the 2−ΔΔCt relative quantification method with normalization to the U6 small nucleolar RNA (snRU6).

Cell death was evaluated by detection of the cytoplasmic enzyme LDH. The LDH assay was performed by using a Promega cytotoxicity kit (Promega, Madison, WI, USA), according to the manufacturer’s instructions.

Formalin-preserved liver and spleen sections were processed and embedded in paraffin by standard techniques. Longitudinal sections that were 5 μm thick were stained with hematoxylin and eosin (H&E) and were examined by a pathologist that was blinded to the experimental groups.

Mouse feces were sampled from WT mice (n = 8) and miR-146a KO mice (n = 8). All of the mice were transferred to fresh sterilized cages and the feces were collected from the cages within two hours. All of the samples were immediately frozen and stored at −80 °C until further treatment.

DNA from the stool samples was pooled and purified using the QIAamp DNA Stool Mini Kit (Qiagen, Valencia, CA, USA) according to the manufacturer’s instructions. Quantification was performed with a NanoDrop ND-2000 UV-Vis spectrophotometer (NanoDrop Technologies, Wilmington, DE, USA). Sixteen libraries were constructed and sequenced using the Illumina MiSeq sequencing platform. The V4 regions of the 16S rRNA gene comprising were amplified by PCR using specific bacterial primers (Table S2). High-throughput sequencing was performed using the Illumina MiSeq platform, following the manufacturer’s instructions at Novogene Bioinformatics Technology Co., Ltd. (Beijing, China). Sequences were processed using the QIIMEpipeline (version 1.8.0, available online: http://qiime.org). The quality-filtered reads were clustered into operational taxonomic units (OTUs) at a 97% identity level. Taxonomies were assigned with the UCLUST algorithm against the GreenGenes database (gg_otus_13_8). Alpha diversity was calculated using the observed species metrics. To calculate the beta diversity (weighted UniFrac distance), 8000 sequences were randomly selected from each sample. Statistical significance of the factors that were potentially contributing to compositional differences between the samples was examined using Adonis, ANOSIM, and MRPP, which were performed using QIIME 1.8.0. LEfSe was used for detecting the differences in the abundance of bacterial species between groups.
The raw reads were deposited into the NCBI Sequence Read Archive (SRA) database (accession number: SRP093952).

DNA was isolated from stools (200 mg/mouse) from each mouse using TIANGEN DNA Stool Mini Kit. The abundance of bacterial populations in mouse stools was measured by qPCR using the ABI 7500 Sequence Detection System. The PCR mix was made with SYBR Green Master Mix (Roche, Mannheim, Germany). The thermo cycling program was 3 min at 95 °C and 40 cycles of 15 sec at 95 °C and 1 min at 60 °C. The following specific forward and reverse primers, respectively, were used: Proteobacteria (5′-TCGTCAGCTCGTGTYGTGA-3′ and 5′-CGTAAGGGCCATGATG-3′) [41], Prevotellaceae (5′-CGGAAGGTCCGGGCGTTATCCG-3′ and 5′-CCTGTTCGATACCCGCGCCTTC-3′) [42], Alistipes (5′-GTACTAATTCCCCATAACATTCGAG-3′ and 5′-CTAATACAACGCATGCCCATCTT-3′) [43], and the universal 16S rRNA gene EUB primers (5′-AGAGTTTGATCCTGGCTC-3′ and 5′-TGCTGCCTCCCGTAGGAGT-3′) [42]. The relative abundance of each bacterial population was quantified with the 2−ΔΔCt relative quantification method with normalization to the universal 16S rRNA gene EUB.

All of the results were obtained from three independent experiments. The results are shown as the means ± SEM. Differences between mean values were determined with student’s t-test. p < 0.05 was considered statistically significant. Statistics were performed with Prism software (GraphPad, La Jolla, CA, USA). 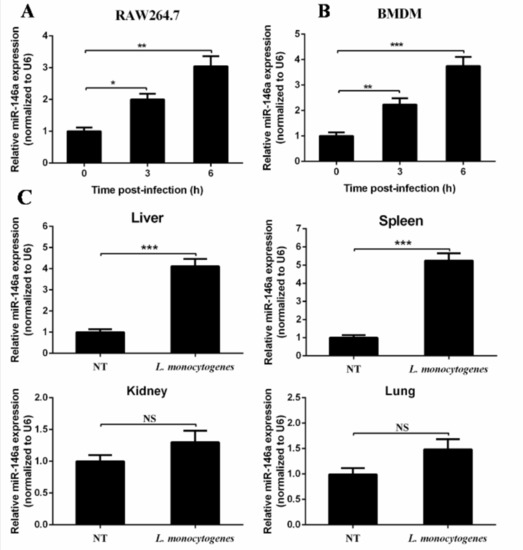 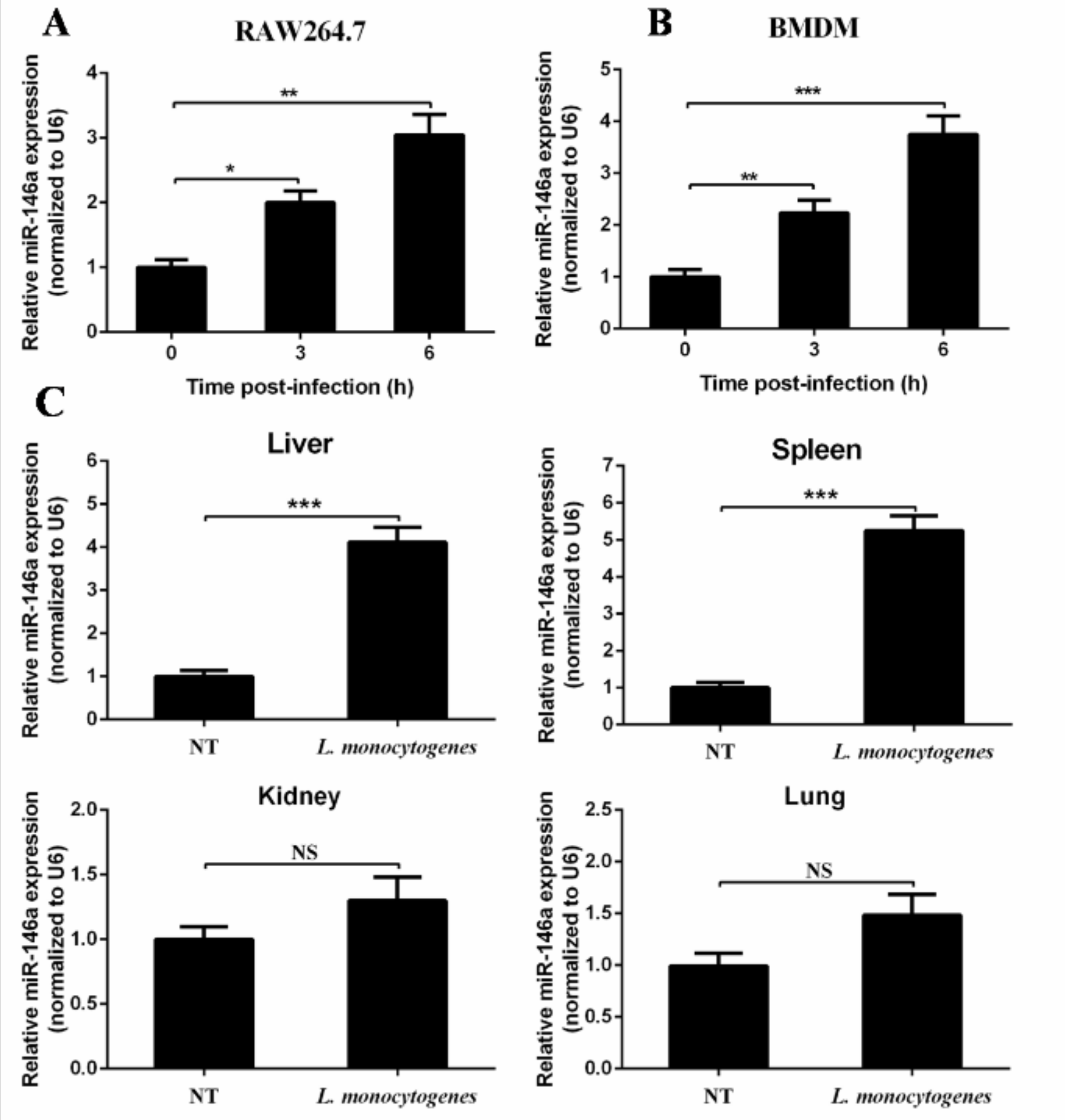 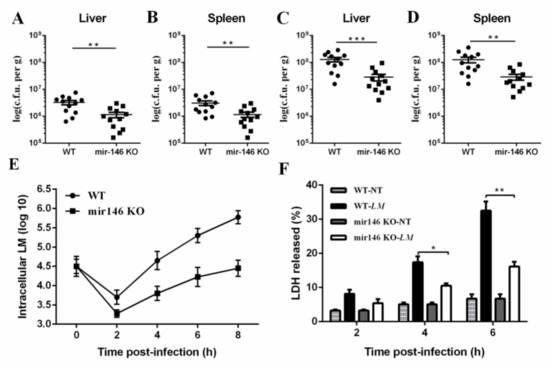 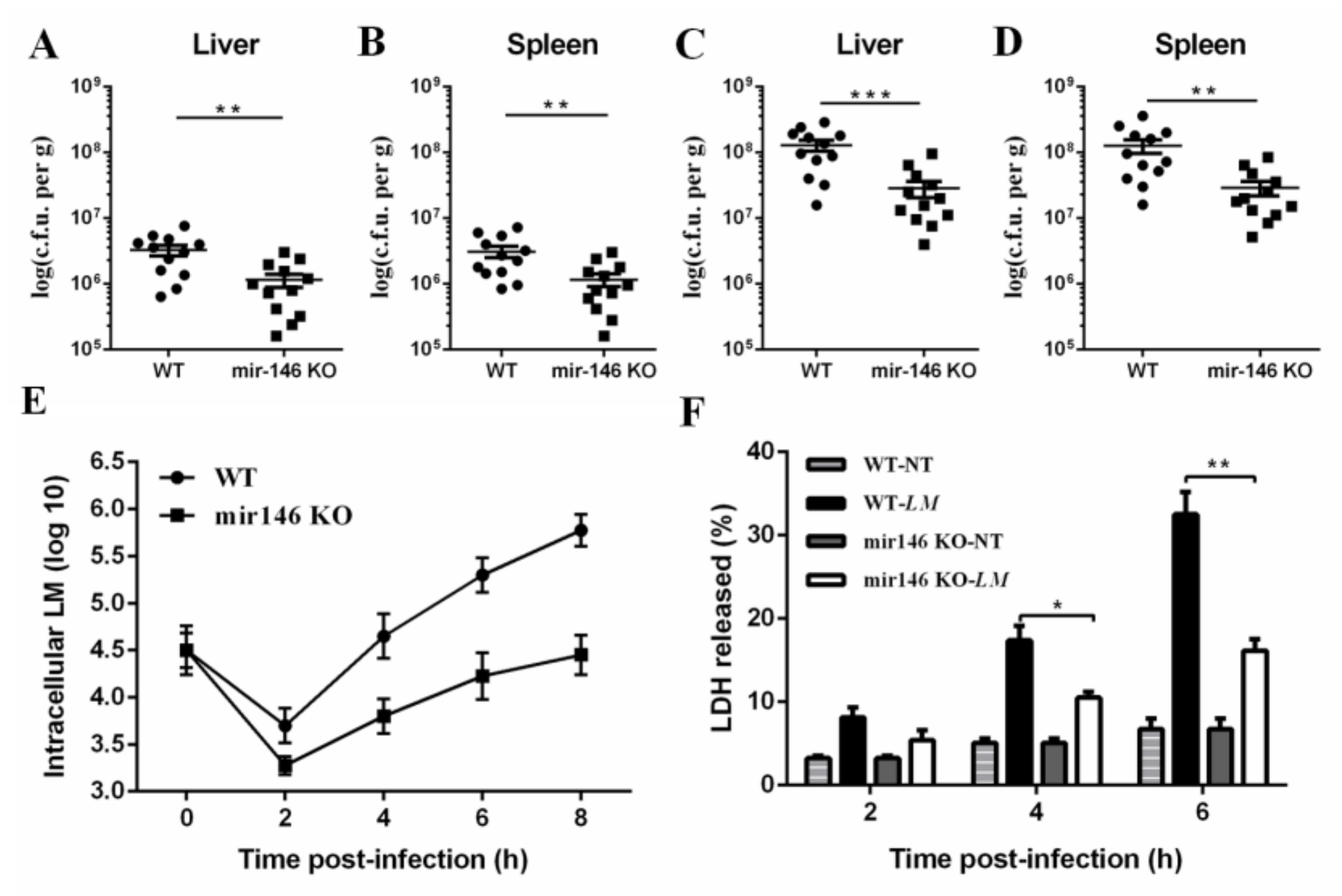 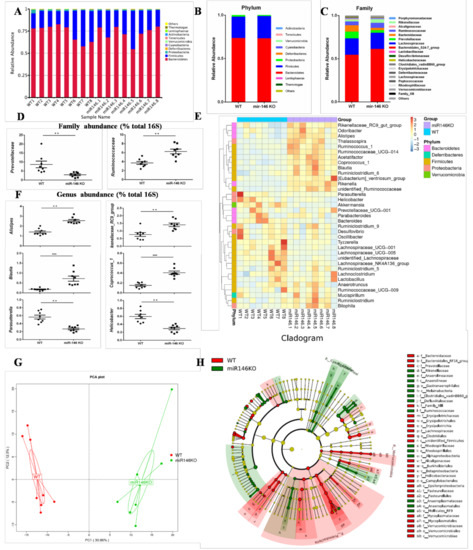 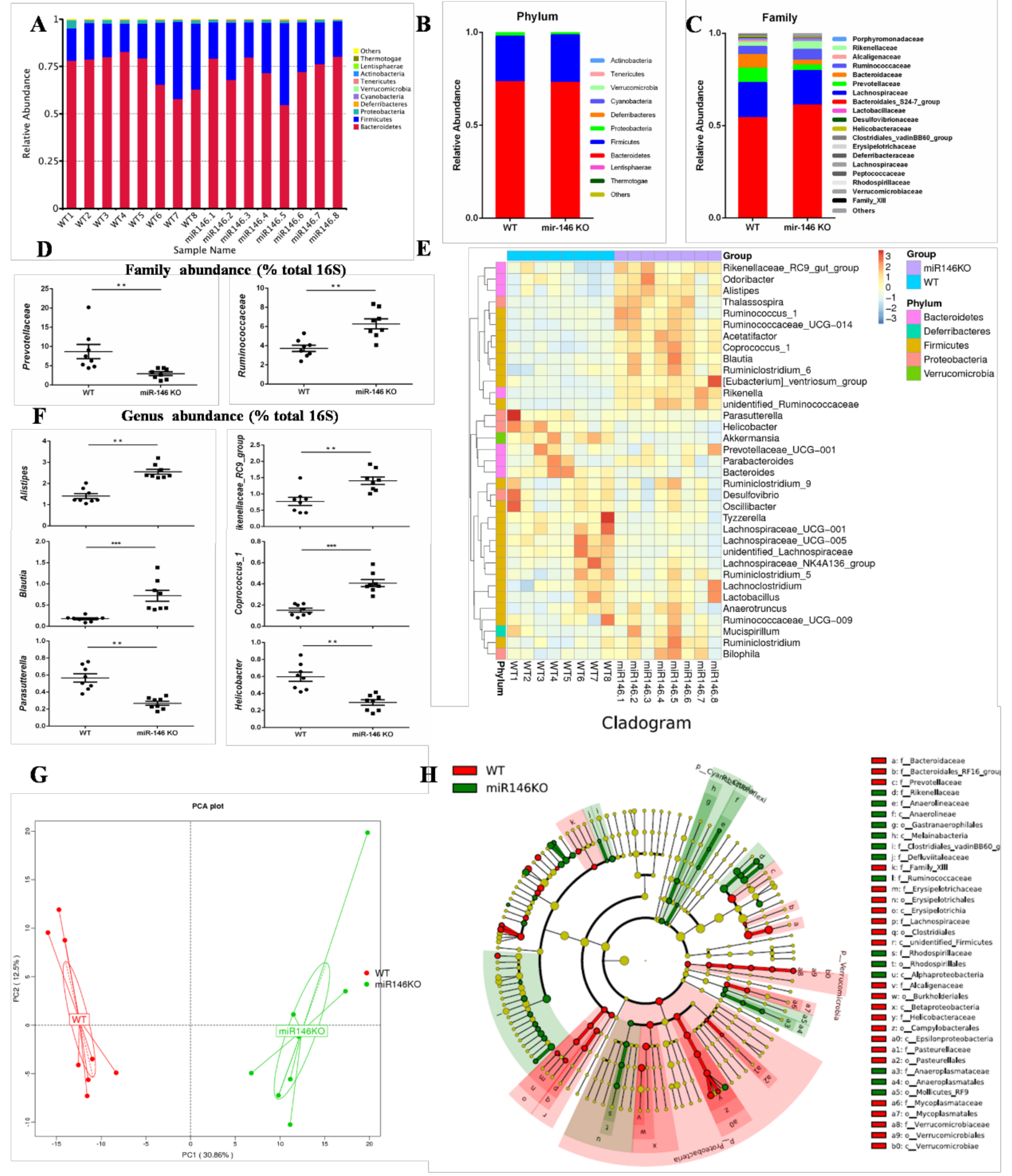 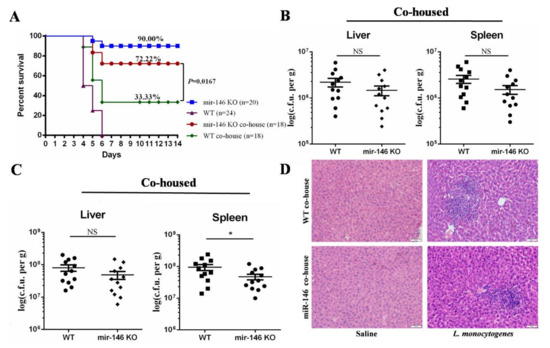 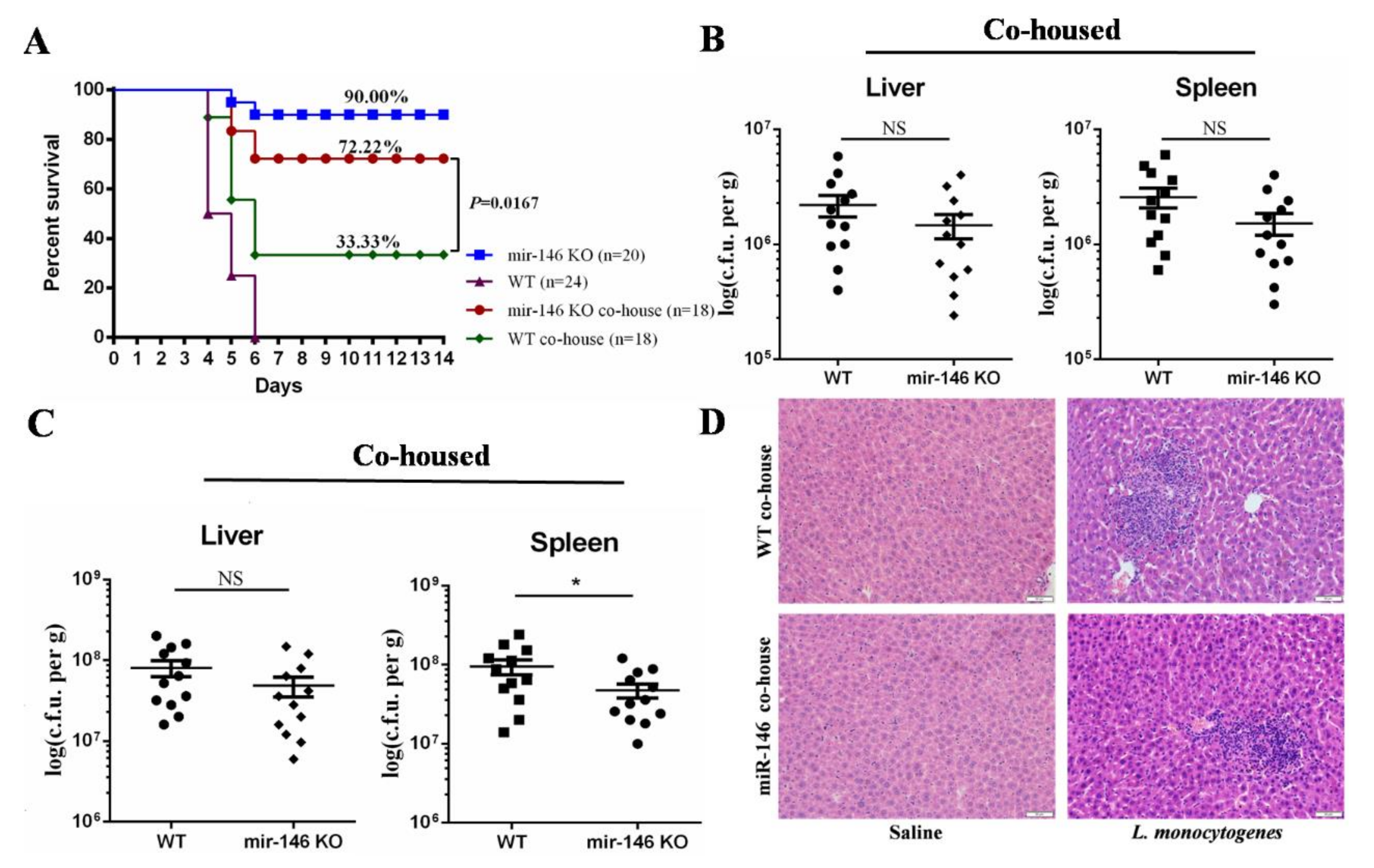