Oxygen-Induced Retinopathy from Recurrent Intermittent Hypoxia Is Not Dependent on Resolution with Room Air or Oxygen, in Neonatal Rats

The Janus Face of VEGF in Stroke

The family of vascular endothelial growth factors (VEGFs) are known for their regulation of vascularization. In the brain, VEGFs are important regulators of angiogenesis, neuroprotection and neurogenesis. Dysregulation of VEGFs is involved in a large number of neurodegenerative diseases and acute neurological insults, including stroke. Stroke is the main cause of acquired disabilities, and normally results from an occlusion of a cerebral artery or a hemorrhage, both leading to focal ischemia. Neurons in the ischemic core rapidly undergo necrosis. Cells in the penumbra are exposed to ischemia, but may be rescued if adequate perfusion is restored in time. The neuroprotective and angiogenic effects of VEGFs would theoretically make VEGFs ideal candidates for drug therapy in stroke. However, contradictory to what one might expect, endogenously upregulated levels of VEGF as well as the administration of exogenous VEGF is detrimental in acute stroke. This is probably due to VEGF-mediated blood–brain-barrier breakdown and vascular leakage, leading to edema and increased intracranial pressure as well as neuroinflammation. The key to understanding this Janus face of VEGF function in stroke may lie in the timing; the harmful effect of VEGFs on vessel integrity is transient, as both VEGF preconditioning and increased VEGF after the acute phase has a neuroprotective effect. The present review discusses the multifaceted action of VEGFs in stroke prevention and therapy. View Full-Text
Keywords: growth factor; VEGF; stroke; ischemia; exercise growth factor; VEGF; stroke; ischemia; exercise
►▼ Show Figures 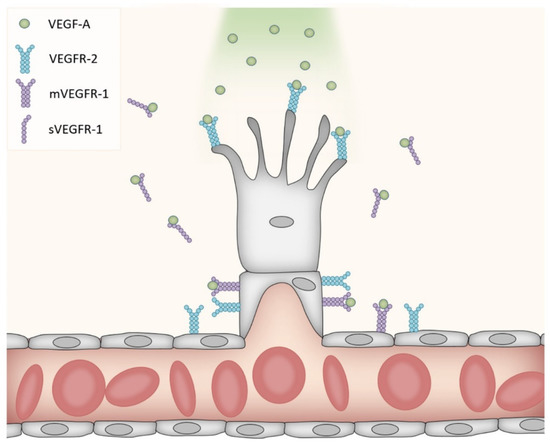