ALUminating the Path of Atherosclerosis Progression: Chaos Theory Suggests a Role for Alu Repeats in the Development of Atherosclerotic Vascular Disease

Atherosclerosis (ATH) and coronary artery disease (CAD) are chronic inflammatory diseases with an important genetic background; they derive from the cumulative effect of multiple common risk alleles, most of which are located in genomic noncoding regions. These complex diseases behave as nonlinear dynamical systems that show a high dependence on their initial conditions; thus, long-term predictions of disease progression are unreliable. One likely possibility is that the nonlinear nature of ATH could be dependent on nonlinear correlations in the structure of the human genome. In this review, we show how chaos theory analysis has highlighted genomic regions that have shared specific structural constraints, which could have a role in ATH progression. These regions were shown to be enriched with repetitive sequences of the Alu family, genomic parasites that have colonized the human genome, which show a particular secondary structure and are involved in the regulation of gene expression. Here, we show the impact of Alu elements on the mechanisms that regulate gene expression, especially highlighting the molecular mechanisms via which the Alu elements alter the inflammatory response. We devote special attention to their relationship with the long noncoding RNA (lncRNA); antisense noncoding RNA in the INK4 locus (ANRIL), a risk factor for ATH; their role as microRNA (miRNA) sponges; and their ability to interfere with the regulatory circuitry of the (nuclear factor kappa B) NF-κB response. We aim to characterize ATH as a nonlinear dynamic system, in which small initial alterations in the expression of a number of repetitive elements are somehow amplified to reach phenotypic significance. View Full-Text
Keywords: atherosclerosis; Alu repeats; noncoding RNAs; miRNA; miRNA sponge; ANRIL; chaos theory; Chaos Game Representation; long-range correlations; NF-κB atherosclerosis; Alu repeats; noncoding RNAs; miRNA; miRNA sponge; ANRIL; chaos theory; Chaos Game Representation; long-range correlations; NF-κB
►▼ Show Figures 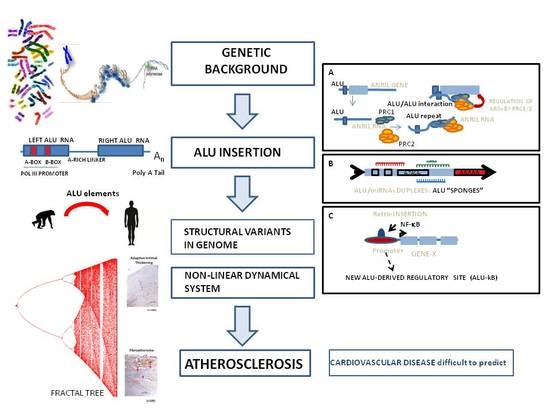