Crosstalk between Notch, HIF-1α and GPER in Breast Cancer EMT
Next Article in Special Issue

We comprehensively investigated the biodiversity of fungal communities in different developmental stages of Trypophloeus klimeschi and the difference between sexes and two generations by high throughput sequencing. The predominant species found in the intestinal fungal communities mainly belong to the phyla Ascomycota and Basidiomycota. Fungal community structure varies with life stage. The genera Nakazawaea, Trichothecium, Aspergillus, Didymella, Villophora, and Auricularia are most prevalent in the larvae samples. Adults harbored high proportions of Graphium. The fungal community structures found in different sexes are similar. Fusarium is the most abundant genus and conserved in all development stages. Gut fungal communities showed notable variation in relative abundance during the overwintering stage. Fusarium and Nectriaceae were significantly increased in overwintering mature larvae. The data indicates that Fusarium might play important roles in the survival of T. klimeschi especially in the overwintering stage. The authors speculated that Graphium plays an important role in the invasion and colonization of T. klimeschi. The study will contribute to the understanding of the biological role of the intestinal fungi in T. klimeschi, which might provide an opportunity and theoretical basis to promote integrated pest management (IPM) of T. klimeschi. View Full-Text
Keywords: Trypophloeus klimeschi; life stages; intestinal fungal; fungal communities; integrated pest management Trypophloeus klimeschi; life stages; intestinal fungal; fungal communities; integrated pest management
►▼ Show Figures 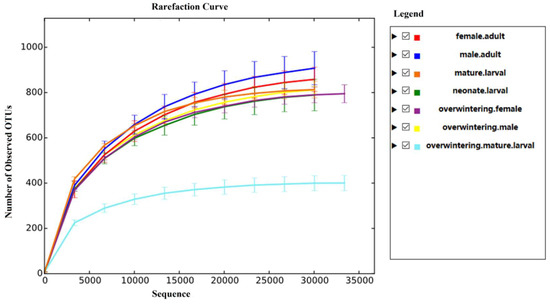