STAT3, a Hub Protein of Cellular Signaling Pathways, Is Triggered by β-Hexaclorocyclohexane
Next Article in Special Issue

Aeromonas (Aeromonadaceae) species are ubiquitous and can cause infections not only in humans but also in fish. Aeromonas are isolated from various sources, such as fresh, estuarine, or surface waters, sewage, food products, healthy or diseased fish, or animal and human feces and are ubiquitous in aquatic ecosystems [1,2,3,4,5]. Aeromonas diseases in fish are mainly caused by the release of two important virulence factors, namely extracellular hemolysin and aerolysin [6,7,8]. At ambient temperature, Aeromonas species are known as active spoilers of fish and meat [9,10]. They are opportunistic pathogens of fish and can cause outbreak during stress conditions, such as poor water quality, overcrowding, and rough handling [1,11,12].
Aeromonas spp. are gram-negative, straight, nonspore-forming rods, generally cytochrome oxidase positive, facultatively anaerobic, and chemoorganotrophic and are characterized by their ability to grow in 0% NaCl but not in 6% NaCl [1]. Aeromonas septicemia causes fatal infectious disease in cold-blooded animals [13]; in humans [14,15,16], disease is often caused by the motile Aeromonas, particularly Aeromonas hydrophila, Aeromonas sobria (A. sobria), and Aeromonas caviae.
In this study, we concentrated on A. sobria, which causes septicaemia in cultured marine and freshwater fish in Taiwan. A. sobria infections frequently result in considerable economic loss to fish farmers in Taiwan. There are several studies of transcriptome profile in fish upon exposure to different pathogens, such as Aeromonas hydrophila infection in zebrafish (Danio rerio), grass carp (Ctenopharyngodon idella), darkbarbel cat fish (Pelteobagrus vachellii) [17,18,19] and Vibrio anguillarum infection in soles (Cynoglossus semilaevis) [20], indicating the activation of specific immune pathways after bacterial infection. Other examples include orange-spotted grouper (Epinephelus coioides) [21], the blunt snout bream (Megalobrama amblycephala) [22], the Chilean abalone Concholepas (Gastropoda, Muricidae) [23], grass carp (Ctenopharyngodon idella) [24], blowfish or fugu (Takifugu rubripes) [25], large yellow croaker (Larimichthys crocea) [26], and Nile tilapia (Oreochromis niloticus) [27,28], demonstrating that the pathways and immune gene expression are dependent on individual host and pathogen. In addition, other studies reported on response to immune stimuli, pathogenic infection, or environmental stress [29,30,31]. However, to the best of our knowledge, there is no information available on the differential gene expression profile for the entire fish transcriptome in response to A. sobria challenge and infection in koi carp.

To validate the DEGs identified by RNA-Seq analysis, we performed RT-qPCR. Seven genes (C3, IL1β, IL8, MyD88, NF-κB, TLR5, TNFα) associated with the complement system, antigen processing, and toll-like receptors were detected in the spleen and muscle by RT-qPCR (Table 4). In the spleen of the infected fish, at 1 dpi, the expression levels of IL1β, IL8, and MyD88 were significantly up-regulated. In the muscle at 1 dpi, the expression levels of C3, IL1β, and IL-8 showed an upward trend, but these was not significant.

This study used the spleen and muscle of koi carp at 24 h after infection with A. sobria as experimental samples to determine immune-related genes and signaling pathways activated during the early stage of infection. As expected, the results showed that many immune-related genes in the koi carp were up-regulated significantly after A. sobria infection. The most significantly up-regulated genes associated with immunity were the pro-inflammatory cytokine-related and the signal transduction related genes, such as IL-1β, TNF receptor, CXC chemokine, TGF-β, NF-κB, and some other immune-related genes; pathogen recognition related genes were also significantly up-regulated.
After assembly, 69,480 unigenes were generated, with an average length of 578 bp, which was longer than those achieved in previous studies, using the Roche GS FLX 454 system with MIRA assembler (a length range of 118–2065 bp and an average length of 495 bp) [32] or Illumina/Hiseq-2000 with the assembling program-SOAP (a length range of 200–5245 bp and an average length of 412 bp) [33]. This difference in sequence quality is possibly owing to the difference in sampling tissue and the different de novo assemblers. Trinity assemblies, which were used in this study, have a consistently better performance than the other tools used in transcriptome assembling, even in the absence of a reference genome [34,35]. In contrast to Trinity, the SOAP or MIRA assemblies adopted in previous reports [32,33] were more fragmented under high values of sequencing errors and polymorphism levels [34]. Additionally, compared with the merged 69,480 unigenes in this transcriptome, previous studies provided relatively smaller gene sets (29,682 unigenes from Roche 454 system and 2139 unigenes from a SMART cDNA library) [36], and this result further emphasizes that Illumina/Hiseq-2000 RNA-Seq is a more ideal method for transcriptome analysis and it has high efficiency and massive data output.
In this study, only 60,593 unigenes were annotated with at least one database and the same problem has also been reported for the transcriptomes of other groups of marine organisms [37]. The possible reason for less annotation may be due to the availability of limited genome sequence database and research on aquaculture fish species [38,39,40]. Nonetheless, the functional annotations of unigenes according to GO, COG, and KEGG databases provided ample numbers of candidate genes and valuable information about biological features of koi carp challenged with A. sobria in this study. For example, as per the KEGG analysis, 33,057 sequences were assigned to 244 KEGG pathways, and among them, genetic information processing accounted for the largest number of pathways related to pathogen infection (Figure 2 and Figure 3).
In the present study, identification of SSR might be useful in genetic, evolutionary, and breeding studies [41] in koi carp studies. These data on SRR will be useful in future studies on gene expression, which can be manipulated by SRR variations in the 5 UTR regions as they affect the transcription and translation. As it is evident that SRR are ubiquitous in transcriptomes and specific, this unigene could be used for molecular marker development, comparative genetic mapping and genotyping.

Prior to the conduct of experiments, all the fish were kept in a recirculatory system for 2 weeks and allowed them to acclimatize to the laboratory conditions. Throughout the experiment, fish were handled with 2-phenoxyethanol as an anesthetic. Approval for animal studies was obtained from the Center for Research Animal Care and Use Committee of the National Pingtung University of Science and Technology under protocol no #101-027 dated 19 March 2012.

The bacterium A. sobria was isolated from diseased koi carp with severe skin ulcer. The species was identified by API 20NE and 16S rDNA sequencing, cultured in brain heart infusion (BHI) broth for 18 h at 25 °C and enumerated prior to the challenge test.
A total of 15 fish (body weight 325 ± 23 g) were anaesthetized and used for intraperitoneal injection with 1 × 107 cfu per fish. Individual fish received 1 × 107 cfu in 200 μL phosphate buffered saline (PBS, pH 7.2). The other tank with 15 fish was injected with 200 µL of PBS (pH 7.2) only and used as a control. Three fish each from the challenge (treatment) and control groups (n = 3), respectively, were examined at post 24 h infection. Muscle and spleen tissues were dissected hygienically and total RNA was isolated.

Adaptors and unknown bases (N) and low-quality reads were filtered using internal software and stored in FASTQ format [42]. Using the default parameter in Trinity (https://github.com/trinityrnaseq/trinityrnaseq/wiki) assembly was performed for paired reads and clustered to unigenes via TIGR gene indices.

NCBI Nr (http://0-www.ncbi.nlm.nih.gov.brum.beds.ac.uk/), the COG (http://0-www.ncbi.nlm.nih.gov.brum.beds.ac.uk/COG/), and the KEGG (http://www.genome.jp/kegg/), BlastP (Version 2.2.25) for unigenes containing open reading frames (ORFs), and BlastX for unigenes without an ORF [43] were used for annotation. The Blast2GO program was used to obtain GO annotation of the unigenes based on BLASTx hits against the NCBI Nr database [44] and aligned, and the non-aligned unigenes were predicted by ESTscan [45].

4.7. Identification of SSRs and SNP

SSRs were identified using MISA software package [46] (http://pgrc.ipk-gatersleben.de/misa) and di-, tri-, tetra-, penta-, and hexa-nucleotide motifs with a minimum of 8, 5, 5, 5, and 5 repeats were also identified with default parameters, respectively. SNPs were identified in the unigene of koi carp using HISAT [47] (http://0-ccb.jhu.edu.brum.beds.ac.uk/software/hisat/index.shtml), and then were called using GATK [48].

Bowtie2 software (http://bowtie-bio.sourceforge.net) [49] was used to determine the expression form treatment and control library. In order to obtain the DEGs in muscle and spleen tissues between the control and the infected groups, fragments per kilobase of transcripts per million fragments mapped (FPKM) values were analyzed further using the RESM [50] and the false discovery rate (FDR) was used when it is <0.05.

Once the infected fish were prepared, we performed another set of experiments for the validation of RNA-Seq data. DNase I-treated total RNA from the spleen and muscle was subjected to cDNA synthesis using iScript™ cDNA synthesis kits (Bio-Rad, Hercules, CA, USA). Reverse transcriptase real-time PCR (RT-qPCR) was performed using iQ™ SYBR® Green Supermix (Bio-Rad). The list of primer sequences is shown in Table 5. Gene expression levels were normalized to that of EF1α. To enable comparisons between the two groups, statistical analysis was performed using Student’s t-test. Values of p < 0.05 were considered statistically significant.

This is the first study to provide information on host defense gene activities based on differential transcriptomic profiling in koi carp against A. sobria. The large number of differential expression of immune-related genes from innate immunity, antigen processing and complement cascade in this study indicated the activation of koi carp host immune response towards A. sorbria infection and its effect. However, further studies should be directed towards understanding of these different expressed immune genes as potential functional markers in koi carp against A. sobria infection. Understanding the protein levels of these functional markers in the infected koi carp would be of vital importance, as such approach may lead to a profound understanding of the regulation and responses that occur during the infection, and thus lead to the development of very specific and efficient novel vaccines and chemotherapies. 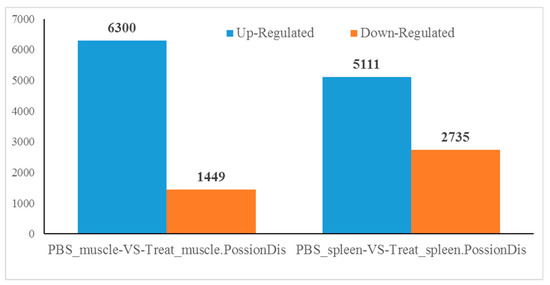 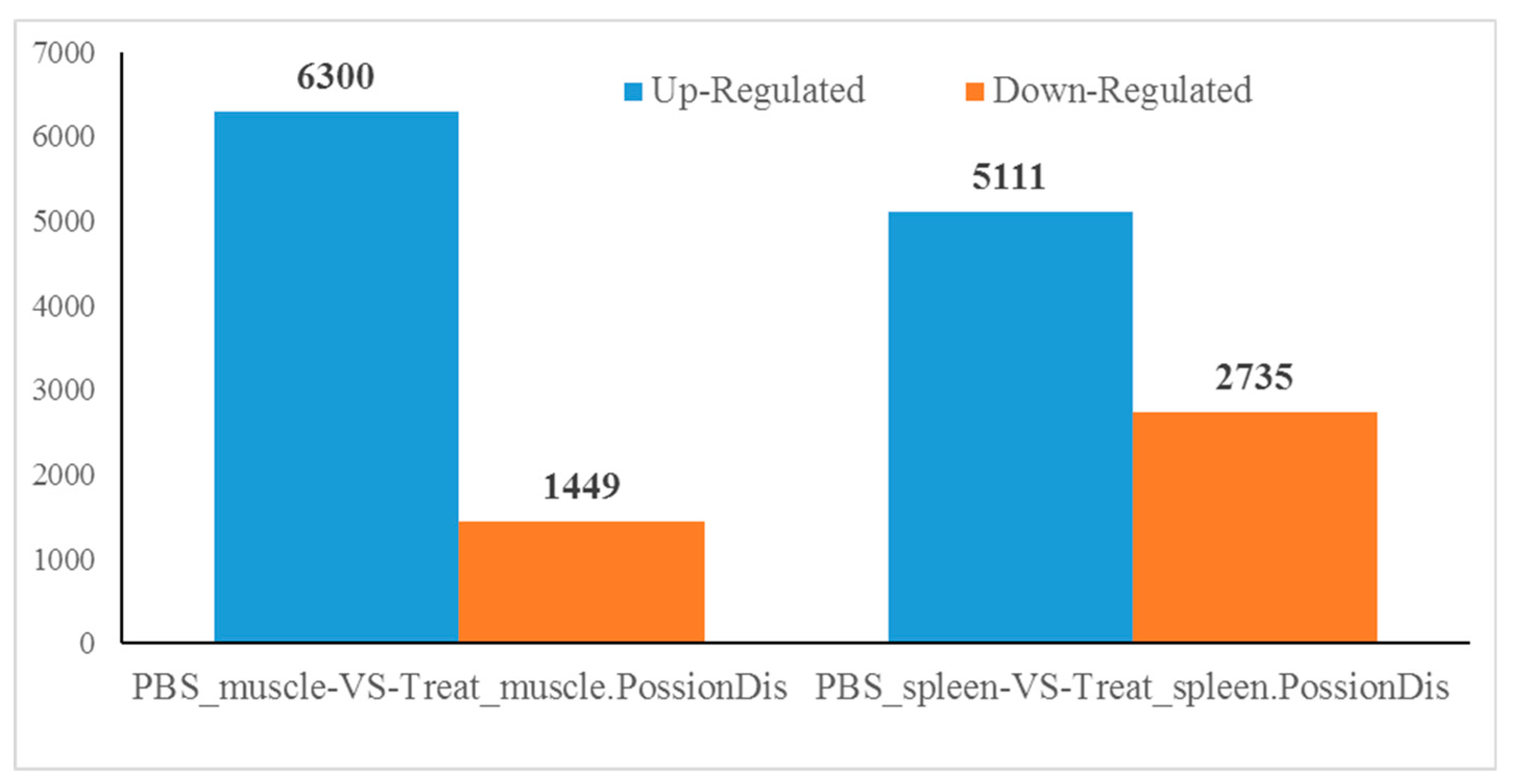 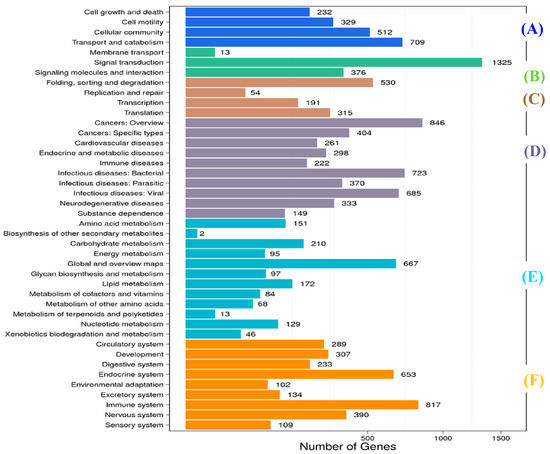 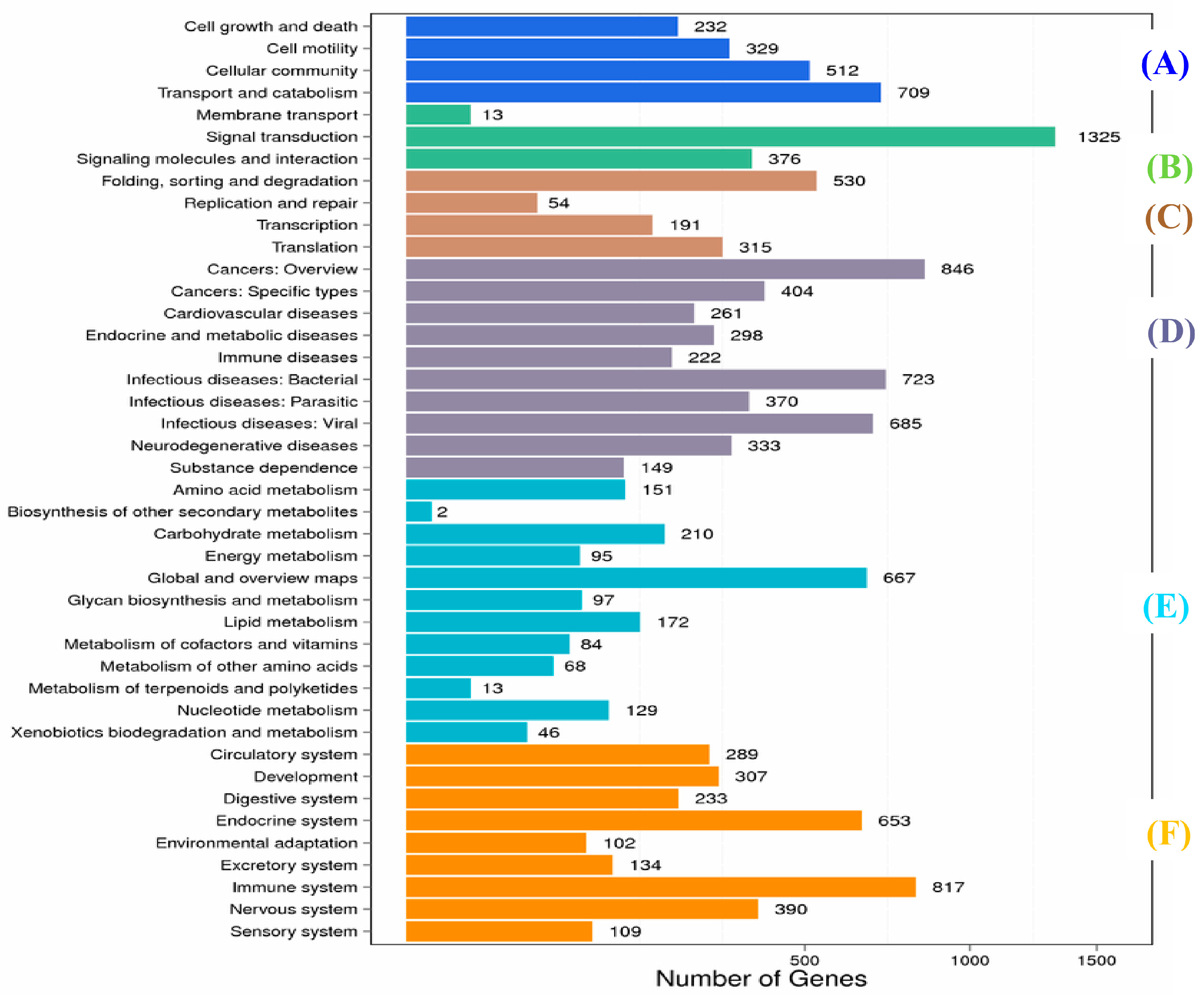 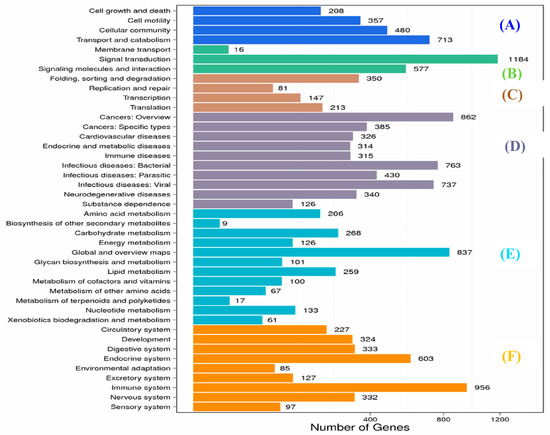 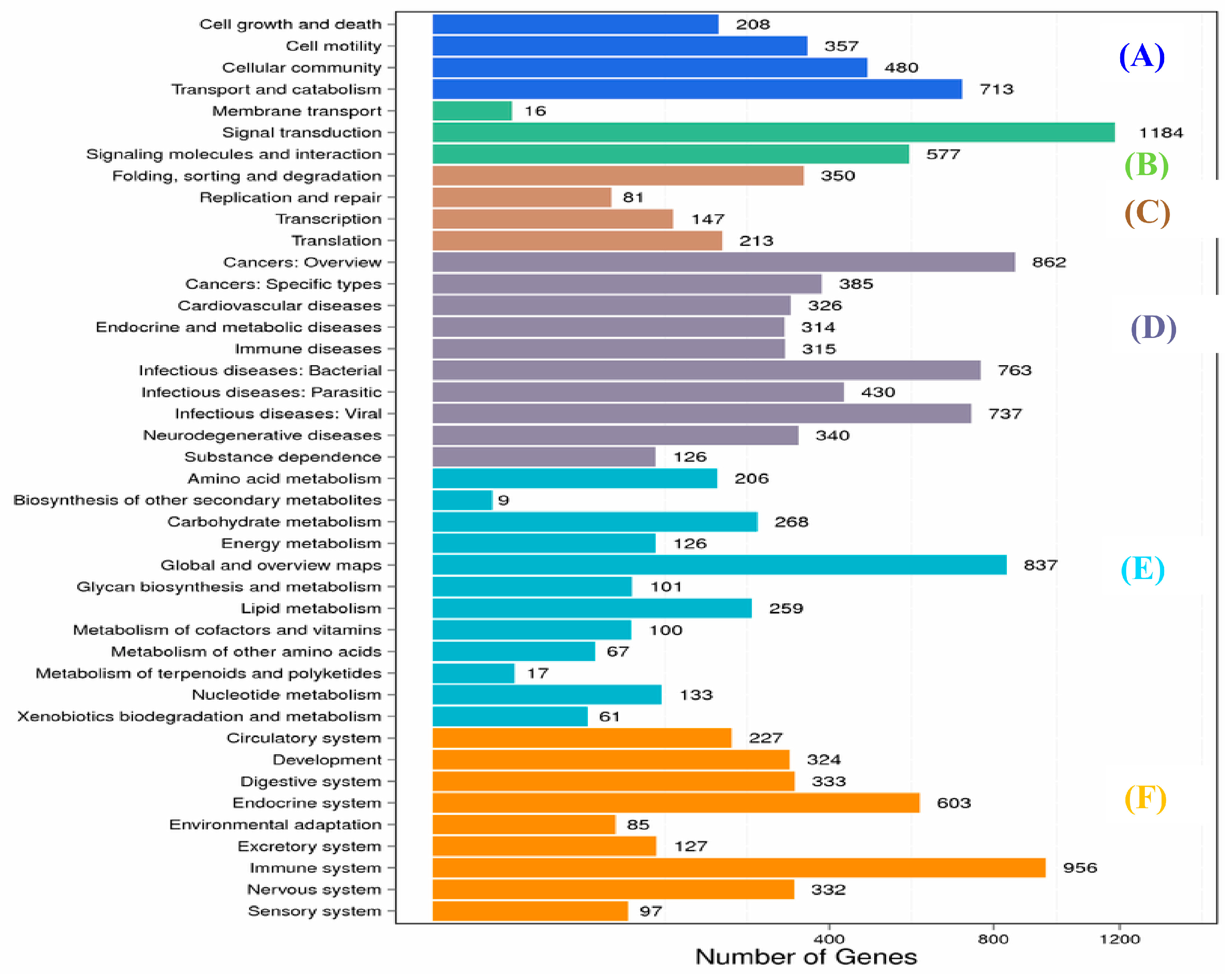 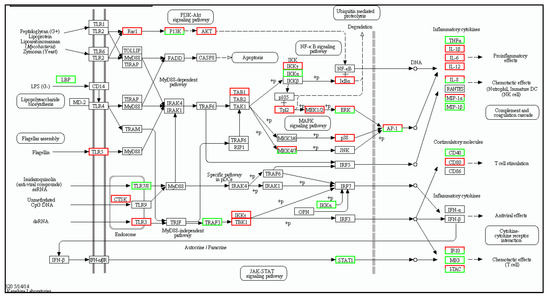 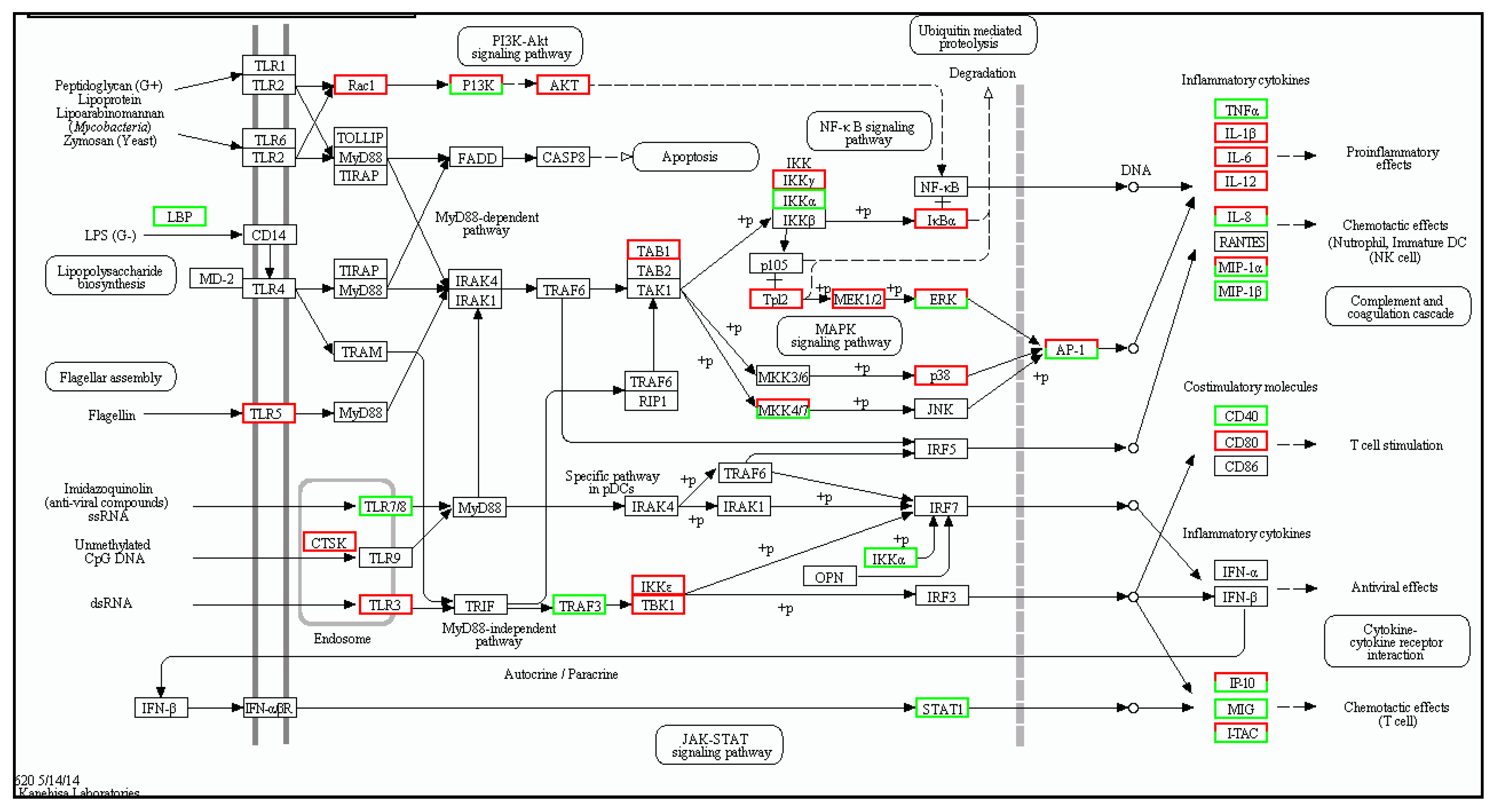 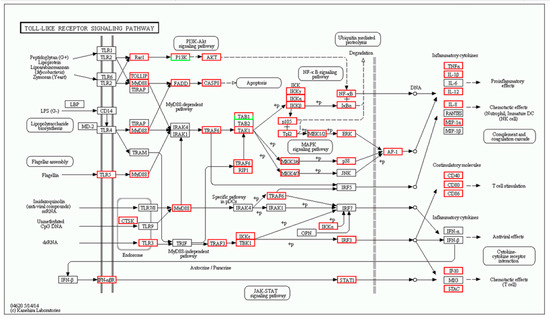 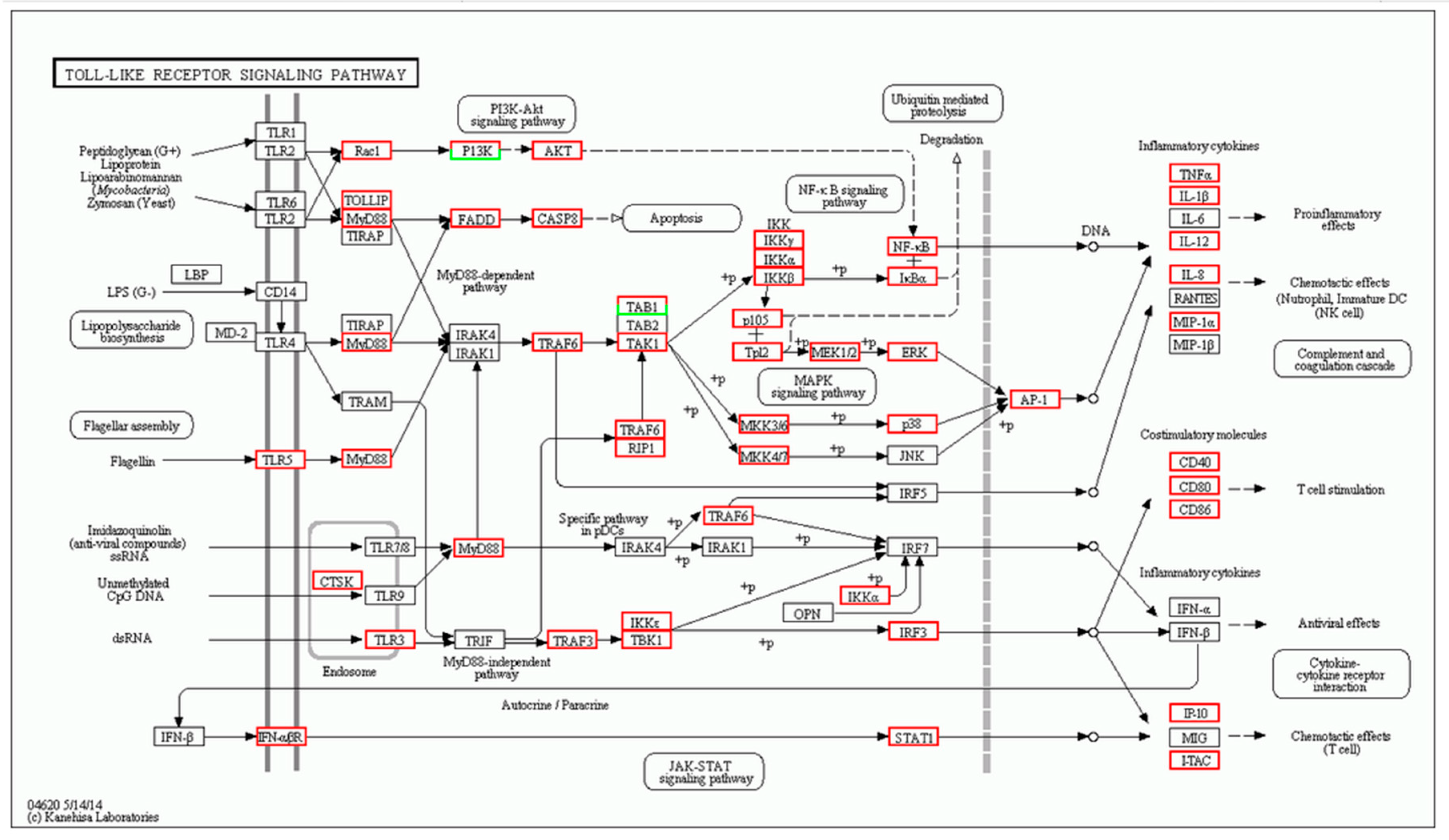 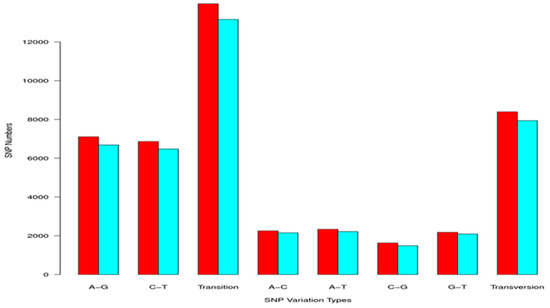 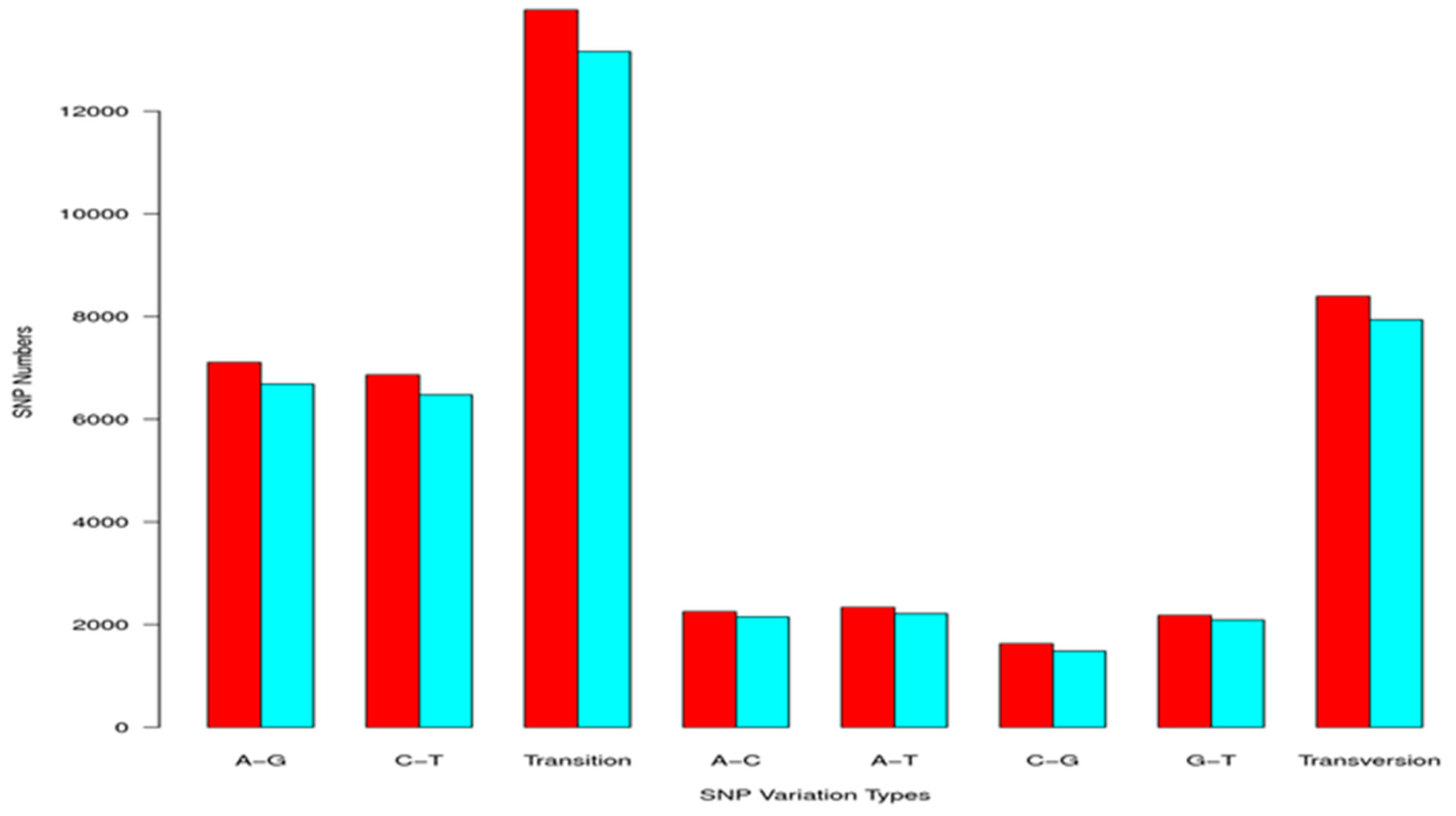