Glycosylation in the Thyroid Gland: Vital Aspects of Glycoprotein Function in Thyrocyte Physiology and Thyroid Disorders

Although many neurological and psychiatric disorders reveal clear sex-dependent variations, the molecular mechanism of this process is not clear enough. Astrocytes are involved in the response of neural tissue to injury and inflammation, produce steroid hormones, and sense steroid presence. To explore the hypothesis that astrocytes may participate in sex-mediated differences of inflammatory responses, we have examined whether male and female primary rat astrocytes show different responses to lipopolysaccharide (LPS) as a toll-like receptor 4 (TLR4) agonist. Levels of mRNA and proteins of tumor necrosis factor alpha (TNFα), interleukin-10 (IL-10), and cyclooxygenase (COX)-2 were assessed using qPCR, immunoblotting, and ELISA. UPLC-MS/MS was used to detect prostaglandins (PGs). LPS stimulation resulted in different levels of cytokine production; more TNFα and less IL-10 were produced in female cells compared with male astrocytes. Although the levels of the COX-2 expression were not altered, LPS significantly induced the synthesis of PGs with notable sex-related differences. PGE2 and PGD2 were less and 6-keto-PGF1α was more upregulated in female astrocytes, and TXB2 had similar levels in cells obtained from males and females. Trilostane, an inhibitor of 3β-Hydroxysteroid dehydrogenase (3β-HSD), inhibited the LPS-induced TNFα production and the release of PGE2, PGD2, and 6-keto-PGF1α in female astrocytes. Thus, male and female astrocytes differentially respond to inflammatory challenges on the level of production of cytokines and steroid hormones. Sex-mediated differences in pro- and anti-inflammatory responses should be taken into consideration for the effective treatment of disorders with neuroinflammation. View Full-Text
Keywords: sex difference; neuroinflammation; COX-2; 3β-HSD; astrocytes; trilostane; LPS; TLR4; IL-10; TNFα sex difference; neuroinflammation; COX-2; 3β-HSD; astrocytes; trilostane; LPS; TLR4; IL-10; TNFα
►▼ Show Figures 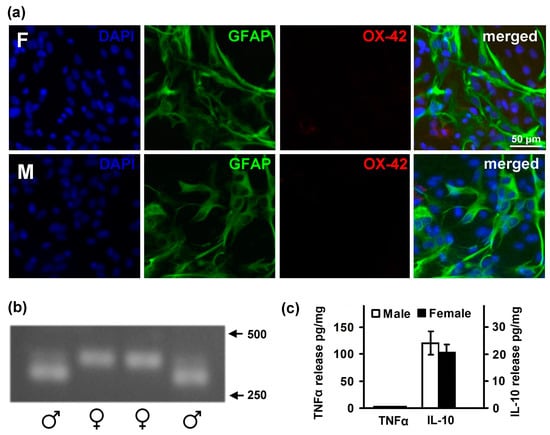