The macronutrient potassium is essential to plant growth, development and stress response. Alligator weed (Alternanthera philoxeroides) has a high tolerance to potassium deficiency (LK) stress. The stem is the primary organ responsible for transporting molecules from the underground root system to the aboveground parts of the plant. However, proteomic changes in response to LK stress are largely unknown in alligator weed stems. In this study, we investigated the physiological and proteomic changes in alligator weed stems under LK stress. First, the chlorophyll and soluble protein content and SOD and POD activity were significantly altered after 15 days of LK treatment. The quantitative proteomic analysis suggested that a total of 296 proteins were differentially abundant proteins (DAPs). The functional annotation analysis revealed that LK stress elicited complex proteomic alterations that were involved in oxidative phosphorylation, plant-pathogen interactions, glycolysis/gluconeogenesis, sugar metabolism, and transport in stems. The subcellular locations analysis suggested 104 proteins showed chloroplastic localization, 81 proteins showed cytoplasmic localization and 40 showed nuclear localization. The protein–protein interaction analysis revealed that 56 proteins were involved in the interaction network, including 9 proteins involved in the ribosome network and 9 in the oxidative phosphorylation network. Additionally, the expressed changes of 5 DAPs were similar between the proteomic quantification analysis and the PRM-MS analysis, and the expression levels of eight genes that encode DAPs were further verified using an RT-qPCR analysis. These results provide valuable information on the adaptive mechanisms in alligator weed stems under LK stress and facilitate the development of efficient strategies for genetically engineering potassium-tolerant crops. View Full-Text
Keywords: Alternanthera philoxeroides; proteomic; stem; potassium; stress Alternanthera philoxeroides; proteomic; stem; potassium; stress
►▼ Show Figures 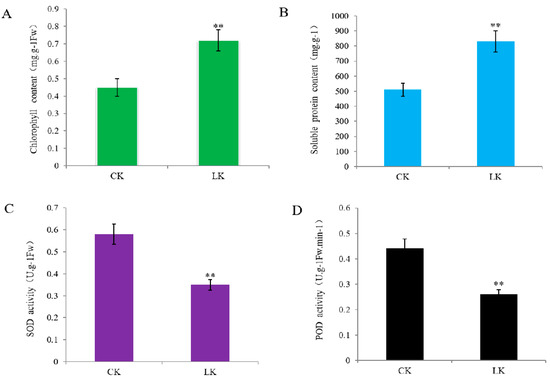