Rice foot rot disease caused by the pathogen Dickeya zeae (formerly known as Erwinia chrysanthemi pv. zeae), is a newly emerging damaging bacterial disease in China and the southeast of Asia, resulting in the loss of yield and grain quality. However, the genetic resistance mechanisms mediated by miRNAs to D. zeae are unclear in rice. In the present study, 652 miRNAs including osa-miR396f predicted to be involved in multiple defense responses to D. zeae were identified with RNA sequencing. A total of 79 differentially expressed miRNAs were detected under the criterion of normalized reads ≥10, including 51 known and 28 novel miRNAs. Degradome sequencing identified 799 targets predicted to be cleaved by 168 identified miRNAs. Among them, 29 differentially expressed miRNA and target pairs including miRNA396f-OsGRFs were identified by co-expression analysis. Overexpression of the osa-miR396f precursor in a susceptible rice variety showed enhanced resistance to D. zeae, coupled with significant accumulation of transcripts of osa-miR396f and reduction of its target the Growth-Regulating Factors (OsGRFs). Taken together, these findings suggest that miRNA and targets including miR396f-OsGRFs have a role in resisting the infections by bacteria D. zeae. View Full-Text
Keywords: rice foot rot disease; Dickeya zeae; microRNA; RNA and degradome sequencing; disease resistance rice foot rot disease; Dickeya zeae; microRNA; RNA and degradome sequencing; disease resistance
►▼ Show Figures 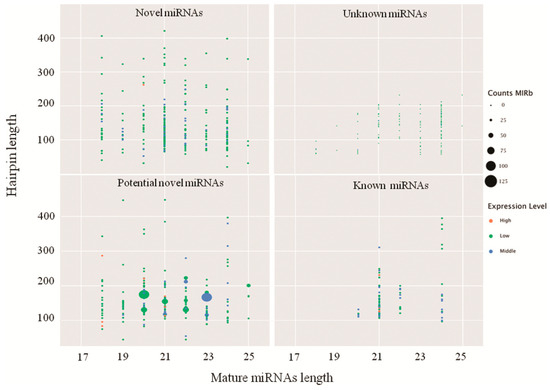