The Role of Soil Fungi in K+ Plant Nutrition

Miguel A. Botella
2 and

One of the most important adaptations of seagrasses during sea colonization was the capacity to grow at the low micromolar nitrate concentrations present in the sea. In contrast to terrestrial plants that use H+ symporters for high-affinity NO3− uptake, seagrasses such as Zostera marina L. use a Na+-dependent high-affinity nitrate transporter. Interestingly, in the Z. marina genome, only one gene (Zosma70g00300.1; NRT2.1) is annotated to this function. Analysis of this sequence predicts the presence of 12 transmembrane domains, including the MFS domains of the NNP transporter family and the “nitrate signature” that appears in all members of the NNP family. Phylogenetic analysis shows that this sequence is more related to NRT2.5 than to NRT2.1, sharing a common ancestor with both monocot and dicot plants. Heterologous expression of ZosmaNRT2-GFP together with the high-affinity nitrate transporter accessory protein ZosmaNAR2 (Zosma63g00220.1) in Nicotiana benthamiana leaves displayed four-fold higher fluorescence intensity than single expression of ZosmaNRT2-GFP suggesting the stabilization of NRT2 by NAR2. ZosmaNRT2-GFP signal was present on the Hechtian-strands in the plasmolyzed cells, pointing that ZosmaNRT2 is localized on the plasma membrane and that would be stabilized by ZosmaNAR2. Taken together, these results suggest that Zosma70g00300.1 would encode a high-affinity nitrate transporter located at the plasma membrane, equivalent to NRT2.5 transporters. These molecular data, together with our previous electrophysiological results support that ZosmaNRT2 would have evolved to use Na+ as a driving ion, which might be an essential adaptation of seagrasses to colonize marine environments. View Full-Text
Keywords: Z. marina genome; Na+-dependent NO3− high-affinity transporter; NRT2 Z. marina genome; Na+-dependent NO3− high-affinity transporter; NRT2
►▼ Show Figures 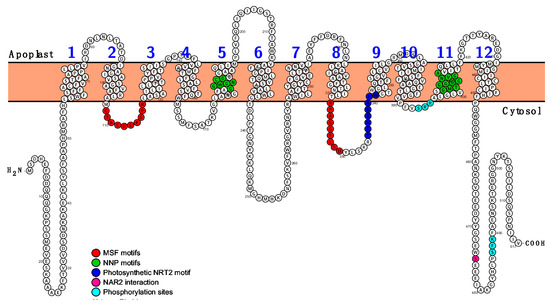