The Role of Adipose Tissue Mitochondria: Regulation of Mitochondrial Function for the Treatment of Metabolic Diseases
Next Article in Special Issue

Phytohormones (Auxin, Gibberellin) and ACC Deaminase In Vitro Synthesized by the Mycoparasitic Trichoderma DEMTkZ3A0 Strain and Changes in the Level of Auxin and Plant Resistance Markers in Wheat Seedlings Inoculated with this Strain Conidia

Both hormonal balance and plant growth may be shaped by microorganisms synthesizing phytohormones, regulating its synthesis in the plant and inducing plant resistance by releasing elicitors from cell walls (CW) by degrading enzymes (CWDE). It was shown that the Trichoderma DEMTkZ3A0 strain, isolated from a healthy rye rhizosphere, colonized the rhizoplane of wheat seedlings and root border cells (RBC) and caused approximately 40% increase of stem weight. The strain inhibited (in over 90%) the growth of polyphagous Fusarium spp. (F. culmorum, F. oxysporum, F. graminearum) phytopathogens through a mechanism of mycoparasitism. Chitinolytic and glucanolytic activity, strongly stimulated by CW of F. culmorum in the DEMTkZ3A0 liquid culture, is most likely responsible for the lysis of hyphae and macroconidia of phytopathogenic Fusarium spp. as well as the release of plant resistance elicitors. In DEMTkZ3A0 inoculated plants, an increase in the activity of the six tested plant resistance markers and a decrease in the concentration of indoleacetic acid (IAA) auxin were noted. IAA and gibberellic acid (GA) but also the 1-aminocyclopropane-1-carboxylic acid (ACC) deaminase (ACCD) enzyme regulating ethylene production by plant were synthesized by DEMTkZ3A0 in the liquid culture. IAA synthesis was dependent on tryptophan and negatively correlated with temperature, whereas GA synthesis was positively correlated with the biomass and temperature. View Full-Text
Keywords: Trichoderma; auxin indoleacetic acid (IAA); gibberellins; 1-aminocyclopropane-1-carboxylic acid (ACC) deaminase; plant resistance markers; mycoparasitism Trichoderma; auxin indoleacetic acid (IAA); gibberellins; 1-aminocyclopropane-1-carboxylic acid (ACC) deaminase; plant resistance markers; mycoparasitism
►▼ Show Figures 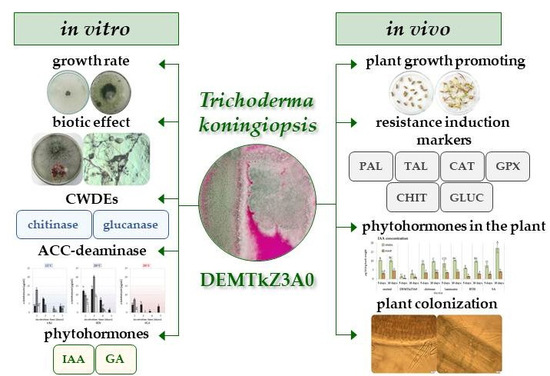