Phytohormones (Auxin, Gibberellin) and ACC Deaminase In Vitro Synthesized by the Mycoparasitic Trichoderma DEMTkZ3A0 Strain and Changes in the Level of Auxin and Plant Resistance Markers in Wheat Seedlings Inoculated with this Strain Conidia

Endophytic bacteria, as the most promising components of effective, biofertilizers biostimulating and biocontrol preparations, should be very intensively obtained from various plants and studied in terms of the conditions determining the potential ability to promote plant growth. For this reason, endophytic bacteria have been isolated from both stems and roots of up to six systematically distant species of vascular plants: one species belonging to the seedless vascular plants (Monilophyta), and five seed plants (Spermatophyta). The 23 isolated strains represented nine genera: Delftia, Stenotrophomonas, Rhizobium, Brevundimonas, Variovorax, Achromobacter, Novosphingobium, Comamonas and Collimonas, notably which were closely related—belonging to the phylum Proteobacteria. Stenotrophomonas sp. strains showed the greatest ability to synthesize indole-3-acetic acid (IAA)-like compounds, while Achromobacter sp. strains produced the highest levels of siderophores. The presence of the nifH gene and nitrogen binding activity was demonstrated for 95% of the strains tested. Stenotrophomonas maltophila (ES2 strain) showed the highest metabolic activity based on Biolog GEN III test. The ability to solubilize phosphate was determined only for three tested strains from genus: Delftia, Rhizobium and Novosphingobium. The presented work demonstrated that the metabolic and phenotypic properties of plant growth-promoting endophytes are correlated with the genus of bacteria and are not correlated with the host plant species or part of plant (stem, root). View Full-Text
Keywords: bacterial endophytes; physiological profiles; plant growth promoting properties bacterial endophytes; physiological profiles; plant growth promoting properties
►▼ Show Figures 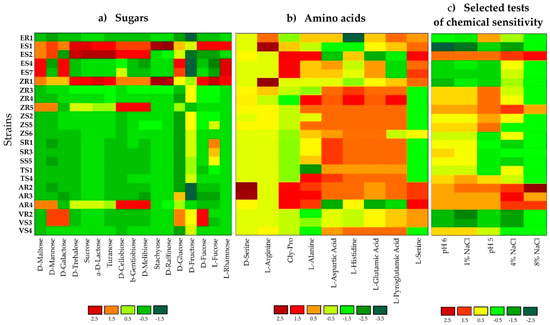