Granulocyte-colony stimulating factor (G-CSF)/nicotinamide phosphoribosyltransferase (NAMPT) signaling has been shown to be crucial for the modulation of neutrophil development and functionality. As this signaling pathway is significantly suppressed by type I interferons (IFNs), we aimed to study how the regulation of neutrophil differentiation and phenotype is altered in IFN-deficient mice during granulopoiesis. The composition of bone marrow granulocyte progenitors and their Nampt expression were assessed in bone marrow of type I IFN receptor knockout (Ifnar1-/-) mice and compared to wild-type animals. The impact of NAMPT inhibition on the proliferation, survival, and differentiation of murine bone marrow progenitors, as well as of murine 32D and human HL-60 neutrophil-like cell lines, was estimated. The progressive increase of Nampt expression during neutrophil progenitor maturation could be observed, and it was more prominent in IFN-deficient animals. Altered composition of bone marrow progenitors in these mice correlated with the dysregulation of apoptosis and altered differentiation of these cells. We observed that NAMPT is vitally important for survival of early progenitors, while at later stages it delays the differentiation of neutrophils, with moderate effect on their survival. This study shows that IFN-deficiency leads to the elevated NAMPT expression in the bone marrow, which in turn modulates neutrophil development and differentiation, even in the absence of tumor-derived stimuli. View Full-Text
Keywords: NAMPT; type I interferons; granulopoiesis; neutrophil progenitors; neutrophil maturation and survival; apoptosis NAMPT; type I interferons; granulopoiesis; neutrophil progenitors; neutrophil maturation and survival; apoptosis
►▼ Show Figures 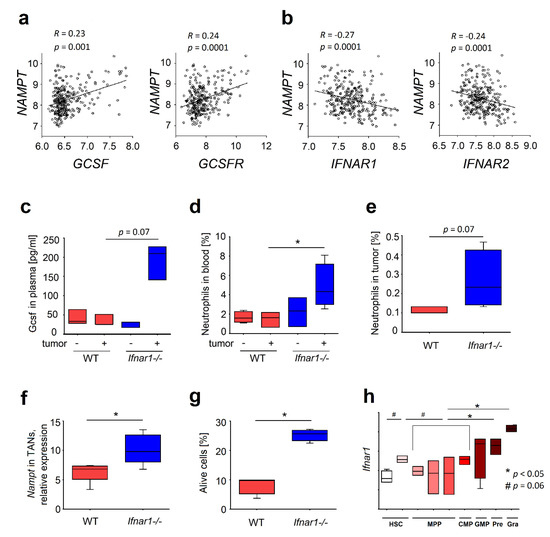