Predictive Value of Serum Antibodies and Point Mutations of AQP4, AQP1 and MOG in A Cohort of Spanish Patients with Neuromyelitis Optica Spectrum Disorders
Next Article in Special Issue

The C-Type Lysozyme from the upper Gastrointestinal Tract of Opisthocomus hoatzin, the Stinkbird

Uridine-5’-diphosphate (UDP)-glucose is reported as one of the most versatile building blocks within the metabolism of pro- and eukaryotes. The activated sugar moiety is formed by the enzyme UDP-glucose pyrophosphorylase (GalU). Two homologous enzymes (designated as RoGalU1 and RoGalU2) are encoded by most Rhodococcus strains, known for their capability to degrade numerous compounds, but also to synthesize natural products such as trehalose comprising biosurfactants. To evaluate their functionality respective genes of a trehalose biosurfactant producing model organism—Rhodococcus opacus 1CP—were cloned and expressed, proteins produced (yield up to 47 mg per L broth) and initially biochemically characterized. In the case of RoGalU2, the Vmax was determined to be 177 U mg−1 (uridine-5’-triphosphate (UTP)) and Km to be 0.51 mM (UTP), respectively. Like other GalUs this enzyme seems to be rather specific for the substrates UTP and glucose 1-phosphate, as it accepts only dTTP and galactose 1-phoshate in addition, but both with solely 2% residual activity. In comparison to other bacterial GalU enzymes the RoGalU2 was found to be somewhat higher in activity (factor 1.8) even at elevated temperatures. However, RoGalU1 was not obtained in an active form thus it remains enigmatic if this enzyme participates in metabolism. View Full-Text
Keywords: glycosylation; UDP-glucose pyrophosphorylase; UDP-glucose; nucleotide donors; Rhodococcus, Actinobacteria, gene redundancy; Leloir glycosyltransferases; activated sugar; UTP glycosylation; UDP-glucose pyrophosphorylase; UDP-glucose; nucleotide donors; Rhodococcus, Actinobacteria, gene redundancy; Leloir glycosyltransferases; activated sugar; UTP
►▼ Show Figures 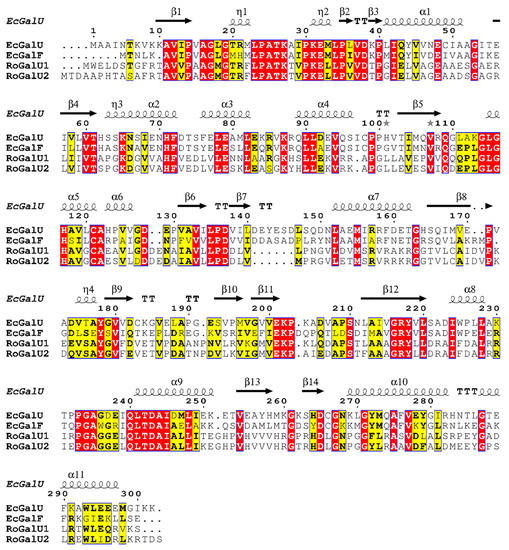