Bioactive Glass Applications in Dentistry
Next Article in Special Issue

Role of Cadherins in Cancer—A Review
Previous Article in Journal

Cadherins are a major family of cell–cell adhesive receptors, which are implicated in development, tissue homeostasis, and cancer. Here, we show a novel mechanism of post-translational regulation of E-cadherin in cancer cells by an intramembrane protease of the Rhomboid family, RHBDL2, which leads to the shedding of E-cadherin extracellular domain. In addition, our data indicate that RHBDL2 mediates a similar activity on VE-cadherin, which is selectively expressed by endothelial cells. We show that RHBDL2 promotes cell migration, which is consistent with its ability to interfere with the functional role of cadherins as negative regulators of motility; moreover, the two players appear to lie in the same functional pathway. Importantly, we show that RHBDL2 expression is induced by the inflammatory chemokine TNFα. The E-cadherin extracellular domain is known to be released by metalloproteases (MMPs); however, here, we provide evidence of a novel MMP-independent, TNFα inducible, E-cadherin processing mechanism that is mediated by RHBDL2. Thus, the intramembrane protease RHBDL2 is a novel regulator of cadherins promoting cell motility. View Full-Text
Keywords: rhomboid; E-cadherin; proteolytic cleavage; cell migration; TNFα rhomboid; E-cadherin; proteolytic cleavage; cell migration; TNFα
►▼ Show Figures 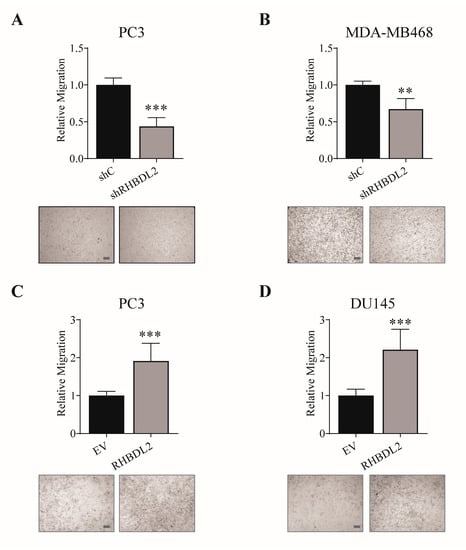