Different Forms of TFF2, A Lectin of the Human Gastric Mucus Barrier: In Vitro Binding Studies

The gastric secretory trefoil factor family (TFF) peptides xP1 and xP4 are the Xenopus laevis orthologs of mammalian TFF1 and TFF2, respectively. The aim of this study was to analyze the molecular forms of xP1 and xP4 in the X. laevis gastric mucosa by FPLC. xP1 mainly occurred in a monomeric low-molecular-mass form and only a minor subset is associated with the mucus fraction. The occurrence of monomeric xP1 is unexpected because of its odd number of cysteine residues. Probably a conserved acidic residue flanking Cys55 allows monomeric secretion. Furthermore, Cys55 is probably post-translationally modified. For the first time, we hypothesize that the free thiol of monomeric xP1-and probably also its mammalian ortholog TFF1-could have a protective scavenger function, e.g., for reactive oxygen/nitrogen species. In contrast, xP4 mainly occurs in a high-molecular-mass form and is non-covalently bound to a mucin similarly as TFF2. In vitro binding studies with radioactively labeled porcine TFF2 even showed binding to X. laevis gastric mucin. Thus, xP4 is expected to bind as a lectin to an evolutionary conserved sugar epitope of the X. laevis ortholog of mucin MUC6 creating a tight mucus barrier. Taken together, xP1 and xP4 appear to have different gastric protective functions. View Full-Text
Keywords: trefoil factor; TFF1; TFF2; lectin; mucin; gastric protection; oxidative stress; thiol; cysteine; ROS trefoil factor; TFF1; TFF2; lectin; mucin; gastric protection; oxidative stress; thiol; cysteine; ROS
►▼ Show Figures 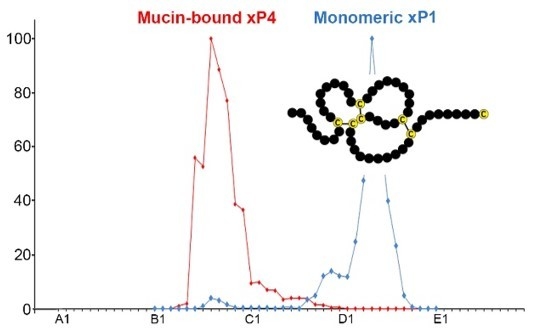