Body size is one of the most important attributes of a species, but the basic question of why and how each species reaches a different “right size” is still largely unknown. Herein, three phylogenetically closely related catfishes from Sisoridae, including one extraordinarily large-sized Bagarius yarrelli and two average-sized Glyptothorax macromaculatus and Oreoglanis setiger, were comparatively studied using RNA-Seq. Approximately 17,000 protein-coding genes were annotated for each of the three fishes, and 9509 genes were identified as high-confidence orthologous gene pairs. Comparative expressions uncovered a similar functional cluster about ribosome biogenesis was enriched in different tissues of the upregulated genes of Bagarius yarrelli. Moreover, differentially expressed genes and positively selected genes revealed that the glycolysis/pyruvate metabolism and cell cycle pathways have also greatly enhanced in this large-sized species. In total, 20 size-related candidate genes (including two growth modulators: the serine/threonine-protein kinases 3 (AKT3) and adaptor protein 1 (SH2B1), and a crucial pyruvate kinase (PKM2A)) were identified by multiplying comparative analyses along with gene functional screening, which would play major roles in enabling the large body size associated with Bagarius yarrelli and provide new insights into body size evolution. In conjunction with field observations and morphological comparisons, we hypothesize that habitat preferences promote size divergence of sisorids. View Full-Text
Keywords: Bagarius; body size; growth; ribosome; pyruvate metabolic Bagarius; body size; growth; ribosome; pyruvate metabolic
►▼ Show Figures 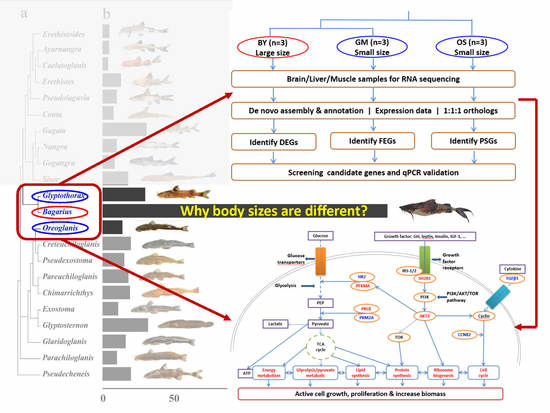