A Dual Role of Heme Oxygenase-1 in Cancer Cells

Paracetamol is responsible for acute liver failure in humans and experimental animals when taken at high doses and transformed into a reactive metabolite by the liver cytochrome P450. On the other hand, nutmeg is rich with many phytochemical ingredients that are known for their ability to inhibit cytochrome P450. Hence, the present experiment was aimed at studying the hepatoprotective effect of Myristica fragrans (nutmeg), kernel extract (MFKE) in respect to paracetamol (acetaminophen; N-acetyl-p-amino-phenol (APAP))-induced hepatotoxicity in rats, focusing on its antioxidant, anti-inflammatory, and anti-apoptotic activities. Liver toxicity was induced in rats by a single oral administration of APAP (2 g/kg). To evaluate the hepatoprotective effect of MFKE against this APAP-induced hepatotoxicity, rats were pre-treated with either oral administration of MFKE at 300 mg/kg daily for seven days or silymarin at 50 mg/kg as a standard hepatoprotective agent. APAP intoxication caused a drastic elevation in liver function markers (transaminases, alkaline phosphatase, and total bilirubin), oxidative stress indicators (lipid peroxidation and nitric oxide), inflammatory biomarkers (tumour necrosis factor-α, interleukin-1β, inducible nitric oxide synthase, and nuclear factor ĸB) and the pro-apoptotic BCL2 Associated X (Bax) and caspases-3 genes. Furthermore, analyses of rat liver tissue revealed that APAP significantly depleted glutathione and inhibited the activities of antioxidant enzymes in addition to downregulating two key anti-apoptotic genes: Cellular FLICE (FADD-like IL-1β-converting enzyme)-inhibitory protein (c-FLIP) and B-cell lymphoma 2 (Bcl-2). Pre-treatment with MFKE, however, attenuated APAP-induced liver toxicity by reversing all of these toxicity biomarkers. This hepatoprotective effect of MFKE was further confirmed by improvement in histopathological findings. Interestingly, the hepatoprotective effect of MFKE was comparable to that offered by the reference hepatoprotector, silymarin. In conclusion, our results revealed that MFKE had antioxidant, anti-inflammatory, and anti-apoptotic properties, and it is suggested that this hepatoprotective effect could be linked to its ability to promote the nuclear factor erythroid 2–related factor 2 (Nrf2)/antioxidant responsive element (ARE) pathway. View Full-Text
Keywords: paracetamol; Myristica fragrans kernels; heme oxygenase 1; liver paracetamol; Myristica fragrans kernels; heme oxygenase 1; liver
►▼ Show Figures 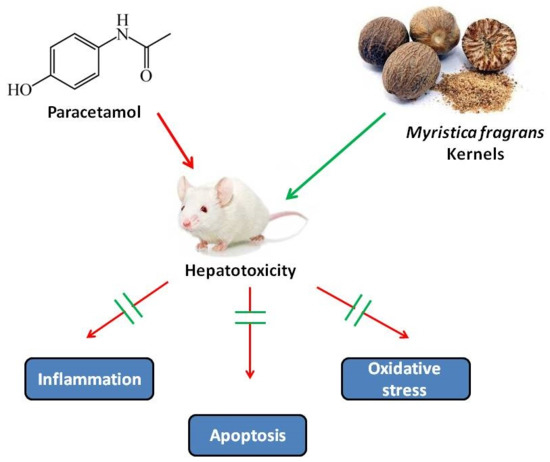