Impacts of Silver Nanoparticles on Plants: A Focus on the Phytotoxicity and Underlying Mechanism

In this study, two Burkholderia strains, strain KNU17BI2 and strain KNU17BI3, were isolated from maize rhizospheric soil, South Korea. The 16S rRNA gene and multilocus sequence analysis and typing (MLSA-MLST) were used for the identification of the studied strains. Strain KNU17BI2, which belonged to Burkholderia cenocepacia, was of a novel sequence type (ST) designated ST-1538, while strain KNU17BI3 had a similar allelic profile with the seven loci of Burkholderia contaminans strain LMG 23361. The strains were evaluated in vitro for their specific plant growth promoting (PGP) traits, such as zinc solubilization, phosphate solubilization, ammonia production, 1-aminocyclopropane-1-carboxylate (ACC) deaminase activity, indole acetic acid (IAA) production, siderophore, and hydrolytic enzyme activity. Interestingly, the strains exhibited a positive effect on all of the tested parameters. The strains also showed broad-spectrum antifungal activity against economically important phytopathogens in the dual culture assay. Furthermore, the strains were evaluated under greenhouse conditions for their in vivo effect to promote plant growth and to suppress the root rot of maize that is caused by Fusarium temperatum on four Korean maize cultivars. The results of the greenhouse study revealed that both of the strains were promising to significantly suppress fusarium root rot and enhance plant growth promotion on the four maize cultivars. This study, for the first time, reported in vitro antifungal potential of B. cenocepacia of novel ST against economically important plant pathogens viz., F. temperatum, Fusarium graminearum, Fusarium moniliforme, Fusarium oxysporum f.sp. melonis, Fusarium subglutinans, Phytophthora drechsleri, and Stemphylium lycopersici. This is also the first report of zinc solubilization by B. cenocepacia. Moreover, the present research work reports, for the first time, about the potential of B. cenocepacia and B. contaminans to control the root rot of maize that is caused by F. temperatum. Therefore, we recommend further studies to precisely identify the bioactive chemical compounds behind such activities that would be novel sources of natural products for biological control and plant growth promotion of different crops. View Full-Text
Keywords: Burkholderia cenocepacia; Burkholderia contaminans; Fusarium temperatum; MLSA-MLST; sequence type (ST); root rot; Zea mays Burkholderia cenocepacia; Burkholderia contaminans; Fusarium temperatum; MLSA-MLST; sequence type (ST); root rot; Zea mays
►▼ Show Figures 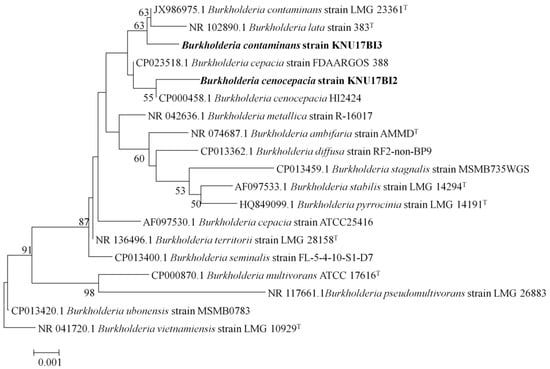