Comparative Transcriptome Analysis Reveals the Transcriptional Alterations in Growth- and Development-Related Genes in Sweet Potato Plants Infected and Non-Infected by SPFMV, SPV2, and SPVG
Next Article in Special Issue

Osmotic Demyelination: From an Oligodendrocyte to an Astrocyte Perspective
Previous Article in Journal

The dysfunction of astrocytic inwardly rectifying potassium (Kir) 4.1 channels, which mediate the spatial potassium-buffering function of astrocytes, is known to be involved in the development of epilepsy. Here, we analyzed the Kir4.1 expressional changes in Leucine-Rich Glioma-Inactivated 1 (Lgi1) mutant rats, which is a model of autosomal dominant lateral temporal lobe epilepsy in humans, to clarify the role of astrocytic Kir4.1 channels in Lgi1-related epileptogenesis. Priming acoustic stimulation (at postnatal day 16) conferred seizure susceptibility on Lgi1 mutant rats, which evoked audiogenic seizures with test stimulation at eight weeks. In the seizure-susceptible Lgi1 mutant rats (before test stimulation), astrocytic Kir4.1 expression was down-regulated region-specifically in the cerebral cortex, hippocampus, and amygdala. In addition, prophylactic treatments of Lgi1 mutant rats with valproic acid (VPA, 30 mg/kg and 200 mg/kg) for two weeks prevented both the development of seizure susceptibility and the down-regulation of Kir4.1 expression in astrocytes. The present study demonstrated for the first time that the astrocytic Kir4.1 expression was reduced in the Lgi1-related seizure model, suggesting that the down-regulation of Kir4.1 channels in astrocytes is involved in audiogenic epileptogenesis caused by Lgi1 mutation. In addition, VPA seemed to have a prophylactic effect on Lgi1-related seizures.
Keywords: astrocytes; epilepsy; Kir4.1 channels; Lgi1; ADLTE; antiepileptics; valproic acid astrocytes; epilepsy; Kir4.1 channels; Lgi1; ADLTE; antiepileptics; valproic acid

Astrocytes are a major component of glial cells in the brain that form tripartite synapses in conjunction with neuronal components (presynaptic nerve terminal and postsynaptic neuronal membrane), and actively regulate the excitability and plasticity of neurons. They maintain extracellular ion homeostasis, metabolize neurotransmitters (e.g., glutamate and GABA), and secrete various neuroactive substances (e.g., gliotransmitters, neurotrophic factors, and cytokines) [1,2,3]. Specifically, the spatial potassium (K+) buffering by astrocytes’ functions is a clearance mechanism of excessive extracellular K+ secreted from excited neurons, and is essential for controlling neuronal excitability. If astrocytic K+ buffering is disrupted, it increases the extracellular levels of K+ and glutamate at the synapses, and causes the abnormal excitation of neurons [4,5,6,7].
Spatial K+ buffering currents in astrocytes are primarily conducted by the inwardly rectifying K+ (Kir) channels containing Kir4.1 subunits (Kir4.1 channels), which consist of Kir4.1 homotetramer and Kir4.1/5.1 heterotetramer channels [7,8]. Previous studies using conditional knockout mice have shown that the specific deletion of Kir4.1 in astrocytes depolarized their resting membrane potential and markedly reduced the transport capacity of K+ and glutamate into astrocytes, causing ataxia, epileptic symptoms, and early mortality [9]. These findings suggest that disruption of the spatial K+ buffering function of astrocytes is associated with the induction of motor disorders, including epilepsy. In fact, loss-of-function mutations in the human KCNJ10 gene encoding Kir4.1 were reported to cause the epileptic disorders known as “EAST” (Epilepsy, Ataxia, Sensorineural deafness, and Tubulopathy) or “SeSAME” (Seizures, Sensorineural deafness, Ataxia, Mental retardation, and Electrolyte imbalance) syndrome [10,11,12]. In addition, astrocytic Kir4.1 expression was known to be reduced (down-regulated) in some brain regions (e.g., hippocampus and amygdala) in rodent epilepsy models [13,14], and in seizure focus specimens from temporal lobe epilepsy (TLE) patients [15,16,17], suggesting that the reduced activity of the Kir4.1 channels evokes seizures. Furthermore, we previously showed that the inhibition (knockdown or blockade) of Kir4.1 channels facilitated the expression of brain-derived neurotrophic factor (BDNF) in astrocytes, which has long been implicated in the development of epilepsy (epileptogenesis) [18,19]. Interestingly, repeated treatments with antiepileptic drugs such as valproic acid (VPA) were found to up-regulate (elevate) the expression of astrocytic Kir4.1 channels in the limbic regions (e.g., amygdala and hippocampus) [20]. Therefore, astrocytic Kir4.1 channels seem to closely participate in the pathogenesis and treatment of epilepsy both in animals and in patients.
Autosomal dominant lateral temporal lobe epilepsy (ADLTE, OMIM 600512) is an epilepsy disorder with characteristic manifestations such as auditory auras and seizures triggered by auditory stimuli. ADLTE was reported to be caused by several heterozygous mutations of leucine-rich glioma-inactivated 1 (LGI1) [21,22]. Moreover, the secreted synaptic protein Lgi1 has been shown to regulate the function of α-amino-3-hydroxy-5-methyl-4-isoxazolepropionic acid (AMPA)-type glutamate receptors and potassium channels (e.g., Kv1.1 channels) by forming complexes with a disintegrin and metalloproteinase protein 22 (ADAM22) and ADAM23, which are members of the membrane-anchored protein family [23,24,25,26]. However, the pathophysiological mechanisms underlying Lgi1-related epileptogenesis remain unknown.
We previously developed a novel rat model of Lgi1-related seizures that carries a missense mutation (L385R) of the Lgi1 gene [27]. The Lgi1 mutant rats showed audiogenic seizure susceptibility, resembling the clinical features of ADLTE [27,28]. In the present study, we evaluated the Kir4.1 expressional changes in astrocytes during the development of audiogenic epilepsy in Lgi1 mutant rats to clarify the potential involvement of astrocytic Kir4.1 channels in Lgi1-related epileptogenesis. Moreover, we also studied the prophylactic actions of VPA in Lgi1-related epileptogenesis, with a focus on its regulation of Kir4.1 channel expression.

2.4. Expressional Changes in Astrocytic Kir4.1 with Treatment of VPA

Similar to the results of prior experiments, the Kir4.1 expression rate significantly decreased in the cerebral cortex (Au1 and Pir), hippocampus (CA1, CA2, and DG), and amygdala (BMP) in the primed Lgi1 mutant rats treated with saline (Figure 7). However, the prophylactic treatment with VPA (30 mg/kg and 200 mg/kg, i.p.) for two weeks significantly elevated the Kir4.1 expression rate in a dose-related manner in the cerebral cortex (Pir), hippocampus (CA1 and CA2), and amygdala (BMP) (Figure 7).

F344-Lgi1m1Kyo rats (NBRP Rat No. 0656), carrying a heterozygous missense mutation (L385R/+) generated by N-ethyl-N-nitrosourea (ENU) mutagenesis [27], were obtained from the National BioResource Project-Rat (NBRP-Rat, http://www.anim.med.kyoto-u.ac.jp). The housing conditions of the rats and animal care methods complied with the Guide for the Care and Use of Laboratory Animals of the Ministry of Education, Science, Sports and Culture of Japan. The experimental procedures used were approved by the Animal Research Committee of Kyoto University (Med Kyo 14560, 6 November 2014) and Osaka University of Pharmaceutical Sciences (No.15, 30 March 2015). Only male rats were used for phenotypic analyses.

Animals divided into four groups (Group A–D) were individually exposed to auditory stimulation using a previously reported method [27,28] (Figure 1). Priming stimulation was performed in P16 rats with a sound stimulus (130 dB, 10 kHz, five minutes). Test stimulation was performed with a sound stimulus (130 dB, 10 kHz, one minute) at eight weeks. Within two hours after seizure induction or a sham procedure, the animals were deeply anesthetized with pentobarbital (80 mg/kg, i.p.) that was transcardially perfused with ice-cold phosphate-buffered saline (PBS), and then with 4% paraformaldehyde solution. The brains were removed from the skull and placed in fresh fixative for 24 h.

To determine whether an antiepileptic agent modified the pathophysiological alterations in Kir4.1 channels in Lgi1-related epileptogenesis, we studied the prophylactic actions of VPA in Lgi1 mutant rats, with a focus on its regulation of Kir4.1 channel expression. From one day before priming stimulation, animals were intraperitoneally injected with VPA (30 mg/kg and 200 mg/kg) (Sigma-Aldrich) or saline for 14 continuous days (Figure 6). Then, the animals were subjected to the audiogenic seizure test four weeks after the last VPA treatment, and brain samples were obtained as described previously.

We would like to thank the National BioResource Project-Rat (http://www.anim.med.kyoto-u.ac.jp/NBR/) for providing rat strains (F344-Lgi1m1Kyo, No. 0656). 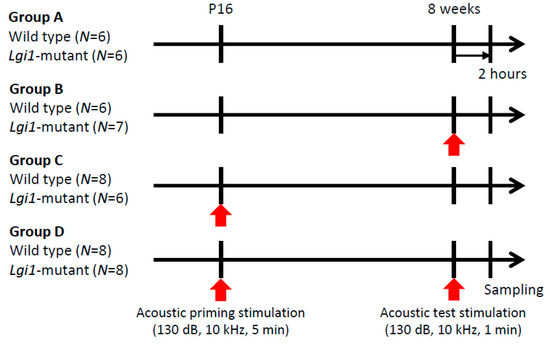 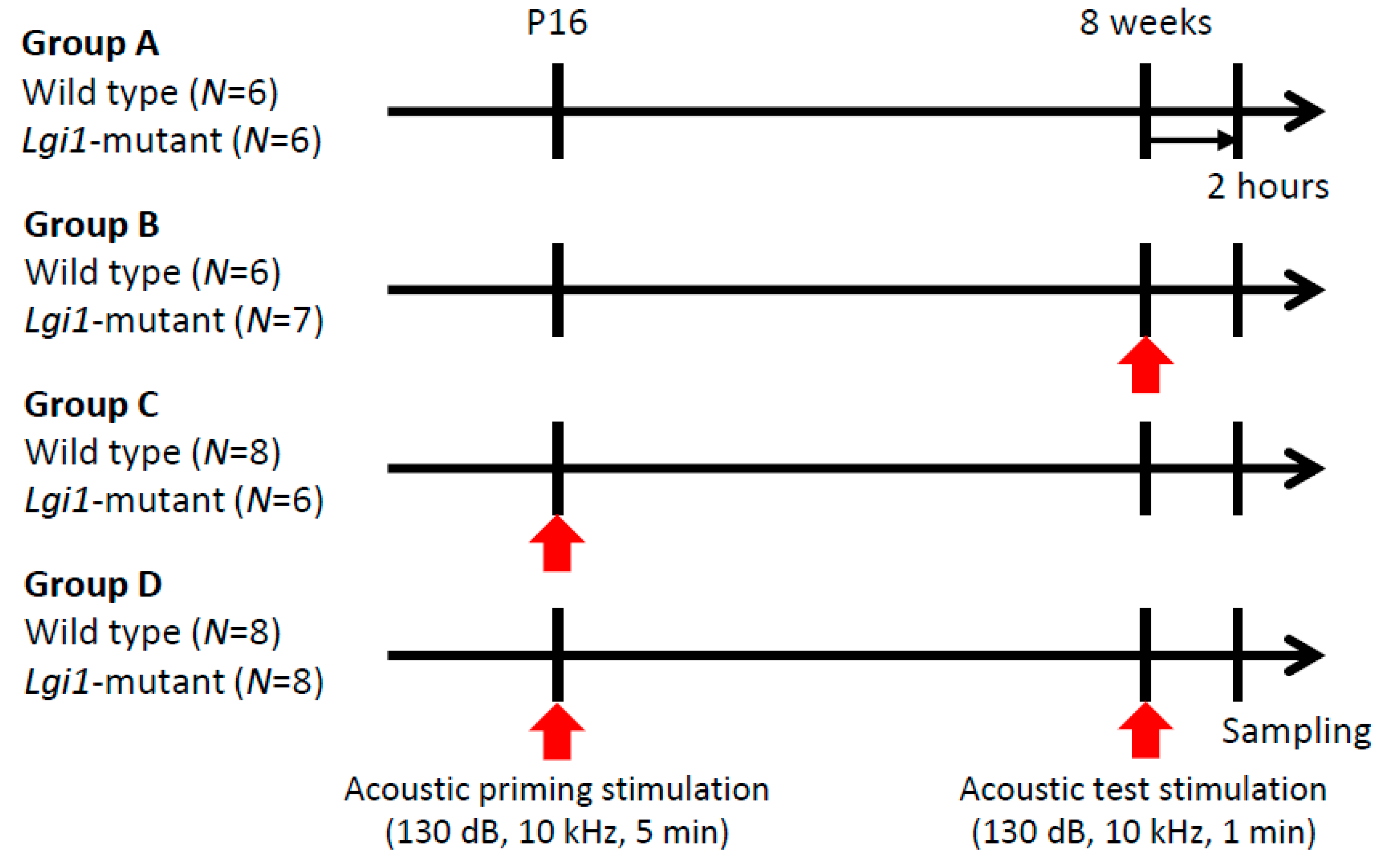 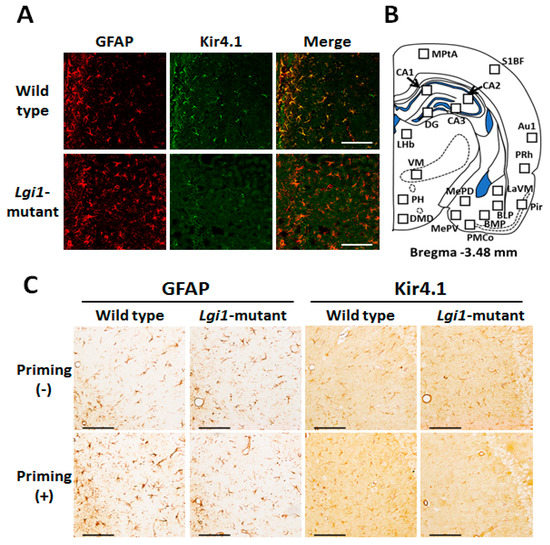 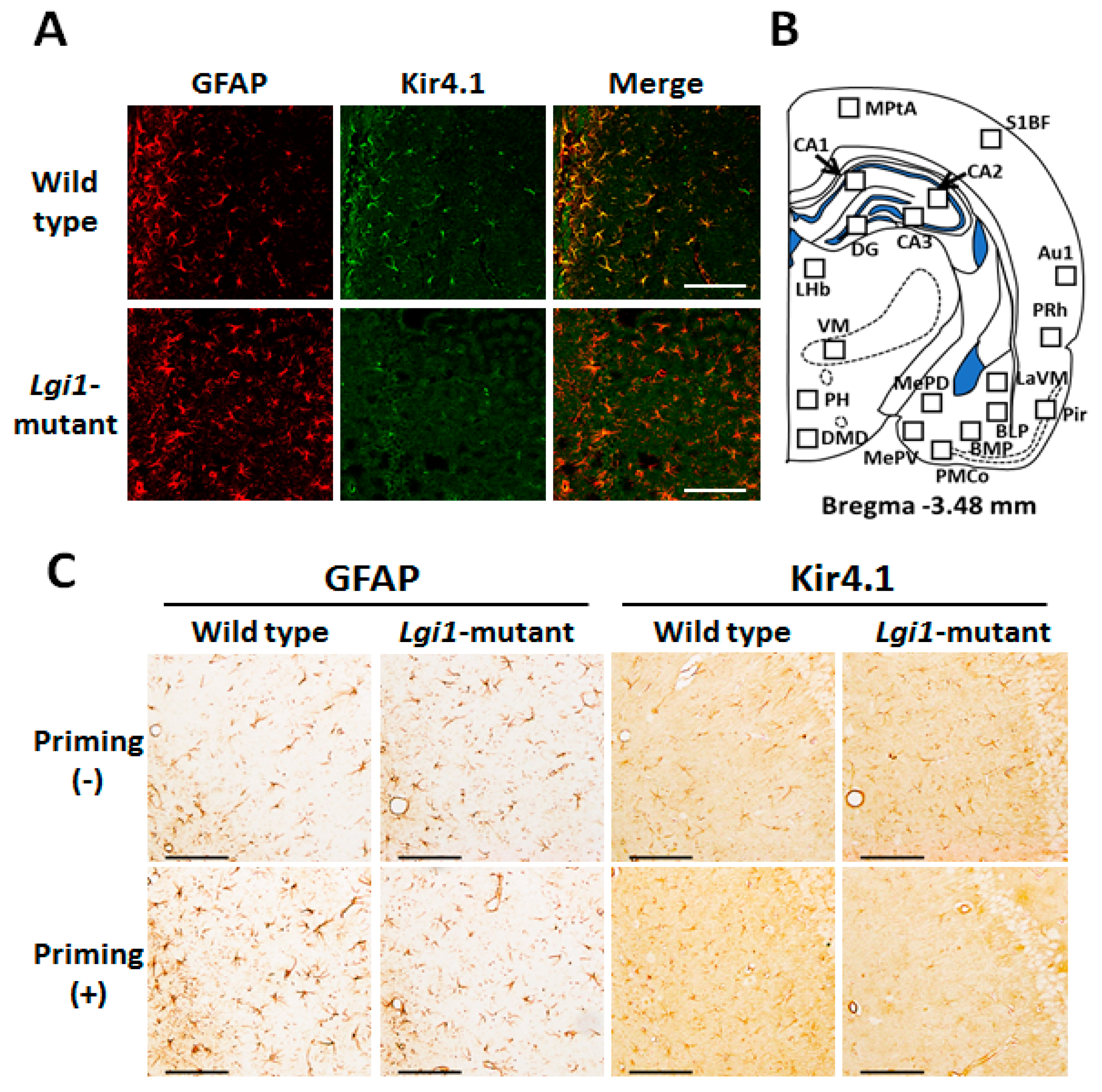 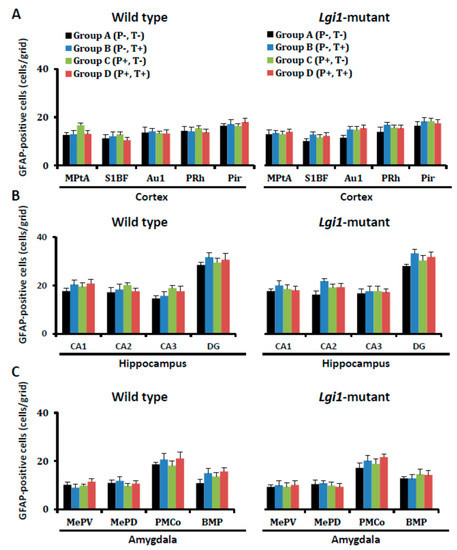 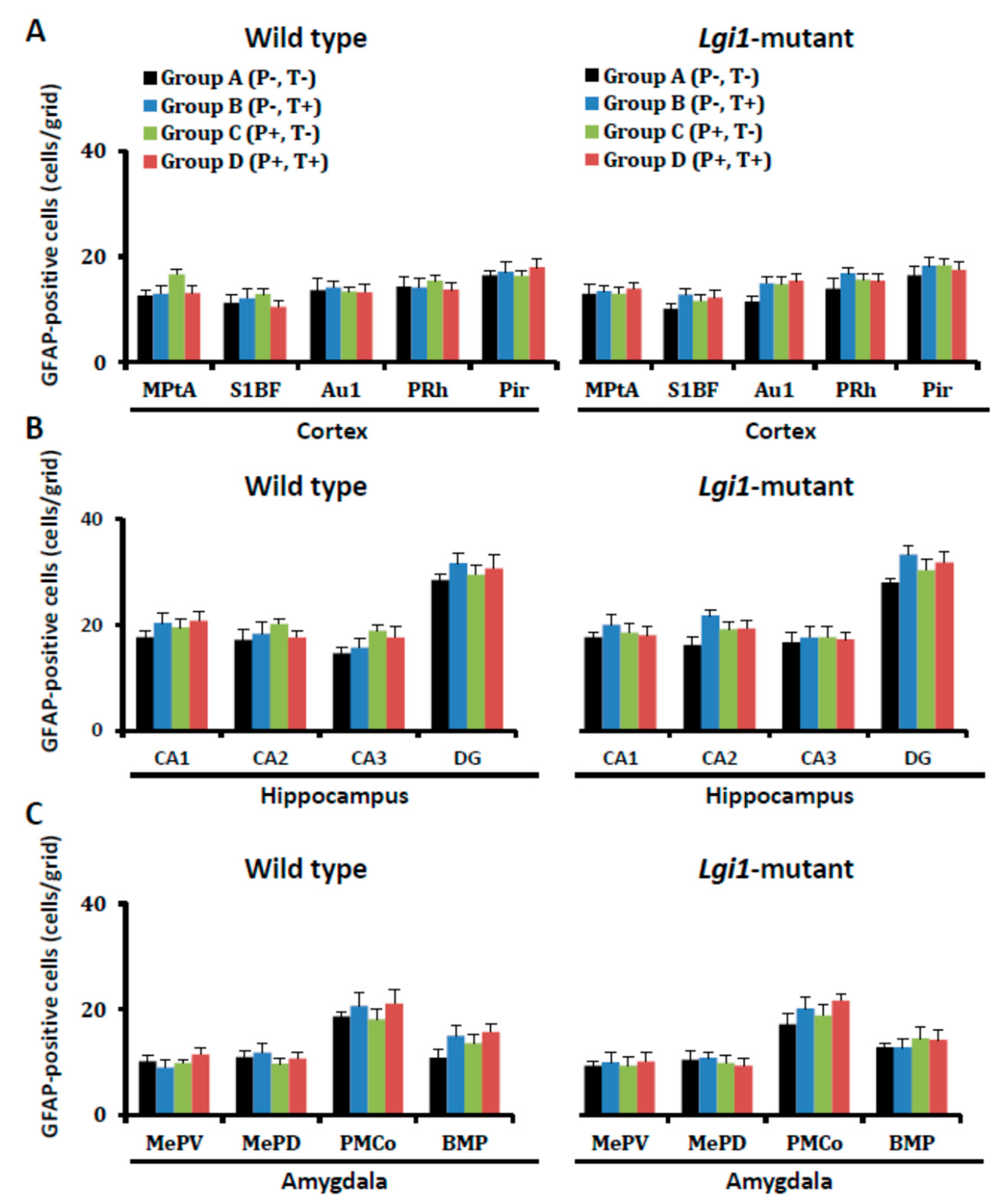 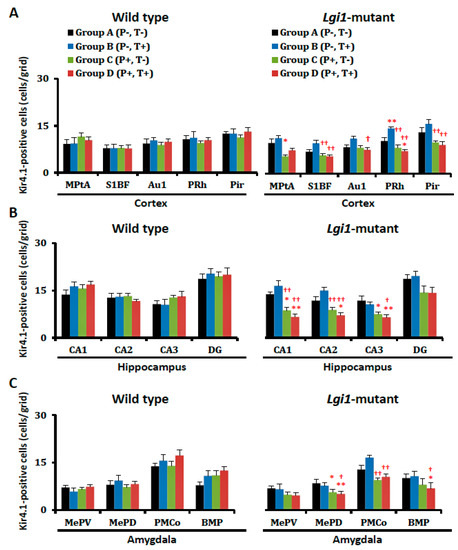 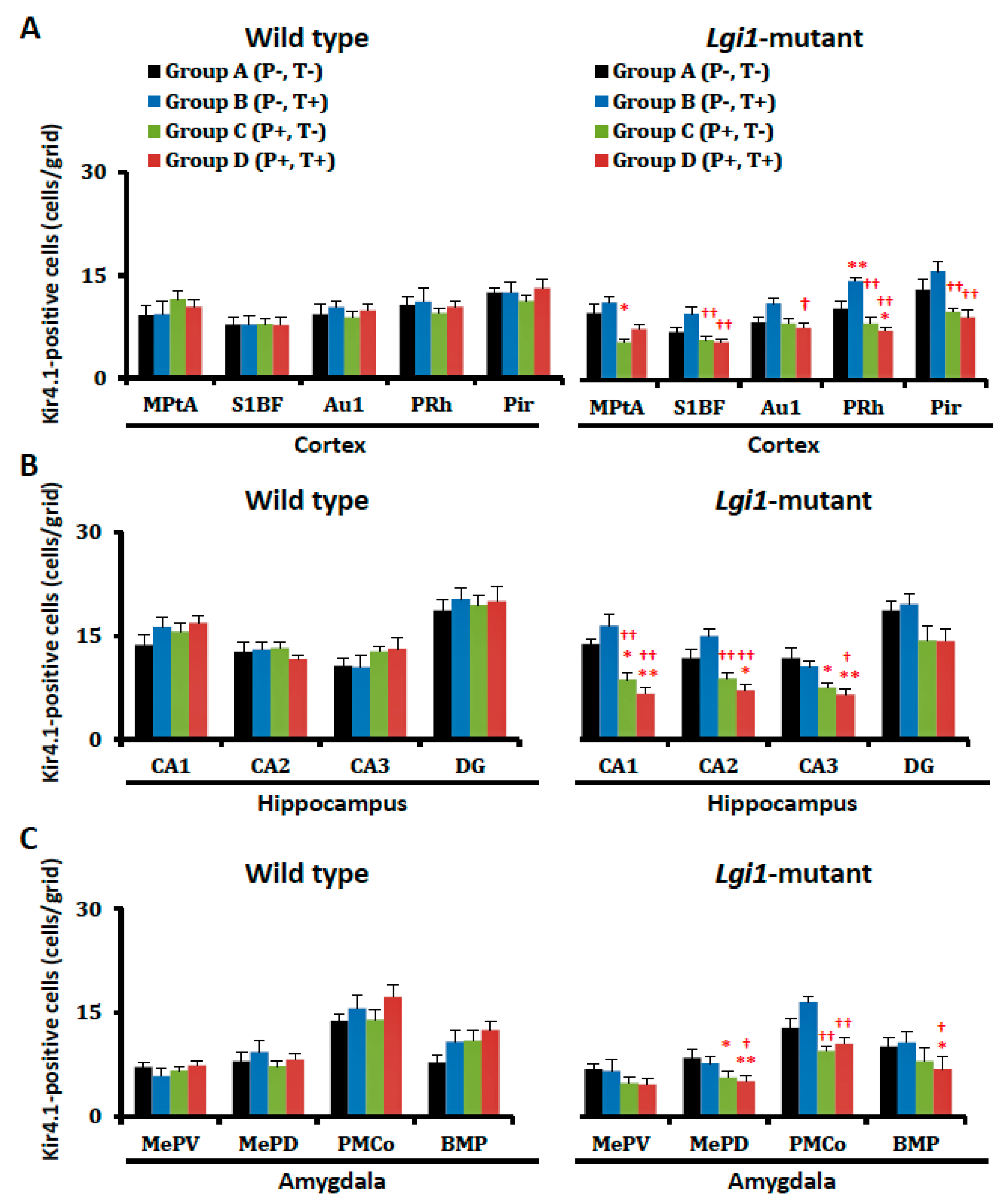 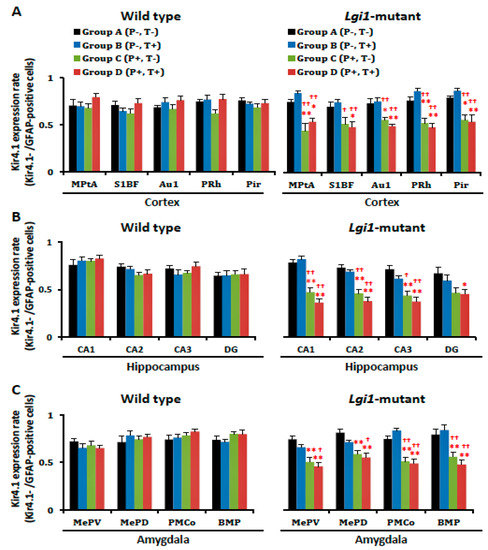 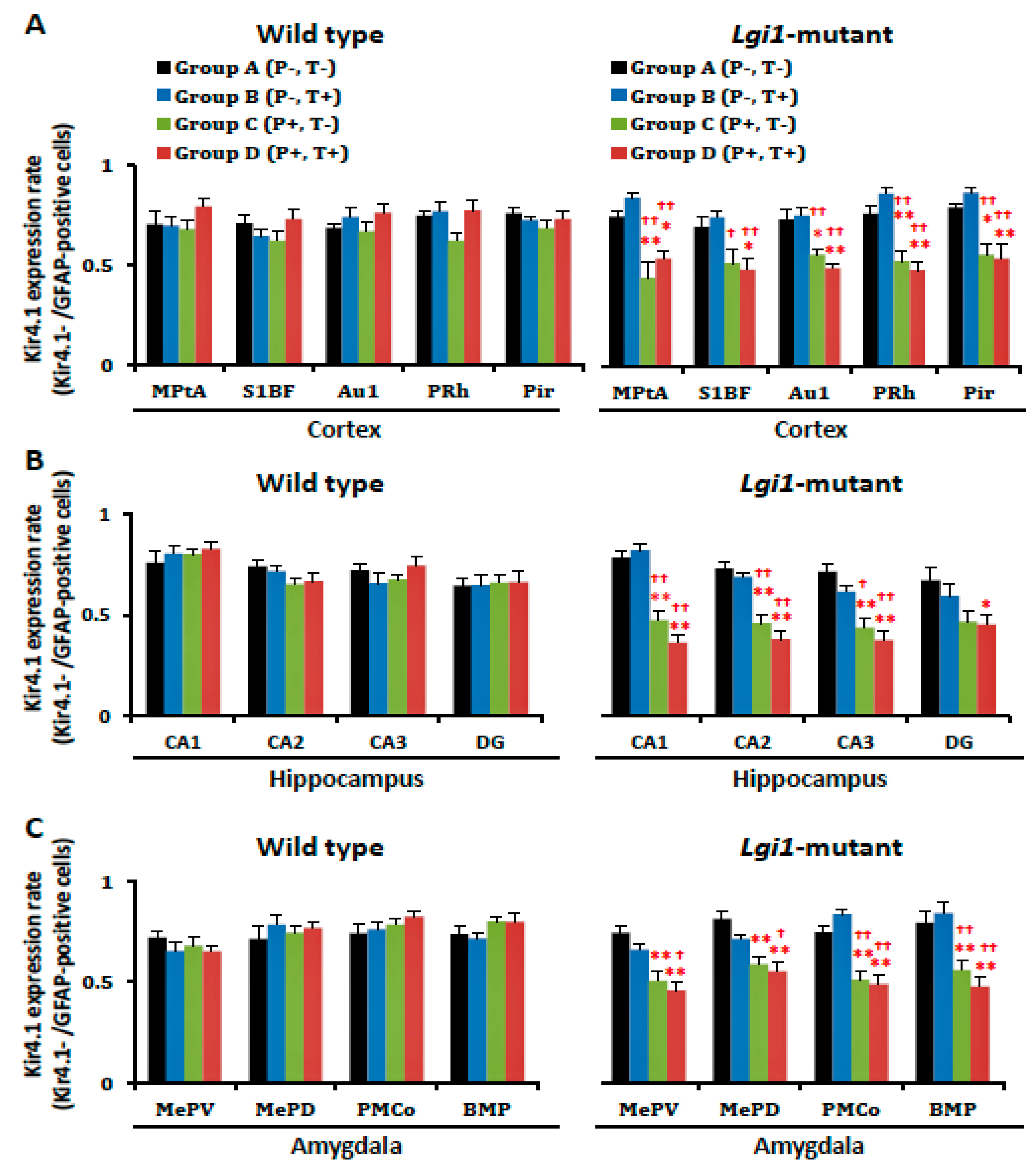 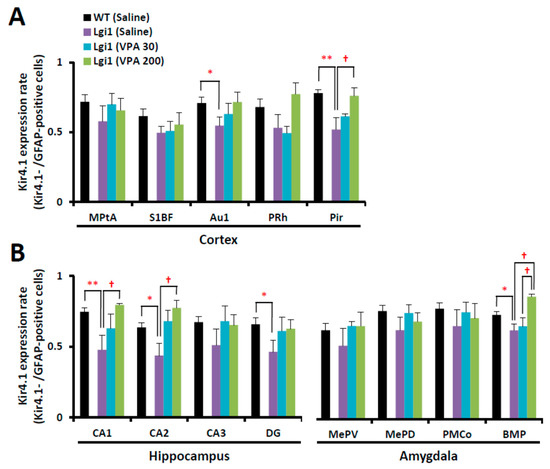 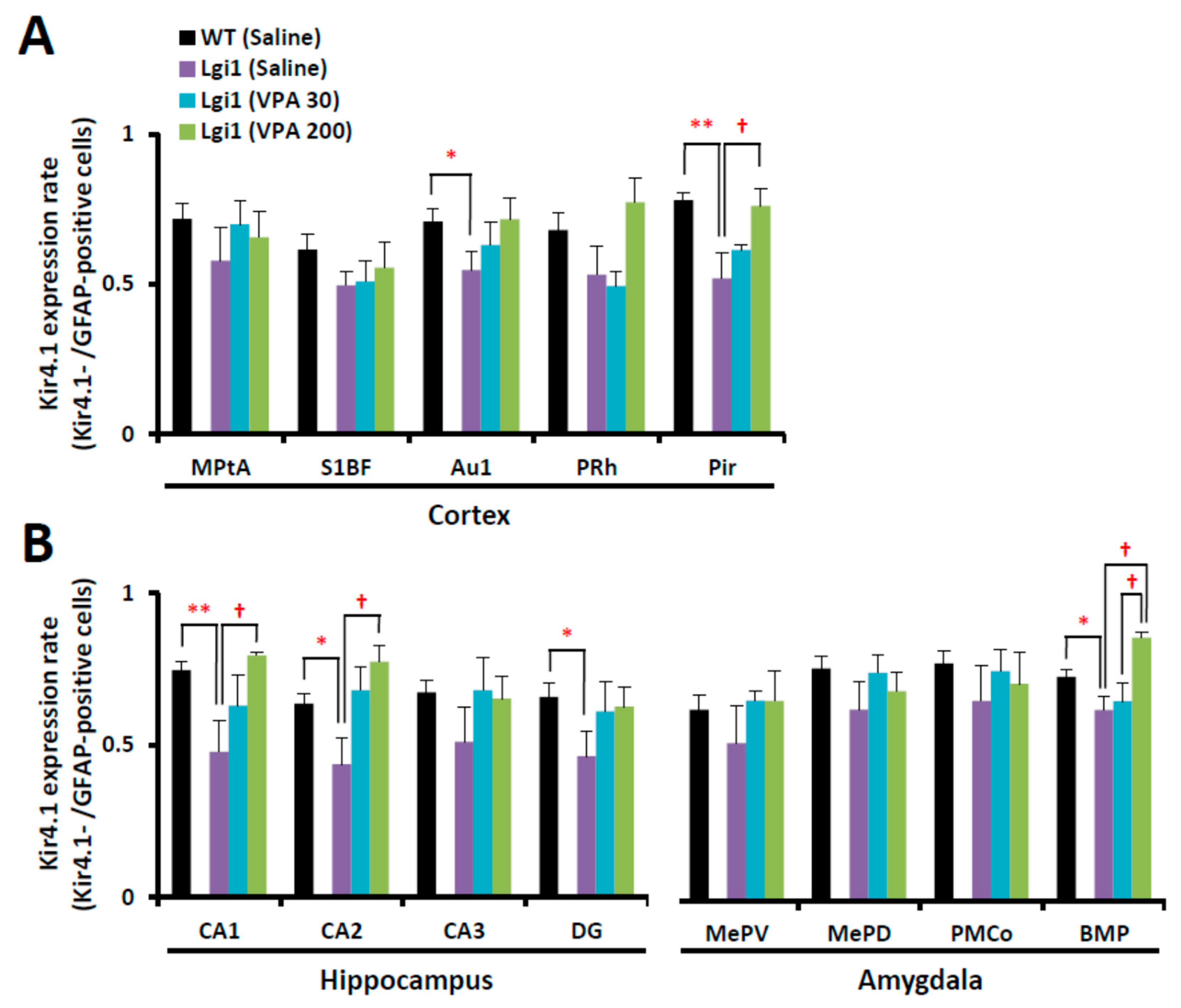