Obesity is a common problem worldwide, as it contributes to type 2 diabetes and other life style-related diseases in susceptible people with genetic predispositions. In addition to the easy access to calorie-dense foods and the predominance of lifestyles with little or no physical exercise in modern society, a common cause of obesity is the lack of effective drugs against obesity that are free of unacceptable side effects [1]. Exploring medications that are effective in treating obesity by suppressing food intake and/or enhancing energy expenditure is among the most important research goals in modern medicine.
Insulin, the pancreatic hormone secreted to maintain normal blood glucose levels, has been recognized to suppress food intake and weight gain when injected into cerebral ventricles [2]. More recently, insulin has been found to improve peripheral glucose metabolism in the brain [3], independent of its effects on food intake and body weight. Therefore, targeting insulin in the brain could be a valid approach for treating obesity and type 2 diabetes, provided that its functions in the brain remain intact. These beneficial effects are severely disturbed by excessive nutrition, the consumption of fatty foods, and obesity itself, a condition referred to as brain insulin resistance. Obesity induces brain insulin resistance, which blunts the suppressive action of insulin on food intake, thus inducing more severe obesity. In other words, a vicious cycle develops and persists between obesity and brain insulin resistance. Therefore, clarifying the mechanism by which brain insulin resistance occurs, and devising strategies for breaking this vicious cycle, are important for developing new medications for the effective treatment of obesity and type 2 diabetes.

While administering insulin as a nasal spray suppresses food intake and endogenous glucose production in normal-weight humans, these phenomena are lost in obese individuals [6,44]. Similarly, while nasal insulin suppresses hypothalamic blood flow in lean people, as demonstrated by functional magnetic resonance imaging, this suppression is blunted in obese individuals [35]. This observation of “brain insulin resistance” has been mirrored in rodent studies: ICV insulin does not suppress food intake in high-fat-diet (HFD)-fed rats [45], and even a single day of HFD abolishes the suppressive effects of hypothalamic insulin on hepatic glucose production [46]. These data show that both beneficial effects of central insulin are disturbed by obesity. An important area of research focuses on which part of the insulin transport and/or signaling pathway is blocked in the hypothalamus. Some studies have indicated that insulin delivery from the bloodstream to the CNS is disturbed by HFD feeding [12,13]. However, higher insulin concentrations—even in the cerebrospinal fluid (CSF) in obese individuals [47,48,49]—indicate the involvement of mechanisms other than disturbed insulin delivery to the CNS. Several studies have shown a decrease in tyrosine phosphorylation of IR and IRS [46,50], which can be partly explained by the increase in two tyrosine phosphatases, PTP-1B [51] and TCPTP [52,53], which are detailed below. However, only long-term, i.e., not short-term, HFD feeding has been shown to increase both phosphatases. Another mechanism underlying the decrease in the tyrosine phosphorylation of IRS-1 involves the serine phosphorylation of this protein, which inhibits the former. P70 S6 kinase [46] and JNK [54] are known to phosphorylate the serine residues of IRS-1, mediating the inhibition of insulin signal transduction. In our study, the suppression of hypothalamic PTEN in HFD-fed rats reversed insulin resistance without exerting effects on food intake [22], indicating that the HFD-induced blockage of hypothalamic insulin signals, such as IRS-1 serine phosphorylation, exist upstream from PI 3-kinase. Another blockage point exists downstream PI 3-kinase and impacts the regulation of food intake. Insulin activates the hypothalamic KATP channel in lean but not obese rats [55], showing that a site between PIP3 and the KATP channel may be blocked by HFD feeding. Such blockages impact the anorexic effect of hypothalamic insulin.
How rapidly does this hypothalamic insulin resistance occur? Hypothalamic insulin resistance caused by excessive nutrition occurs more rapidly than that in other insulin-sensitive tissues. Three days of HFD feeding sufficiently blunt the suppressive effects of insulin on food intake in rats [56]. We found that one day of HFD feeding was enough to blunt the suppressive effects of hypothalamic insulin on glucose production [46]. This one-day HFD also decreased tyrosine phosphorylation of IRS-1 and Akt phosphorylation in the hypothalamus, but not in the liver. Hepatic insulin resistance, which blunts endogenous glucose production, occurred within three days of initiating HFD feeding, while insulin resistance developed later in muscle and adipose tissues [57]. In contrast, hepatic insulin signaling, such as that involving PI 3-kinase activity, is somewhat upregulated by HFD feeding [58]. This controversy is explained by blunting the hypothalamic pathway, which potentially induces compensatory upregulation of hepatic insulin signaling [59].

5. Involvement of Phosphatases and SOCS3 in Hypothalamic Insulin Resistance

6. Involvement of the mTOR-S6 Kinase Pathway in Hypothalamic Insulin Resistance

Insulin has been detected in the CSF at concentrations 10–25% of those in the bloodstream. When plasma insulin increases, CSF insulin levels also rise [96]. While some brain insulin may be synthesized in the CNS [97], most is thought to come from the bloodstream [98]. Obesity increases CSF insulin levels in rodents [47], sheep [48], and humans [49]. However, the transport ratio of insulin from the periphery to the brain is blunted by HFD feeding [99,100]. Insulin-resistant individuals have a lower CSF/blood insulin concentration ratio [101]. Therefore, hypothalamic insulin resistance is partly explained by disrupted insulin transport into the brain. A portion of insulin in the brain is transported from the bloodstream into the brain by IR-expressing brain endothelial cells [14,38,96,98]. Insulin transport by brain endothelial cells reportedly decreases by HFD feeding [12], while insulin transport via receptor-mediated endothelial transcytosis remains controversial [96]. IR deletion in astrocytes blunted insulin transport into the brain, demonstrating that astrocytes are also involved in this transport [10,11].
In addition to neurons, glial and brain endothelial cells are also present in the hypothalamus, where research has been focused on determining which cell types are involved in insulin functions and hypothalamic insulin resistance [102,103]. IR expression levels are higher in neurons compared to glial cells. Among neuronal cells, AGRP-expressing neurons are the primary site in which insulin acts to suppress hepatic glucose production [33,79,104]. POMC-expressing cells are responsible for the central insulin functions of suppressing lipolysis and promoting lipogenesis in adipose tissue [33]. However, the role of POMC neurons in suppressing glucose production is controversial. POMC-specific genetic deletion of IR does not significantly affect the ability of insulin to suppress glucose production [33]. It was recently found that TCPTP expression is upregulated by fasting and downregulated by feeding, and this upregulation of TCPTP in POMC neurons during fasting masks the suppressive effects of insulin on glucose production [105]. When TCPTP expression in POMC neurons is suppressed by genetic deletion or feeding, the ability of insulin to suppress glucose production becomes apparent. Non-AGRP-expressing, neuropeptide Y (NPY)-expressing neurons have been recently shown to be responsible for the suppressive action of insulin on food intake [106].
Cultured hypothalamic neuronal cells are resistant to SFA-induced inflammation and insulin resistance [107], suggesting that SFA mainly affects non-neuronal cells, leading to neuronal insulin resistance. HFD feeding for one day is enough to induce hypothalamic gliosis, including both microgliosis and astrogliosis [108]. Microgliosis is induced by HFD feeding, but not obesity [63], and contributes to hypothalamic inflammation [62,109]. In contrast, astrogliosis is recognized as a protective reaction of the brain responding to acute excess nutrition [110]. The roles of inflammation, including that of the IKKβ/NFκB pathway in astrocytes, are controversial, because while one report has shown that the inhibition of NFκB in astrocytes enhanced food intake [111], another demonstrated astrocytic-mediated inhibition of NFκB to protect animals from HFD-induced obesity [112,113]. Astrocyte-specific IR deletion was shown to disturb glucose sensing, in addition to insulin and glucose transport from the bloodstream into the brain. The animal model used also showed impaired glucose tolerance and insulin resistance [11]. Brain endothelial cells are another cell type responsible for the transport of circulating insulin into the brain, where the uptake of insulin was downregulated after weeks of HFD feeding, showing an increase in NFκB binding activity [12]. Insulin transport by brain endothelial cells is not dependent of PI3k signaling, and the mechanism of the insulin resistance in brain endothelial cells induced by HFD feeding merits further study.
Long-term hypothalamic inflammation results in hypothalamic angiogenesis [114] and loss of POMC neurons. Moreover, long-term HFD induces expansion of the macrophage pool, which normally resides in the median eminence, to the arcuate nucleus of the hypothalamus. Inhibition of inducible nitric oxide synthase in these hypothalamic macrophages not only abrogates macrophage activation, but also improves glucose metabolism [115].

Given the current global pandemic of obesity and related diseases such as type 2 diabetes, and the lack of effective treatments, understanding the molecular mechanisms of hypothalamic insulin resistance is necessary for the development of safe and efficacious medications for the treatment of these metabolic disorders. Insulin nasal sprays effectively stimulate hypothalamic insulin signaling to suppress food intake as well as glucose production in lean but not obese men. Thus, the same approach might be useful for administering novel drugs that reverse or bypass the blockage point of insulin signaling as an obesity treatment, once the blockage mechanism and the responsible molecules have been fully elucidated. We now know that numerous heterogeneous cell types in the hypothalamus (POMC or AGRP neurons, other neurons, astrocytes, microglia, endothelial cells, macrophages in median eminence, etc.) are related to hypothalamic insulin resistance. Since commonly used drugs are not effective exclusively in one cell type, even one specific to the hypothalamus, when administered nasally they might not exert the desired “total effect” on heterogeneous hypothalamic cells. Thus, each candidate medication should be carefully studied and considered before its application to patients.

H.O. wrote this manuscript and prepared the figures.

This research was funded by the Ministry of Education, Culture, Sports, Science, and Technology of Japan, grant number 18K08502.

The author has no conflicts of interest to declare. 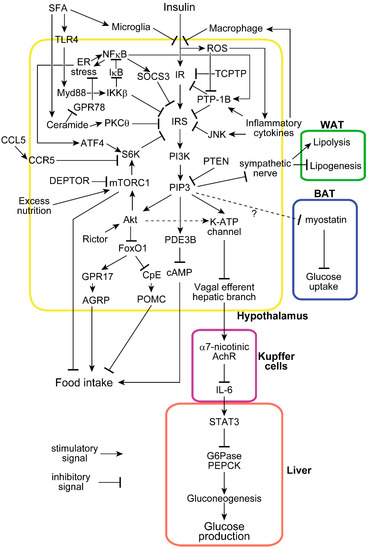 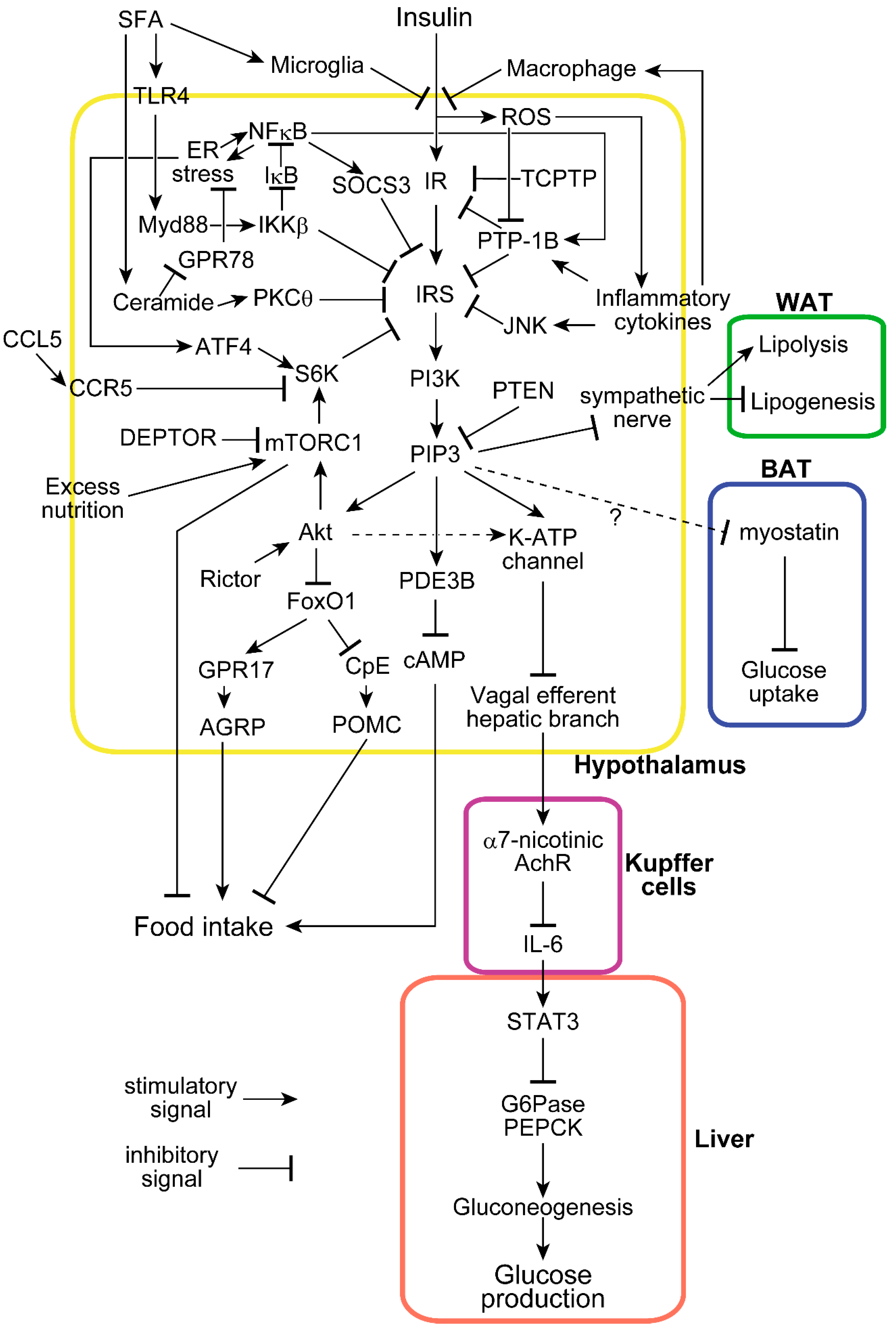 © 2019 by the author. Licensee MDPI, Basel, Switzerland. This article is an open access article distributed under the terms and conditions of the Creative Commons Attribution (CC BY) license (http://creativecommons.org/licenses/by/4.0/).
We use cookies on our website to ensure you get the best experience. Read more about our cookies here.
Accept
We have just recently launched a new version of our website. Help us to further improve by taking part in this short 5 minute survey here. here.
Never show this again