Effectiveness of Vitamin D Supplementation in the Management of Multiple Sclerosis: A Systematic Review

Parkinson’s disease (PD), a multifactorial movement disorder that involves progressive degeneration of the nigrostriatal system affecting the movement ability of the patient. Oxidative stress and neuroinflammation both are shown to be involved in the etiopathogenesis of PD. The aim of this study was to evaluate the therapeutic potential of thymol, a dietary monoterpene phenol in rotenone (ROT)-induced neurodegeneration in rats that precisely mimics PD in humans. Male Wistar rats were injected ROT at a dose of 2.5 mg/kg body weight for 4 weeks, to induce PD. Thymol was co-administered for 4 weeks at a dose of 50 mg/kg body weight, 30 min prior to ROT injection. The markers of dopaminergic neurodegeneration, oxidative stress and inflammation were estimated using biochemical assays, enzyme-linked immunosorbent assay, western blotting and immunocytochemistry. ROT challenge increased the oxidative stress markers, inflammatory enzymes and cytokines as well as caused significant damage to nigrostriatal dopaminergic system of the brain. Thymol treatment in ROT challenged rats appears to significantly attenuate dopaminergic neuronal loss, oxidative stress and inflammation. The present study showed protective effects of thymol in ROT-induced neurotoxicity and neurodegeneration mediated by preservation of endogenous antioxidant defense networks and attenuation of inflammatory mediators including cytokines and enzymes.
Keywords: neurodegeneration; oxidative injury; Parkinson’s disease; terpenes, rotenone; thymol neurodegeneration; oxidative injury; Parkinson’s disease; terpenes, rotenone; thymol

Parkinson’s disease (PD) is pathologically described by the continued loss of dopaminergic neuronal cells in the substantia nigra pars compacta (SNc), which results in motor impairments such as loss of motion, postural and gait instability, resting tremors, and muscle rigidity [1,2]. Accumulating evidence suggests that mitochondrial dysfunction, lipid peroxidation, brain aging, and genetic susceptibility, which often involve oxidative stress and neuroinflammatory changes, play a major part in the pathogenesis of PD [3,4,5]. Oxidative stress and inflammation are the two central pathways in microglial cells activation that lead to progressive neuronal degeneration and represent an important therapeutic target in PD [3,4,5,6,7]. The activation and release of proinflammatory cytokines, such as IL-1β, IL-6, and TNFα, along with free radical generation including reactive oxygen species (ROS) and inducible nitric oxide synthase (iNOS), has detrimental effects on the existence of dopaminergic neurons in the SNc [6,7].
To ensure cellular homeostasis, a balance between pro- and antioxidant systems is typically required. Hence, the restoration of the cellular antioxidant system using antioxidants is one of the emerging therapeutic strategies to protect susceptible dopaminergic neurons from oxidative stress and subsequent inflammation. The adverse effects of anti-inflammatory agents and the pro-oxidant action of the synthetic antioxidants are of concern in therapeutics. This concern shifted the focus of drug discovery to explore plant extracts and plant-derived phytochemicals that possess antioxidant and anti-inflammatory activities for their therapeutic and preventive benefits in PD [8,9]. Therefore, in recent years, the focus of pharmacological therapy has been on the development of novel nutraceutical-based plant-derived phytochemicals that possess high antioxidant and anti-inflammatory properties, with a lesser degree of cytotoxic effects [9].
Among numerous plant-derived dietary phytochemicals, thymol has received attention due to its favorable physicochemical, pharmacokinetic, and pharmacological properties [10]. Thymol, a dietary monoterpene is chemically known as 2-isopropyl-5-methylphenol and found predominantly in many edible or culinary plants such as Centipeda minima, Lippia multiflora, Nigella sativa, Ocimum gratissimum, Satureja hortensis, Satureja thymbra, Thymus spp. (Thymus vulgaris, Thymus pectinatus, Thymus zygis, and Thymus ciliates), Trachyspermum ammi and Zataria multiflora [10]. Thymol is catalogued as ‘Generally Recognized as Safe’ for use as a preservative and additive in food, beverages and cosmetic products, therefore it is considered to be safe for dietary use with minimal toxicity. Thymol exhibits potent pharmacological properties including antioxidant [11], anti-inflammatory [12], antimutagenic [13], analgesic [14], and anti-microbial [15] effects. It has been approved for use as a food additive and flavoring agent in cosmetics and food preparations. Its long-time dietary use, acceptable safety profile, and low toxicity have generated interest in evaluating its possible therapeutic use in neurodegenerative diseases. Therefore, in the current study we examined the neuroprotective efficacy and underlying mechanism of thymol in a rotenone (ROT)-induced rat model of neurodegeneration mimicking PD in humans. ROT, a plant-derived insecticide, inhibits mitochondrial complex I resulting in loss of ATP production, increase in oxidative stress, inflammation, prolonged glial cell activation, and nigrostriatal degeneration that mimics human PD [16,17,18,19]. The experimental models of ROT-induced neurodegeneration in rats, fruit fly or cell lines are popularly employed to screen and evaluate agents for their potential neuroprotective potential and therapeutic efficacy [20,21,22,23,24].

In order to induce PD in rats, ROT was injected intraperitoneally once daily for 4 weeks with a dosage of 2.5 mg/kg body weight. The doses and schedule of ROT used for PD induction in rats in the present study was similar to that previously described and published report with slight modifications [22,23,24]. Briefly, a stock solution of 50× ROT was prepared in dimethyl sulfoxide and was used at a concentration of 2.5 mg/mL after dilution of stock in sunflower oil as vehicle. Thymol was prepared after dilution in sunflower oil at a concentration of 50 mg/2mL. The dose of thymol was selected based on previous studies [44,45] and was used at 50 mg/kg body weight through intraperitoneal injection 30 min prior to ROT challenge, once in a daily for a total of 4 weeks. The animals injected with same amount of oil only (vehicle) were designated as controls.
The animals were grouped in the following four categories as independent experimental groups of eight rats each. Group I: rats received vehicle injections, designated as normal control group (CONT). Group II: rats received rotenone and vehicle injections, designated as ROT group (ROT). Group III: rats received thymol 30 min prior to rotenone and vehicle injections, designated as thymol-treated group (ROT + Thymol). Group IV: rats received thymol injections alone, designated as thymol group (Thymol).

Animals of all the experimental groups were euthanized 48 h after the final administration of thymol or ROT to ensure a sufficient washout period. Prior to their sacrifice, animals received intraperitoneal injections of anesthesia pentobarbital (40 mg/kg body weight) followed by cardiac perfusion using phosphate-buffered saline (0.01 M, pH 7.4) to wash out the blood. Following perfusion, the brain was removed quickly, and the two hemispheres were separated. The midbrain and the striatum region were dissected out on ice from one of the hemisphere and the tissue was snap frozen under liquid nitrogen until further use. The other hemisphere was fixed with 4% paraformaldehyde solution for 48 h and subsequently exchanged with 10% sucrose solution three times a day for three consecutive days at 4 °C prior to cryostat sectioning.

Tissue samples (mid brain) were prepared after lysis of the frozen midbrain tissues in KCL buffer supplemented with cocktail of protease and phosphatase inhibitor using a hand held tissue homogenizer separately for each group. The homogenate of each sample was centrifuged at 14,000 g for 20 min at 4 °C to get the post-mitochondrial supernatant for the quantification of endogenous enzymatic and no-enzymatic antioxidants, markers of lipid peroxidation, and levels of proinflammatory cytokines employing spectrophotometric assessment and enzyme-linked immunosorbent assay (ELISA).

4.6. Assessment of Lipid Peroxidation and Glutathione

The activities of endogenous antioxidant enzymes such as superoxide dismutase (SOD) and catalase (CAT) were estimated following the protocols prescribed in manufacturer’s kits (Cayman Chemicals Company, Ann Arbor, MI, USA). The activities of SOD and CAT are expressed as U/mg protein, and nmol/min/mg protein, respectively.

ELISA assays were carried out in order to determine the quantity of proinflammatory cytokines such as interleukin-1β (IL-1β), interleukin-6 (IL-6), and tumor necrosis factor-alpha (TNF-α) in midbrain tissues, following the manufacturer’s protocol provided with the kits (R&D Systems, Minneapolis, MN, USA). The data are presented as pg/mg protein.

The immunohistochemical staining for TH was performed as published before [23,24]. Briefly, 14-μm thick coronal brain sections were sliced out at the level of the striatum and SNc using a cryostat (Leica, Wetzlar, Germany) and TH+ neurons in the SNc and TH-ir fibers in the striatum were evaluated following a method as described previously [23,24]. The loss of TH+ neurons in the SNc area after ROT administration was determined by enumerating the TH+ neurons at three different levels (section) (−4.8, −5.04, and −5.28 mm from the bregma) of the SNc region from each rat. A total three sections of each level and three rats per group were included in the analysis and the average count for each group is represented as a percentage. Therefore, in total, nine sections per group were analyzed for TH+ neurons. The differences in the optical density of TH-ir dopaminergic fibers in the striatum was measured using Image J software (NIH, Bethesda, MD, USA) in three different fields of each section (three sections/rat n = 3) with equal areas (adjacent to 0.3 mm from the bregma). An average of the three sections was calculated and is presented as a percentage compared to the control group. As background, the optical density was measured from the overlying cortex and the values obtained were subtracted from the values obtained for striatum. An investigator who was masked to the experimental groups and treatment was assigned to perform the enumeration of TH+ neurons and measurement of the optical density of the TH-ir fibers.

4.10. Immunofluorescence Staining of GFAP and Iba-1

4.11. Determination of Activated Astrocytes and Microglia in the Striatum

The tissues dissected from striatum of each experimental group were homogenized in 1X RIPA buffer supplemented with cocktail inhibitor of protease and phosphatase. The crude lysate was centrifuged at 14,000 rpm for 20 min in a refrigerated micro-centrifuge. A total of 35 μg of protein from each tissue sample was electrophoresed on a 10% SDS-polyacrylamide gel following a protocol as published before [23,24]. The blots were quantitated using image J software (NIH, Bethesda, USA).

The results are presented as the mean ± SEM. Statistical analysis were made using one-way analysis of variance (ANOVA) followed by Tukey’s test to calculate the statistical significance of differences between various groups including immunohistochemical cell/fiber count data. The data with p-values < 0.05 were considered significant.

Taken altogether, the present study clearly demonstrates that thymol provides protection against ROT-induced dopaminergic neurodegeneration, and the neuroprotective effects are attributed to the antioxidant and anti-inflammatory properties of thymol. Based on the findings of this study, it can be suggested that thymol or the herbs rich in thymol could be useful in the prevention of neurodegeneration in PD. Nonetheless, the translation of beneficial effects in humans and identification of the exact molecular mechanisms require further investigation.

The authors declare no conflict of interest. The funders have no role in study design, analysis and report writing. 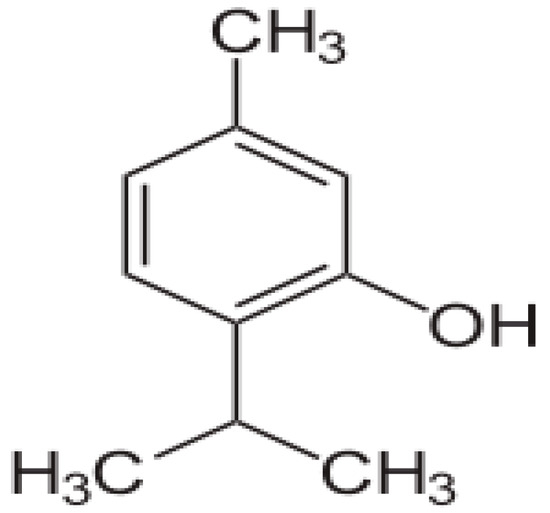 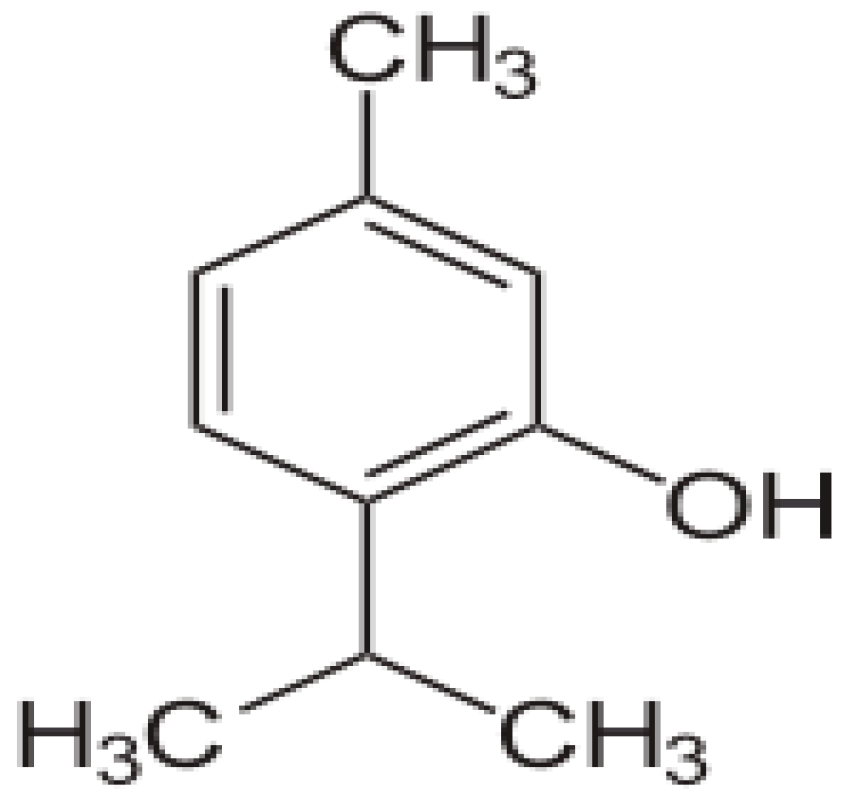 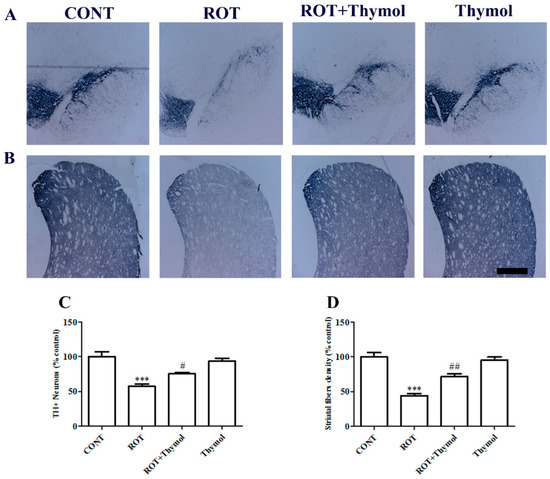 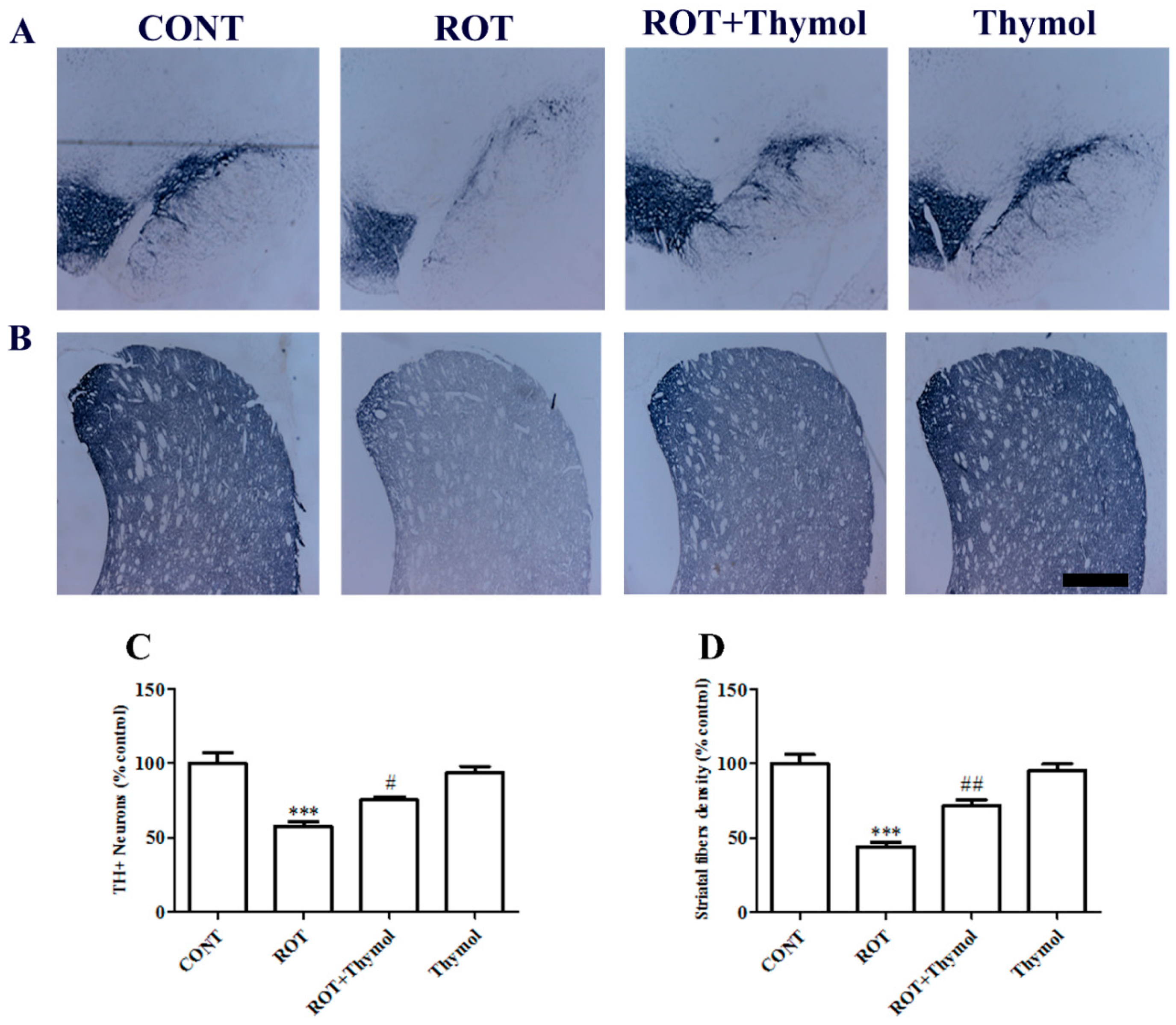 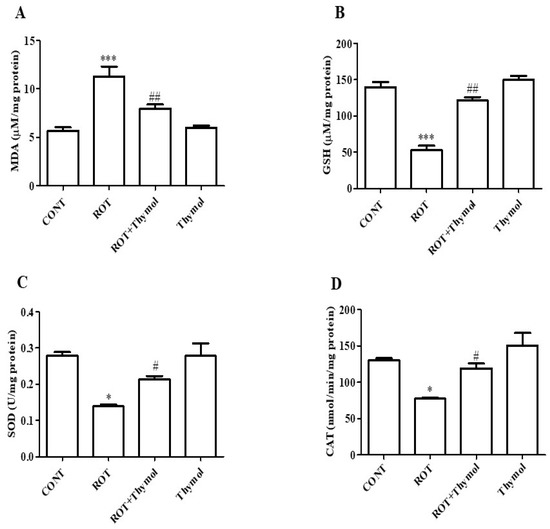 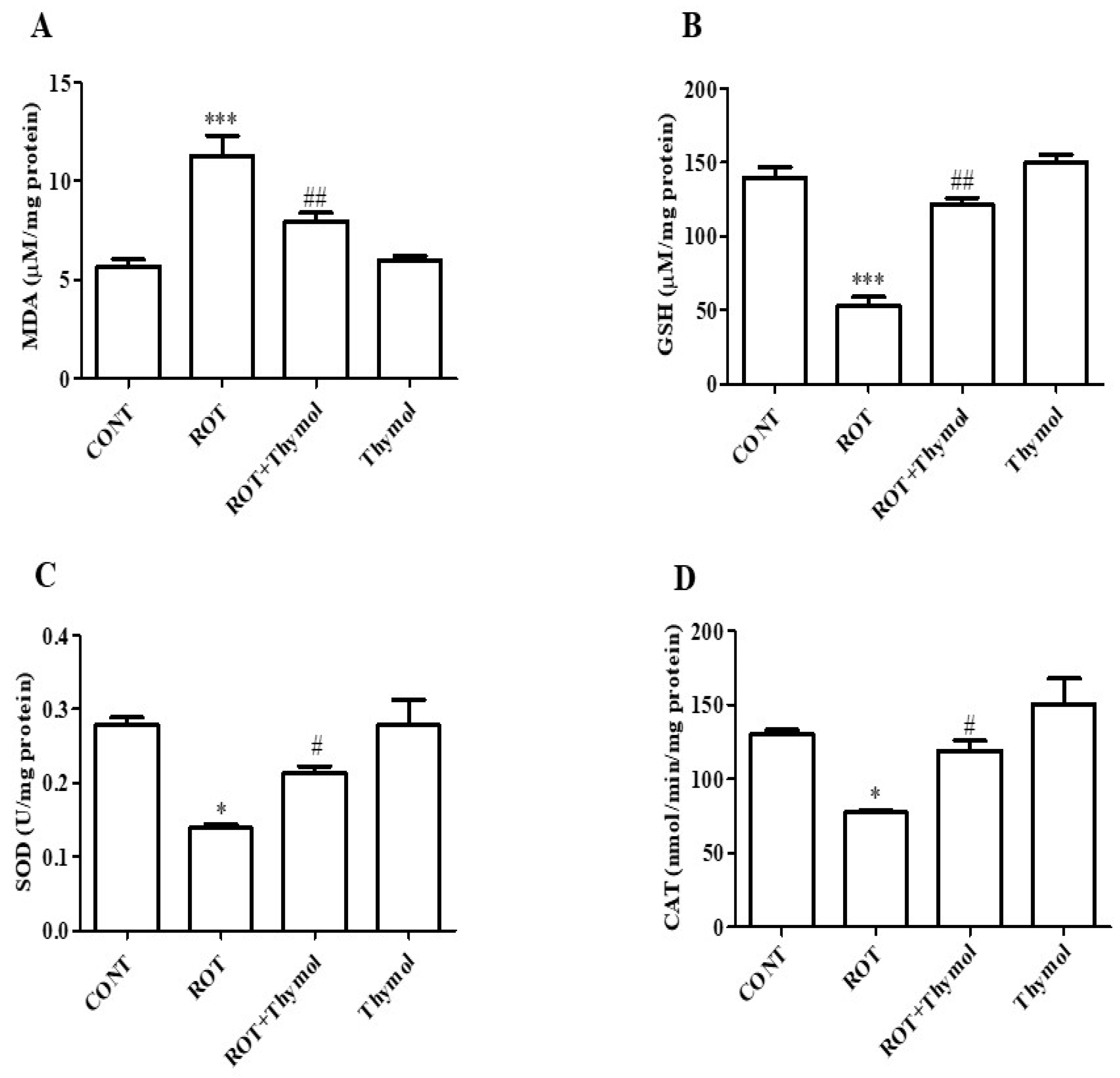 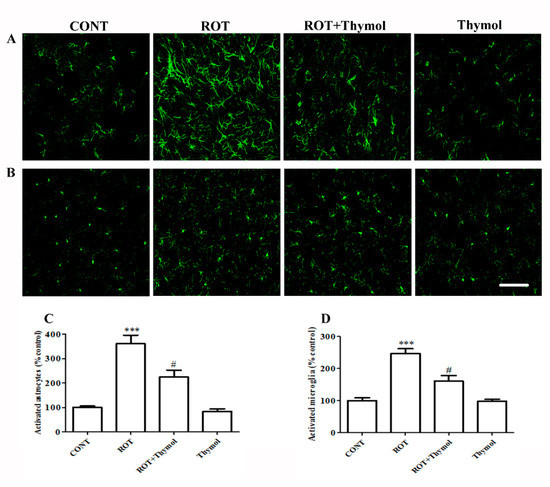 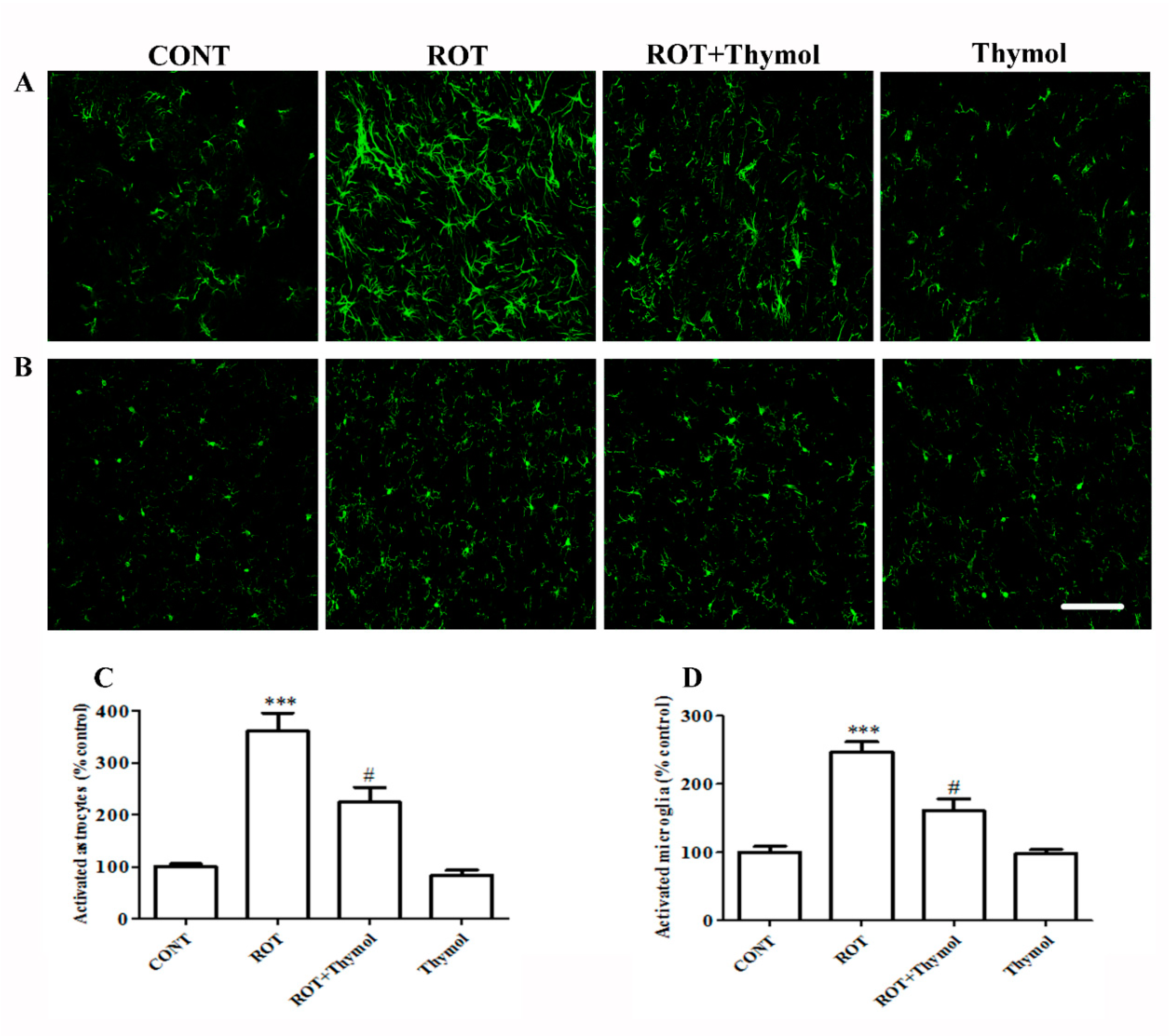 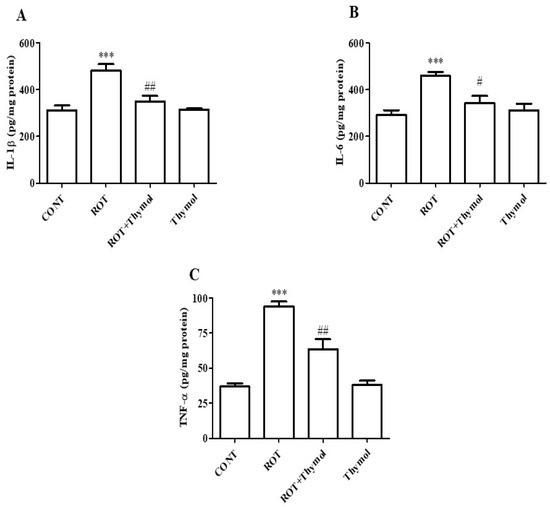 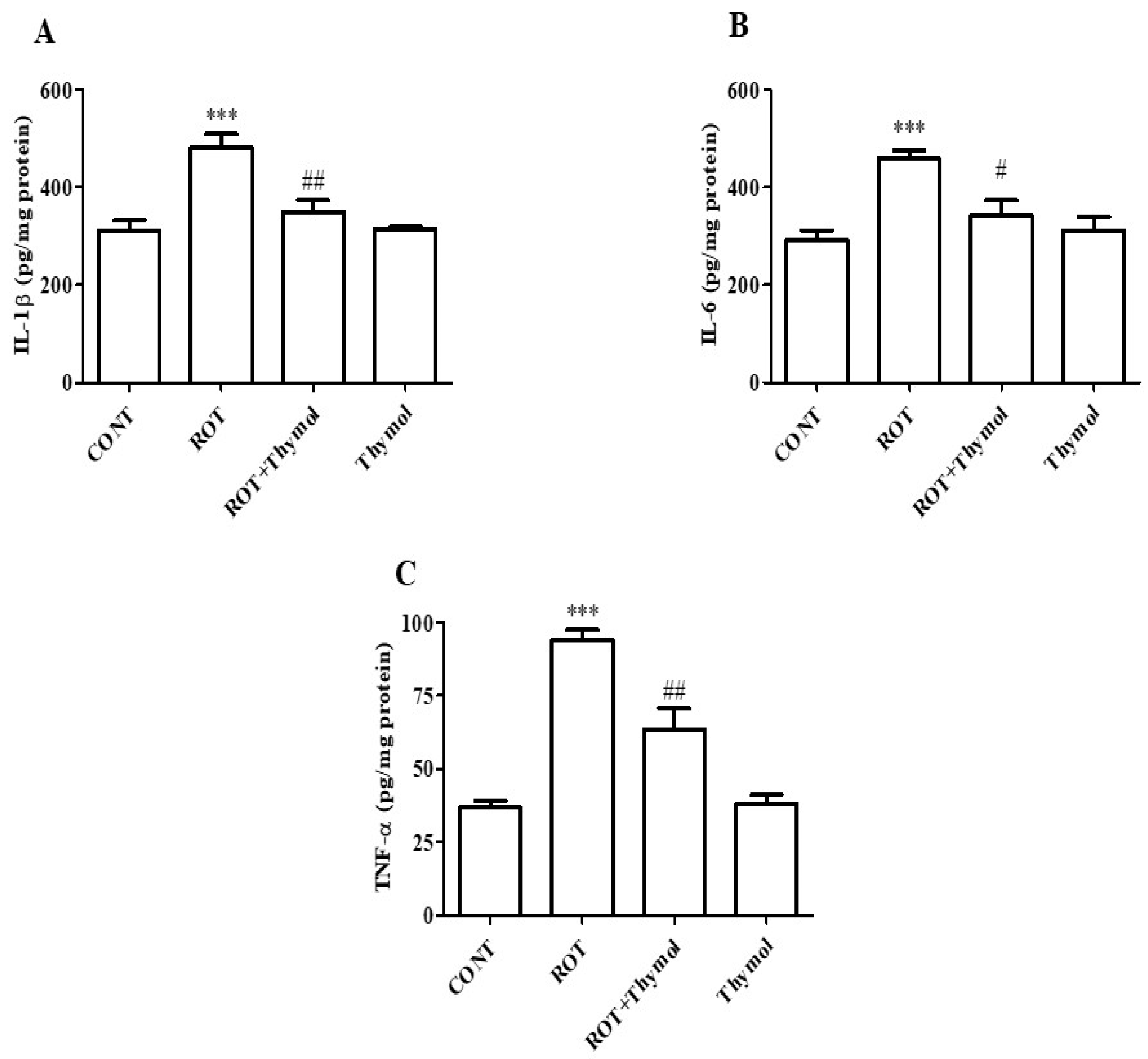 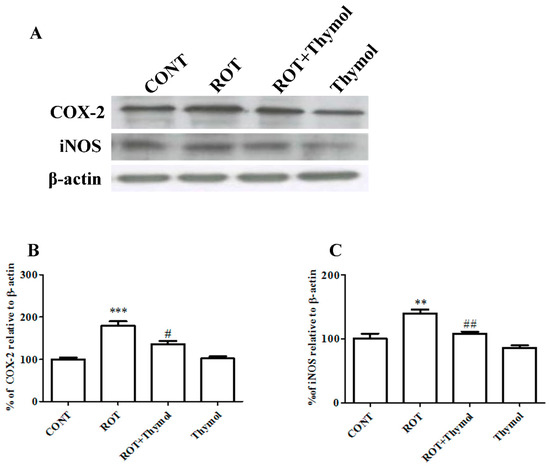 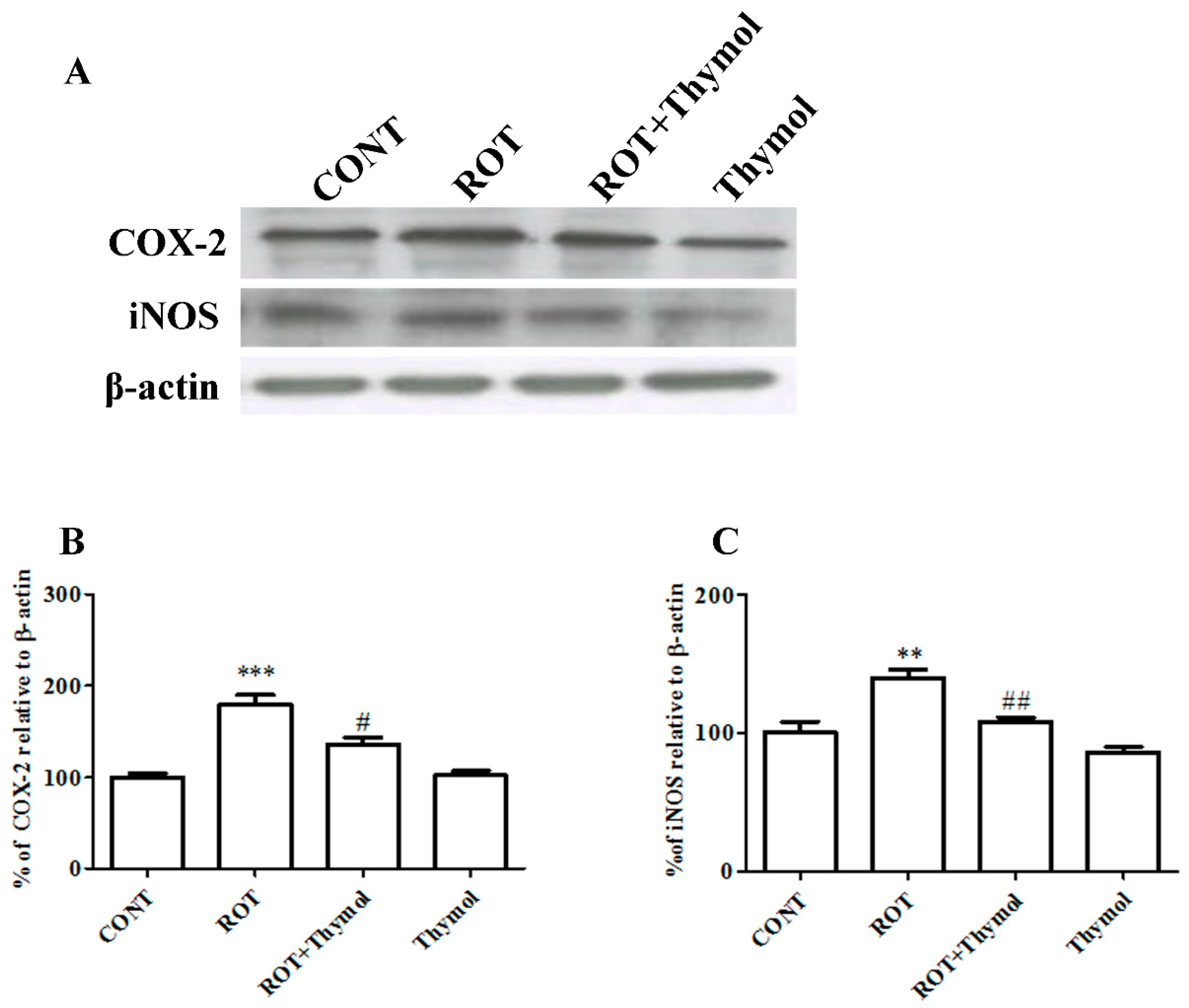