Extracellular Vesicle as a Source of Alzheimer’s Biomarkers: Opportunities and Challenges
Previous Article in Special Issue

Identification and Expression Profiling of the Regulator of Chromosome Condensation 1 (RCC1) Gene Family in Gossypium Hirsutum L. under Abiotic Stress and Hormone Treatments

The regulator of chromosome condensation 1 (RCC1) is the nucleotide exchange factor for a GTPase called the Ras-related nuclear protein, and it is important for nucleo-plasmic transport, mitosis, nuclear membrane assembly, and control of chromatin agglutination during the S phase of mitosis in animals. In plants, RCC1 molecules act mainly as regulating factors for a series of downstream genes during biological processes such as the ultraviolet-B radiation (UV-B) response and cold tolerance. In this study, 56 genes were identified in upland cotton by searching the associated reference genomes. The genes were found to be unevenly distributed on 26 chromosomes, except A06, A12, D03, and D12. Phylogenetic analysis by maximum-likelihood revealed that the genes were divided into five subgroups. The RCC1 genes within the same group shared similar exon/intron patterns and conserved motifs in their encoded proteins. Most genes of the RCC1 family are expressed differently under various hormone treatments and are negatively controlled by salt stress. Gh_A05G3028 and Gh_D10G2310, which encode two proteins located in the nucleus, were strongly induced under salt treatment, while mutants of their homoeologous gene (UVR8) in Arabidopsis and VIGS (virus induced gene silencing) lines of the two genes above in G. hirsutum exhibited a salt-sensitive phenotype indicating their potential role in salt resistance in cotton. These results provide valuable reference data for further study of RCC1 genes in cotton. View Full-Text
Keywords: cotton; RCC1; gene family; gene expression; salt tolerance cotton; RCC1; gene family; gene expression; salt tolerance
►▼ Show Figures 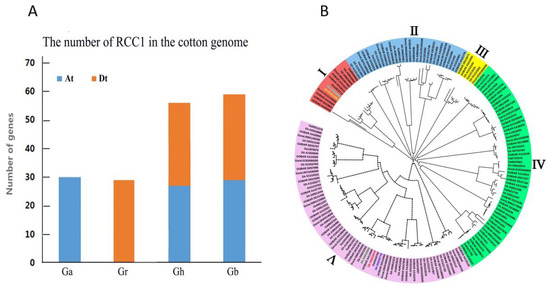