Characterization of the Chloroplast Genome of Trentepohlia odorata (Trentepohliales, Chlorophyta), and Discussion of its Taxonomy

In this study, a surface chemical-modified rice husk biochar with abundant amino groups and disulfide bonds for the removal of cadmium was prepared using cystamine dihydrochloride as a modification ligand and glutaraldehyde as a crosslinker. The biochars were characterized by Fourier transform infrared spectrometry (FTIR), elemental analysis, scanning electron microscopy (SEM), X-ray photoelectron spectroscopy (XPS), thermogravimetry analysis (TGA), and nitrogen sorption (BET) before and after modification. The adsorption properties of the modified biochars for Cd (II) were investigated in detail via adsorption isotherm models, adsorption kinetics models, and selective adsorption experiments. The surfaces of the cystamine-modified biochars with granular nanopolymers of sufficient functional groups of primary amine and disulfide linkage rendered the biochar surface more conducive to electrostatic attraction and surface complexation. The theoretical maximum adsorption capacity of the modified biochars (81.02 mg g−1) was almost 10-fold greater than that of the raw biochars (8.347 mg g−1) for Cd (II). Besides, the cystamine-modified biochars had a better affinity for Cd (II) compared to other heavy metals (Zn, As, Cd, Co, Ni, Cr), showing six-fold greater affinity for Cd (II) than Zn2+. The results of this study indicate that the modification of biochars derived from rice husks shows great potential in the removal of Cd (II) from contaminated water. View Full-Text
Keywords: biochar; modification; cadmium; cystamine; multisite biochar; modification; cadmium; cystamine; multisite
►▼ Show Figures 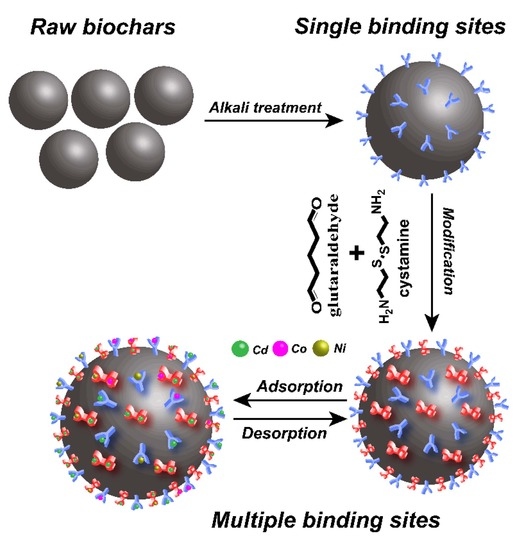