Pepper (Capsicum annuum L.) is a globally important horticultural crop. Use of the genic male-sterile (GMS) line enables efficient commercial hybrid pepper seed production. However, the mechanisms of pepper GMS functioning remain unclear. In this study, we used proteomic and transcriptomic analysis to identify proteins and genes related to genic male sterility. A total of 764 differentially expressed proteins (DEPs) and 1069 differentially expressed genes (DEGs) were identified in the proteomic and transcriptomic level respectively, and 52 genes (hereafter “cor-DEGs-DEPs” genes) were detected at both levels. Gene ontology (GO) and Kyoto Encyclopedia of Genes and Genomes (KEGG) analysis identified 13 DEPs and 14 DEGs involved in tapetum and pollen development. Among the 13 DEPs identified, eight were involved in pollen exine formation, and they were all up-regulated in the fertile line 16C1369B. For the 14 DEGs identified, ABORTED MICROSPORES (AMS) and DEFECTIVE IN TAPETAL DEVELOPMENT AND FUNCTION1 (TDF1) were involved in tapetum development, and both are possibly regulated by Msc-1. All of these genes were detected and confirmed by qRT-PCR. The presence of these genes suggests their possible role in tapetum and pollen exine formation in GMS pepper. Most key genes and transcription factors involved in these processes were down-regulated in the sterile line 16C1369A. This study provides a better understanding of GMS (msc-1) molecular functioning in pepper. View Full-Text
Keywords: pepper; proteomic analysis; transcriptomic analysis; genic male sterility; tapetum pepper; proteomic analysis; transcriptomic analysis; genic male sterility; tapetum
►▼ Show Figures 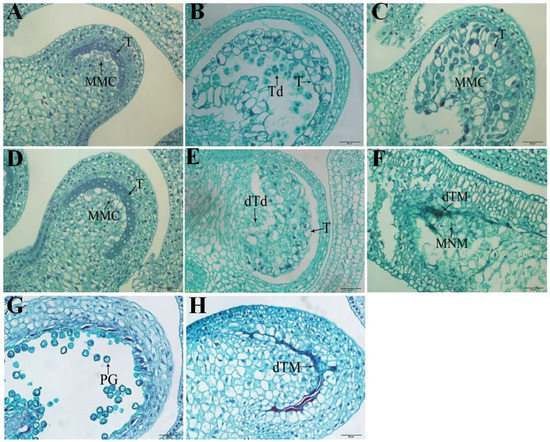