Glutamate Receptors and Glioblastoma Multiforme: An Old “Route” for New Perspectives
Next Article in Special Issue

Hydrodynamic Behavior of the Intrinsically Disordered Potyvirus Protein VPg, of the Translation Initiation Factor eIF4E and of their Binary Complex
Previous Article in Special Issue

The bone marrow (BM) microenvironment plays a crucial role in the maintenance and regeneration of hematopoietic stem (HSC) and progenitor cells (HSPC). In particular, the vascular niche is responsible for regulating HSC maintenance, differentiation, and migration of cells in and out of the BM. Damage to this niche upon exposure to ionizing radiation, whether accidental or as a result of therapy, can contribute to delays in HSC recovery and/or function. The ability of BM derived-endothelial cells (BMEC) to alter and/or protect HSPC after exposure to ionizing radiation was investigated. Our data show that exposure of BMEC to ionizing radiation resulted in alterations in Akt signaling, increased expression of PARP-1, IL6, and MCP-1, and decreased expression of MMP1 and MMP9. In addition, global analysis of gene expression of HSC and BMEC in response to mixed neutron/gamma field (MF) radiation identified 60 genes whose expression was altered after radiation in both cell types, suggesting that a subset of genes is commonly affected by this type of radiation. Focused gene analysis by RT-PCR revealed two categories of BMEC alterations: (a) a subset of genes whose expression was altered in response to radiation, with no additional effect observed during coculture with HSPC, and (b) a subset of genes upregulated in response to radiation, and altered when cocultured with HSPC. Coculture of BMEC with CD34+ HSPC induced HSPC proliferation, and improved BM function after MF radiation. Nonirradiated HSPC exhibited reduced CD34 expression over time, but when irradiated, they maintained higher CD34 expression. Nonirradiated HSPC cocultured with nonirradiated BMEC expressed lower levels of CD34 expression compared to nonirradiated alone. These data characterize the role of each cell type in response to MF radiation and demonstrate the interdependence of each cell’s response to ionizing radiation. The identified genes modulated by radiation and coculture provide guidance for future experiments to test hypotheses concerning specific factors mediating the beneficial effects of BMEC on HSPC. This information will prove useful in the search for medical countermeasures to radiation-induced hematopoietic injury. View Full-Text
►▼ Show Figures 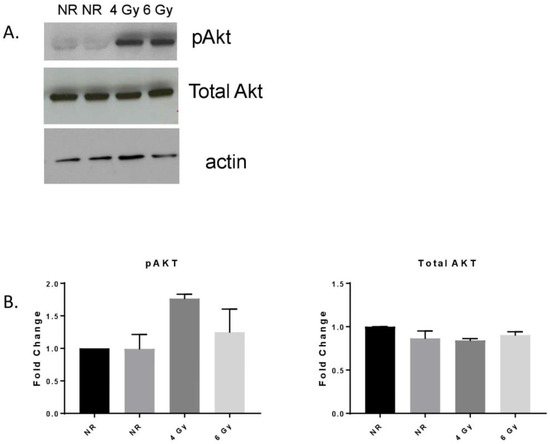