In humans, Zika virus and viral RNA have been detected in semen up to 2.2 months and 6 months post infection (pi), respectively. Although the contribution of sexual transmission to the spread of ZIKV is too low to sustain an outbreak, it can increase the risk of infection and the epidemic size as well as prolong the duration of an outbreak. In this study, we explored the potential of antivirals to serve as an effective strategy to prevent sexual transmission. Male AG129 mice infected with a ZIKV isolate from Suriname were treated with the nucleoside analog, 7-deaza-2′-C-methyladenosine (7DMA), that was previously shown to be efficacious in reducing ZIKV viremia and delaying ZIKV-induced disease in mice. Following treatment, viral RNA and infectious virus titers were consistently reduced in the male reproductive organs compared to vehicle-treated mice. This reduction of ZIKV loads in the testis was confirmed by the detection of lower levels of ZIKV antigens. Our data illustrate the value of this mouse model to validate the efficacy of new potential ZIKV drugs at the level of the male reproductive system. View Full-Text
Keywords: antivirals; sexual transmission; Zika virus antivirals; sexual transmission; Zika virus
►▼ Show Figures 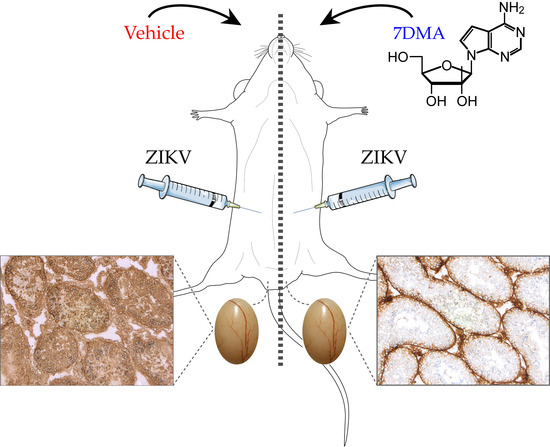