Immunoepigenetics Combination Therapies: An Overview of the Role of HDACs in Cancer Immunotherapy
Previous Article in Special Issue

Port wine stain (PWS) is a congenital vascular malformation involving human skin. Approximately 15–20% of children a facial PWS involving the ophthalmic (V1) trigeminal dermatome are at risk for Sturge Weber syndrome (SWS), a neurocutaneous disorder with vascular malformations in the cerebral cortex on the same side of the facial PWS lesions. Recently, evidence has surfaced that advanced our understanding of the pathogenesis of PWS/SWS, including discoveries of somatic genetic mutations (GNAQ, PI3K), MAPK and PI3K aberrant activations, and molecular phenotypes of PWS endothelial cells. In this review, we summarize current knowledge on the etiology and pathology of PWS/SWS based on evidence that the activation of MAPK and/or PI3K contributes to the malformations, as well as potential futuristic treatment approaches targeting these aberrantly dysregulated signaling pathways. Current data support that: (1) PWS is a multifactorial malformation involving the entire physiological structure of human skin; (2) PWS should be pathoanatomically re-defined as “a malformation resulting from differentiation-impaired endothelial cells with a progressive dilatation of immature venule-like vasculatures”; (3) dysregulation of vascular MAPK and/or PI3K signaling during human embryonic development plays a part in the pathogenesis and progression of PWS/SWS; and (4) sporadic low frequency somatic mutations, such as GNAQ, PI3K, work as team players but not as a lone wolf, contributing to the development of vascular phenotypes. We also address many crucial questions yet to be answered in the future research investigations. View Full-Text
Keywords: Port wine stain; Sturge Weber syndrome; congenital vascular malformations; MAPK; somatic mutation; laser treatment Port wine stain; Sturge Weber syndrome; congenital vascular malformations; MAPK; somatic mutation; laser treatment
►▼ Show Figures 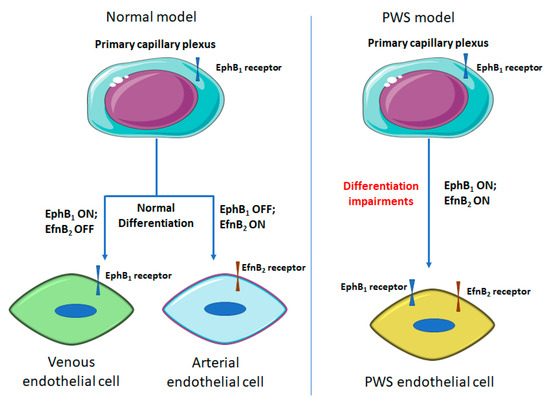