Deregulation of receptor tyrosine kinase (RTK)-signaling is frequently observed in many human malignancies, making activated RTKs the promising therapeutic targets. In particular, activated RTK-signaling has a strong impact on tumor resistance to various DNA damaging agents, e.g., ionizing radiation and chemotherapeutic drugs. We showed recently that fibroblast growth factor receptor (FGFR)-signaling might be hyperactivated in imatinib (IM)-resistant gastrointestinal stromal tumors (GIST) and inhibition of this pathway sensitized tumor cells to the low doses of chemotherapeutic agents, such as topoisomerase II inhibitors. Here, we report that inhibition of FGFR-signaling in GISTs attenuates the repair of DNA double-strand breaks (DSBs), which was evidenced by the delay in γ-H2AX decline after doxorubicin (Dox)-induced DNA damage. A single-cell gel electrophoresis (Comet assay) data showed an increase of tail moment in Dox-treated GIST cells cultured in presence of BGJ398, a selective FGFR1-4 inhibitor, thereby revealing the attenuated DNA repair. By utilizing GFP-based reporter constructs to assess the efficiency of DSBs repair via homologous recombination (HR) and non-homologous end-joining (NHEJ), we found for the first time that FGFR inhibition in GISTs attenuated the homology-mediated DNA repair. Of note, FGFR inhibition/depletion did not reduce the number of BrdU and phospho-RPA foci in Dox-treated cells, suggesting that inhibition of FGFR-signaling has no impact on the processing of DSBs. In contrast, the number of Dox-induced Rad51 foci were decreased when FGFR2-mediated signaling was interrupted/inhibited by siRNA FGFR2 or BGJ398. Moreover, Rad51 and -H2AX foci were mislocalized in FGFR-inhibited GIST and the amount of Rad51 was substantially decreased in -H2AX-immunoprecipitated complexes, thereby illustrating the defect of Rad51 recombinase loading to the Dox-induced DSBs. Finally, as a result of the impaired homology-mediated DNA repair, the increased numbers of hypodiploid (i.e., apoptotic) cells were observed in FGFR2-inhibited GISTs after Dox treatment. Collectively, our data illustrates for the first time that inhibition of FGF-signaling in IM-resistant GIST interferes with the efficiency of DDR signaling and attenuates the homology-mediated DNA repair, thus providing the molecular mechanism of GIST’s sensitization to DNA damaging agents, e.g., DNA-topoisomerase II inhibitors. View Full-Text
Keywords: gastrointestinal stromal tumor cells (GIST); imatinib mesylate (IM); resistance; FGFR-signaling; Rad51 recombinase; homology-mediated DNA repair; DNA-topoisomerase II inhibitors gastrointestinal stromal tumor cells (GIST); imatinib mesylate (IM); resistance; FGFR-signaling; Rad51 recombinase; homology-mediated DNA repair; DNA-topoisomerase II inhibitors
►▼ Show Figures 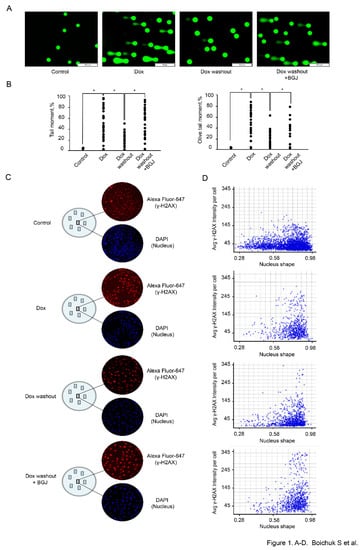