Role of the Hyaluronan Receptor, Stabilin-2/HARE, in Health and Disease
Previous Article in Special Issue

Nutrients and Porphyria: An Intriguing Crosstalk

From Environment to Genome and Back: A Lesson from HFE Mutations

The environment and the human genome are closely entangled and many genetic variations that occur in human populations are the result of adaptive selection to ancestral environmental (mainly dietary) conditions. However, the selected mutations may become maladaptive when environmental conditions change, thus becoming candidates for diseases. Hereditary hemochromatosis (HH) is a potentially lethal disease leading to iron accumulation mostly due to mutations in the HFE gene. Indeed, homozygosity for the C282Y HFE mutation is associated with the primary iron overload phenotype. However, both penetrance of the C282Y variant and the clinical manifestation of the disease are extremely variable, suggesting that other genetic, epigenetic and environmental factors play a role in the development of HH, as well as, and in its progression to end-stage liver diseases. Alcohol consumption and dietary habits may impact on the phenotypic expression of HFE-related hemochromatosis. Indeed, dietary components and bioactive molecules can affect iron status both directly by modulating its absorption during digestion and indirectly by the epigenetic modification of genes involved in its uptake, storage and recycling. Thus, the premise of this review is to discuss how environmental pressures led to the selection of HFE mutations and whether nutritional and lifestyle interventions may exert beneficial effects on HH outcomes and comorbidities. View Full-Text
Keywords: Hereditary hemochromatosis; HFE; iron metabolism; polyphenols; vitamins; miRNAs; insulin signaling Hereditary hemochromatosis; HFE; iron metabolism; polyphenols; vitamins; miRNAs; insulin signaling
►▼ Show Figures 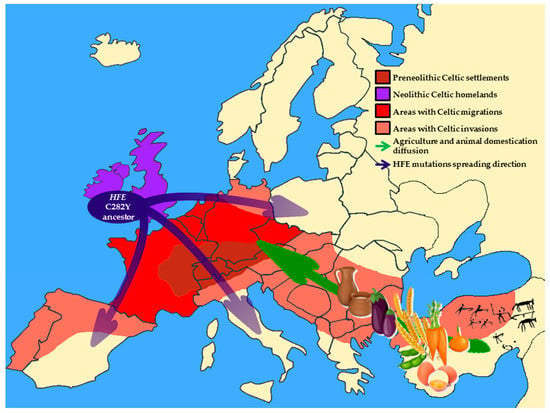