S-adenosylmethionine (SAMe) is involved in many transmethylation reactions in most living organisms and is also required in the synthesis of several substances such as monoamine neurotransmitters and the N-methyl-D-aspartate (NMDA) receptor. Due to its important role as an epigenetic modulator, we discuss in some length the process of DNA methylation and demethylation and the critical periods of epigenetic modifications in the embryo, fetus, and thereafter. We also discuss the effects of SAMe deficiency and the attempts to use SAMe for therapeutic purposes such as the treatment of major depressive disorder, Alzheimer disease, and other neuropsychiatric disorders. SAMe is an approved food additive and as such is also used during pregnancy. Yet, there seems to scanty data on the possible effects of SAMe on the developing embryo and fetus. Valproic acid (VPA) is a well-tolerated and effective antiepileptic drug that is also used as a mood stabilizer. Due to its high teratogenicity, it is contraindicated in pregnancy. A major mechanism of its action is histone deacetylase inhibition, and therefore, it acts as an epigenetic modulator, mainly on the brain. This prompted clinical trials using VPA for additional indications i.e., treating degenerative brain disease such as Alzheimer disease, dementia, HIV, and even cancer. Therefore, we discuss the possible effects of VPA and SAMe on the conceptus and early postnatally, during periods of susceptibility to epigenetic modifications. VPA is also used as an inducer of autistic-like behavior in rodents and was found by us to modify gene expression when administered during the first postnatal week but not when administered to the pregnant dams on day 12 of gestation. In contrast, SAMe modified gene expression when administered on day 12 of pregnancy but not postnatally. If administered together, VPA prevented the changes in gene expression induced by prenatal SAMe administration, and SAMe prevented the gene expression changes and autistic-like behavior induced by early postnatal VPA. It is concluded that both VPA and SAMe are powerful epigenetic modifiers with antagonistic actions on the brain that will probably be used in the future more extensively for the treatment of a variety of epigenetic diseases of the nervous system. View Full-Text
Keywords: S-adenosyl methionine; valproic acid; epigenetic modifications; gene expression; brain; pregnancy; methylation; demethylation; nervous system S-adenosyl methionine; valproic acid; epigenetic modifications; gene expression; brain; pregnancy; methylation; demethylation; nervous system
►▼ Show Figures 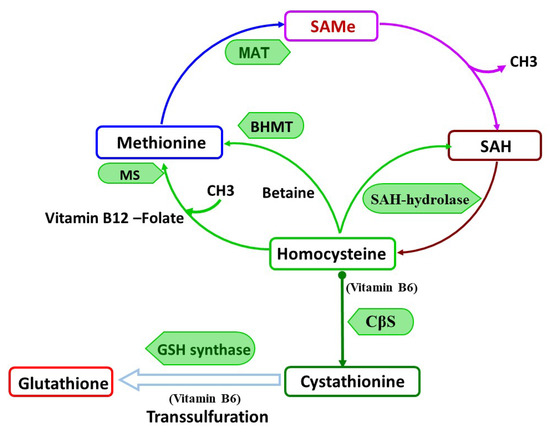