Dietary high-salt intake does not only increase blood pressure but also induce renal injury. Accumulating evidence indicates that inflammation in the kidney plays a key role in salt-induced renal damage, leading to end-stage renal disease [1,2,3]. N-acetyl-seryl-aspartyl-lysyl-proline, a natural tetrapeptide with anti-inflammatory properties, prevented salt-induced renal damage without affecting the blood pressure in Dahl salt-sensitive (DS) rats [4]. However, it is still unknown how inflammation evoked by a high-salt diet leads to renal injury.
Rac1 is a member of the RhoGTPase subfamily that acts as an intracellular molecular switch, transducing extracellular stimuli to modulate multiple signaling pathways [5]. A signaling cross-talk between mineralocorticoid receptor (MR) and the small GTPase Rac1 as a novel pathway that modulates MR function have been previously identified [6,7,8]. We have demonstrated that salt loading increases Rac1 activity in the kidneys of DS rats, which is associated with MR activation and upregulation of the MR target gene serum and glucocorticoid-regulated kinase (Sgk1) expression despite reduced circulating levels of aldosterone, a ligand of MR, resulting in salt-induced kidney injury [7]. By contrast, Rac1 and MR activities were appropriately decreased by salt loading in Dahl salt-resistant (DR) and normotensive rats, which were not accompanied by kidney injury [7]. In addition, administration of Rac1 inhibitor NSC23766 suppressed MR activation and the kidney damage induced by salt loading, which was as effective as eplerenone treatment, an MR blocker [7]. Hence, Rac1-MR activation plays a key role in mediating salt-induced kidney injury in DS rats.
Beraprost sodium (BPS) is an orally available and chemically stable prostaglandin I2 (PGI2) analog with established safety. It is clinically used to treat pulmonary arterial hypertension [9] and peripheral arterial disease [10]. Several lines of evidence indicate that BPS has the renoprotective effect in various pathological conditions including anti-glomerular basement membrane (GBM) glomerulonephritis [11], obesity-related kidney damage [12], diabetic kidney disease [13,14], unilateral ureteral obstruction [15,16], and contrast-induced nephropathy [17], which is attributed to the anti-inflammatory effect of BPS [11,14,16,18]. BPS also improved survival rates in anti-GBM glomerulonephritis rats and 5/6 nephrectomized chronic kidney disease (CKD) rats [19]. However, the mechanism for the renoprotective effect of BPS is still unknown. Of note, high salt induces renal inflammation in salt-sensitive hypertensive rats [1,2,20], and PGI2 possesses anti-inflammatory action [11,14,16,18]. Moreover, based upon the previous reports indicating that inflammation activates Rac1 [21,22,23], there are some possibilities that BPS inhibits salt-induced Rac1-MR activation by inflammation inhibition, resulting in the attenuation of salt-induced renal damage.
These observations led us to the plausible hypothesis that BPS is therapeutically useful for the treatment of salt-induced renal damage through the suppression of activated Rac1-MR pathway. To test the hypothesis in this study, we investigated the renoprotective effect of BPS in the DS rat, which is a commonly used model of salt-sensitive hypertension [24].

Animal care and treatment complied with the standards described in the Guidelines for the Care and Use of Laboratory Animals of the University of Tokyo (Tokyo, Japan). All studies were approved by the Institutional Animal Care and Use Committee of the University of Tokyo (RAC 140202, date: 1 July 2014). Five-week-old male DS rats were purchased from Japan SLC (Shizuoka, Japan), which were randomly divided into three groups as follows: a normal-salt (0.5% NaCl) diet group (NS, n = 11), a high-salt (8% NaCl) diet group (HS, n = 11), and a high-salt diet plus BPS (provided by Toray Industries, Inc., Tokyo, Japan, 750 mg/kg/day in drinking water), a PGI2 analog, treatment group (HS-BPS, n = 11). The dosages of BPS used were determined according to the renoprotective effects in previous studies [12,19]. The rats were fed either a normal-salt (MF diet, Oriental Yeast, Tokyo, Japan) or a high-salt (MF diet containing 8% NaCl, Oriental Yeast) diet for 3 weeks. The NS group was used as control. Body weight was recorded every week during the experimental period. All rats had free access to drinking water and food under temperature-controlled conditions and a 12-h light/dark cycle.

The systolic blood pressures of conscious rats were measured at 3 weeks using the tail-cuff method (BP-98A; Softron, Tokyo, Japan), as previously described [7,56]. Measurements were performed at daytime and the average of five serial measurements taken in a calm state was calculated for each rat. A dark cover was placed over animals to reduce stress.

This work was supported in part by Japan Society for the Promotion of Science (JSPS) KAKENHI grants 19K17732 (to D.H.) and 15H05788 (to T.F.). The study was also supported by the Japan Foundation for Applied Enzymology (to D.H.). 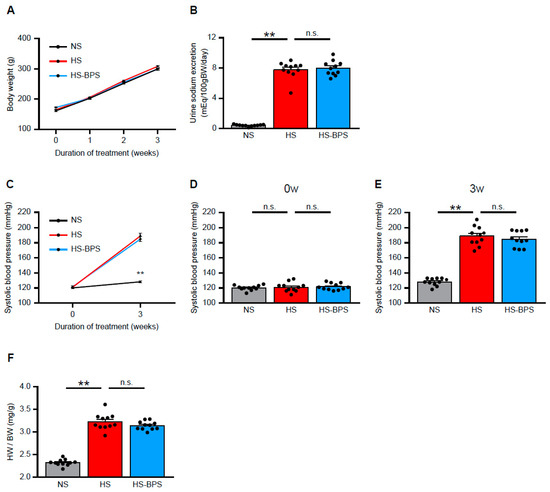 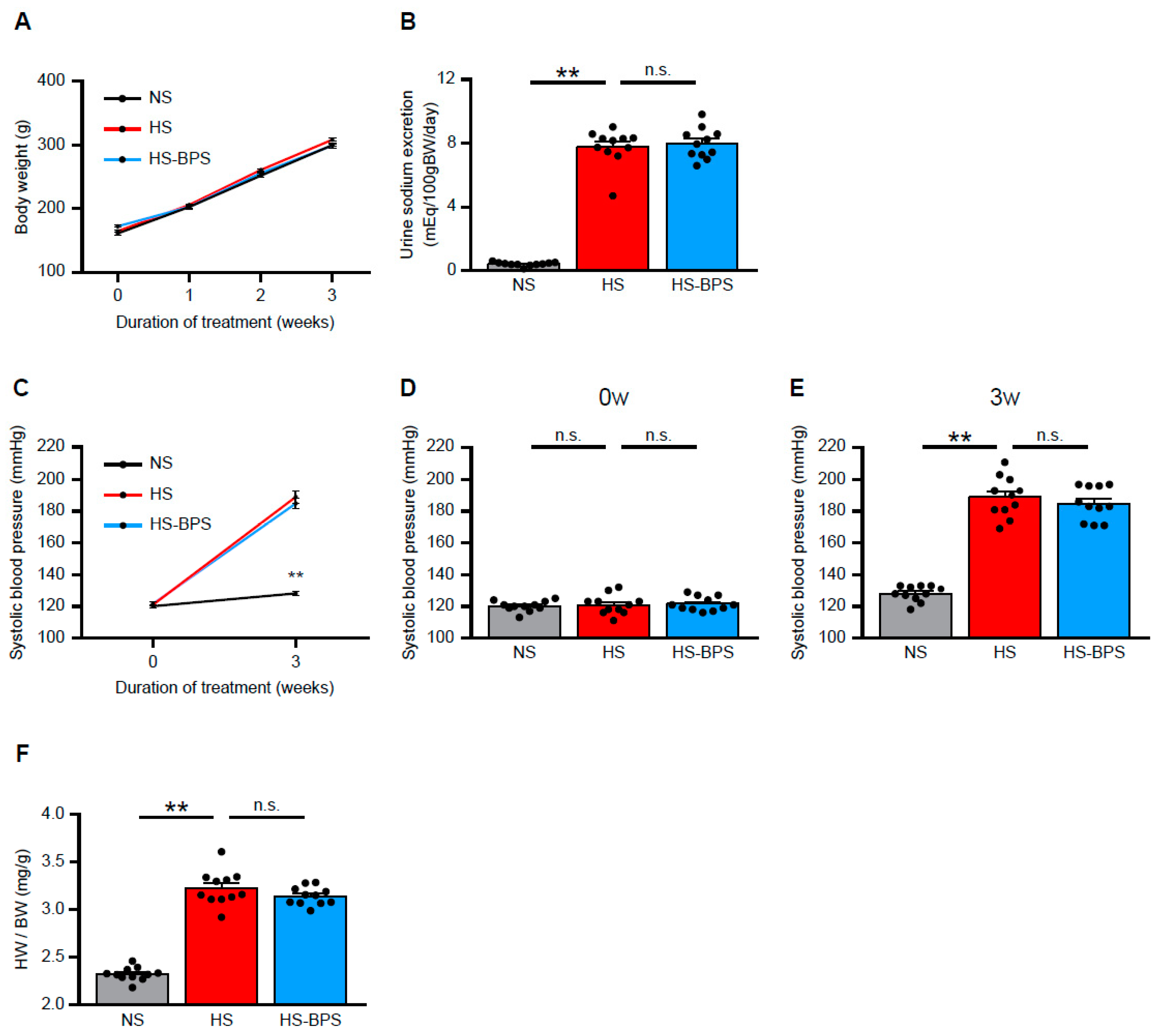 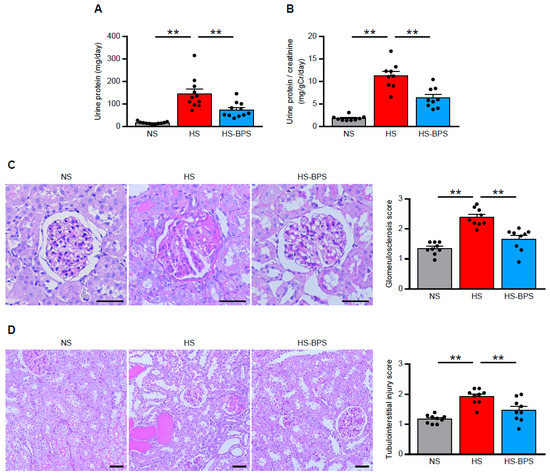 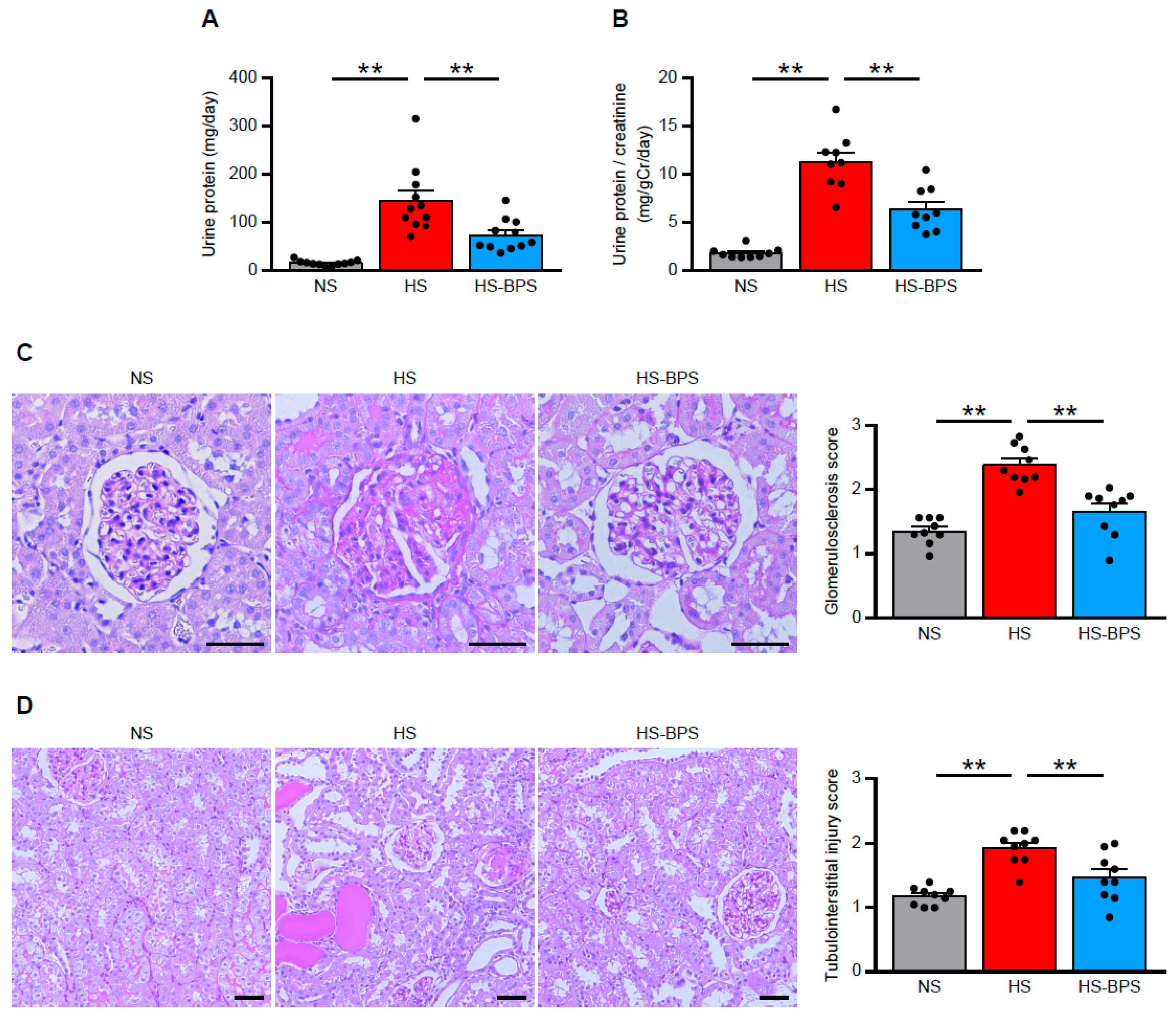 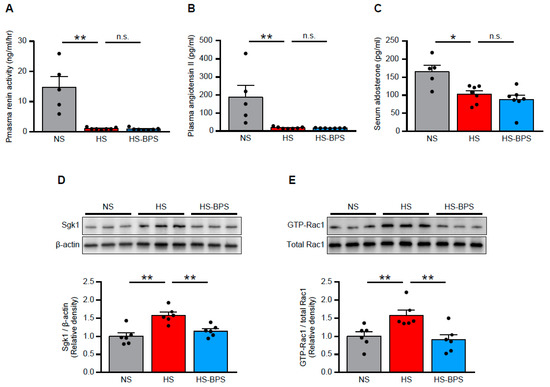 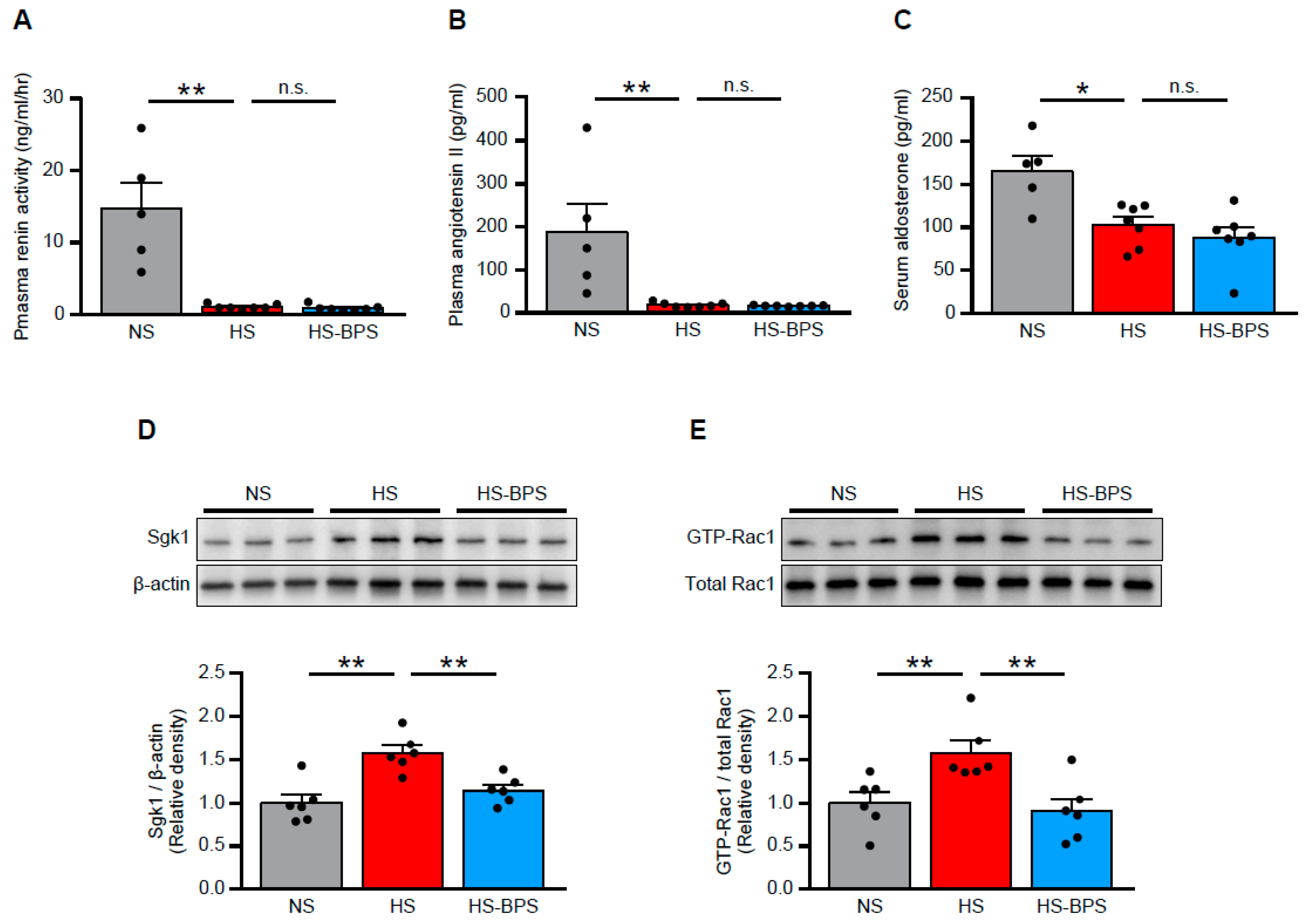 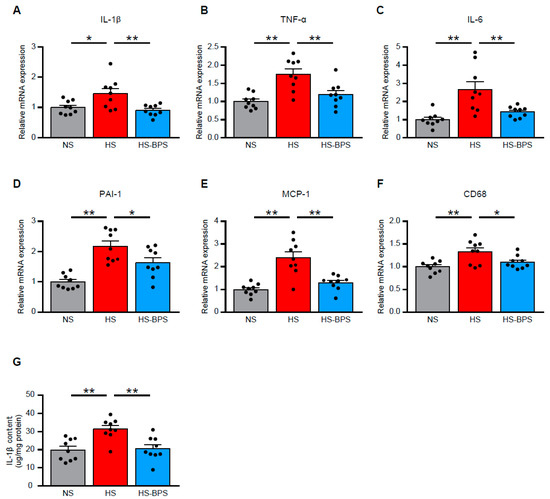 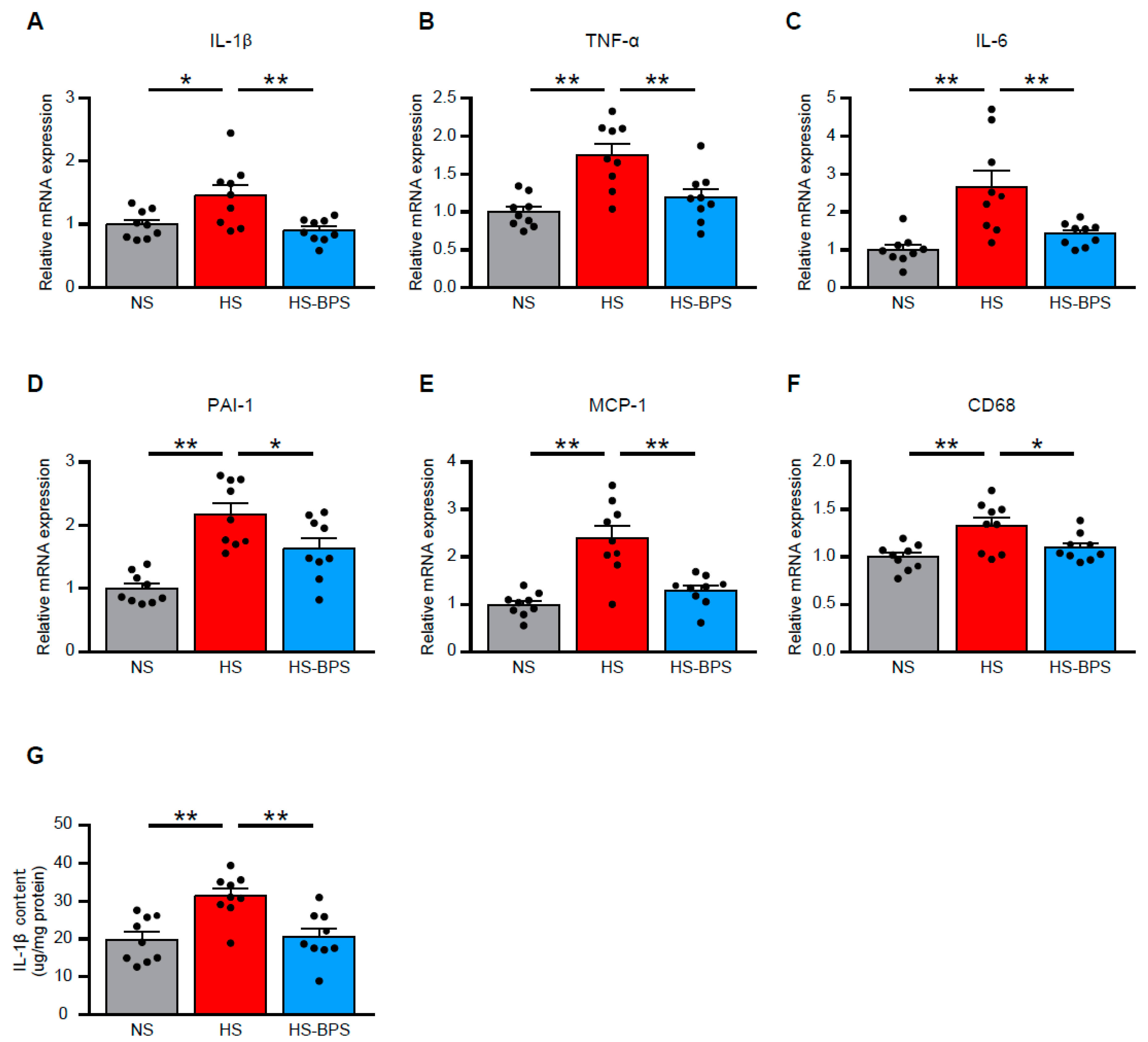 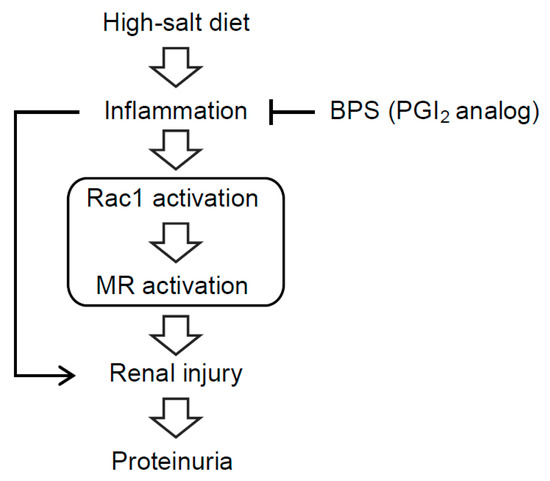 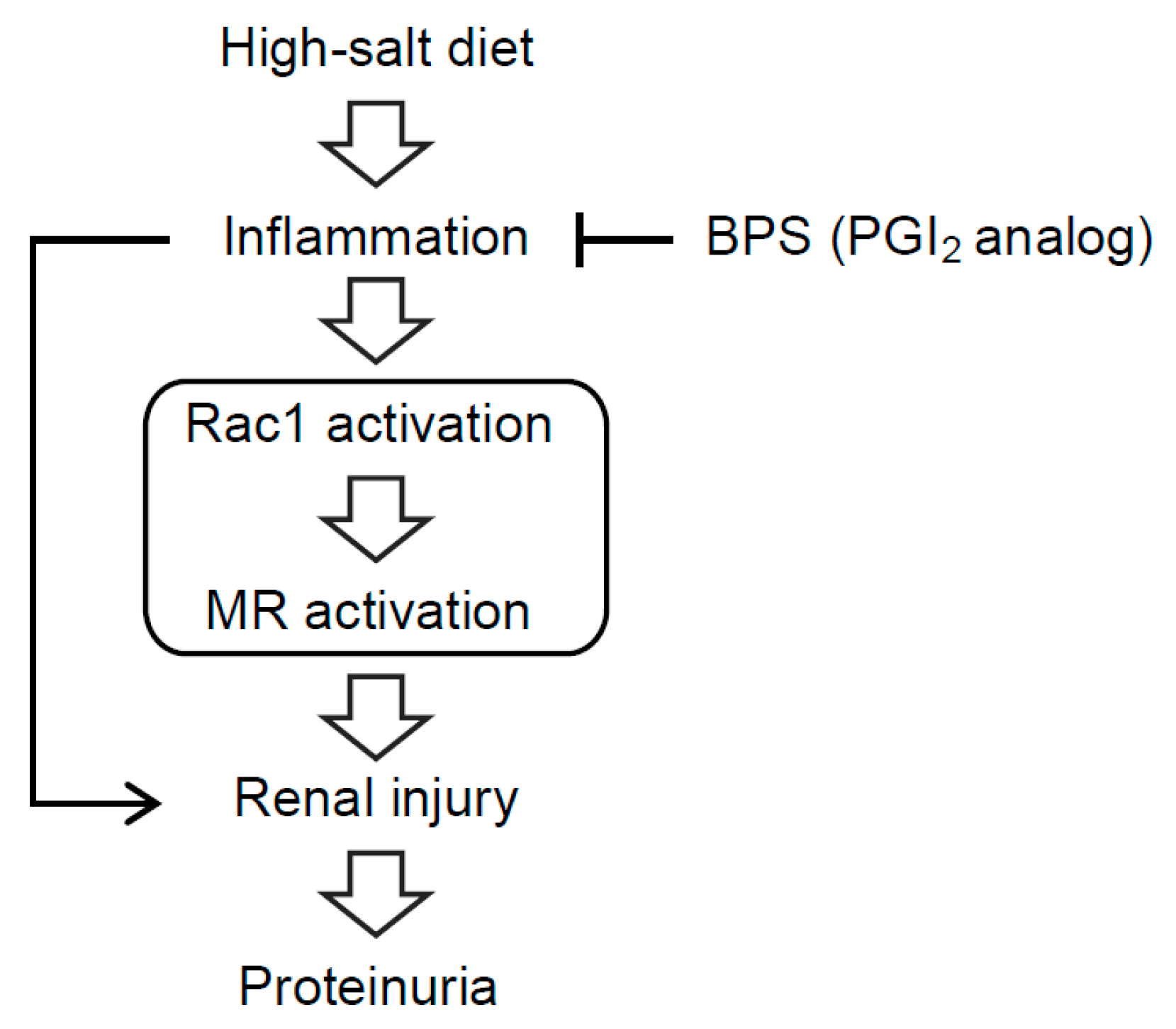